11:22pm: The deal is official, according to a Magic press release (via Twitter). 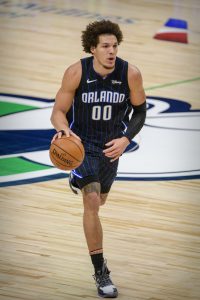 3:05pm: The 2025 first-round pick headed to Orlando in the trade will be top-five protected, tweets Zach Lowe of ESPN. That protection will remain the same in 2026 and 2027 if it doesn’t convey immediately.

11:24am: The Nuggets and Magic have reached an agreement on a trade that will send forward Aaron Gordon to Denver, sources tell Shams Charania of The Athletic (Twitter link).

Adrian Wojnarowski of ESPN (Twitter links) also hears that the two sides are in agreement, reporting that Denver will send Gary Harris, R.J. Hampton, and a protected 2025 first-round pick to Orlando in the deal. The Nuggets will also acquire Gary Clark in the trade, tweets Sam Amick of The Athletic.

Gordon, who has been one of the most frequently discussed trade candidates this month, was said at the start of the week to be drawing serious interest from the Rockets. The Celtics overtook Houston as the frontrunner to acquire the 25-year-old on Tuesday, with the Nuggets reportedly emerging as the favorite as of Wednesday night.

It’s the second trade agreement of the day for the Nuggets, who also struck a deal with Cleveland to acquire JaVale McGee. The moves will shore up a Denver frontcourt that was hit hard last offseason by the free agent departures of Mason Plumlee, Jerami Grant, and Torrey Craig.

While McGee will take over as Nikola Jokic‘s backup at the five, Gordon can play either forward position, and should help provide the club with some of the defensive versatility that was lost when Grant and Craig left. It’s a safe bet that Gordon will be tasked with guarding bigger forwards like LeBron James or Kawhi Leonard during the postseason.

As for the Magic, the Gordon trade is the latest in a series of deals that signal the organization’s intention to reset its roster and retool around Markelle Fultz and Jonathan Isaac. Orlando has also agreed to send Nikola Vucevic to Chicago and Evan Fournier to Boston.

According to earlier reports, the Celtics were offering Aaron Nesmith and a first-round pick as part of a package for Gordon. During conversations with the Timberwolves, the Magic wanted rookie Jaden McDaniels, but Minnesota was reluctant to part with him, per Michael Scotto of HoopsHype.

Instead, the Magic will get a package headlined by a future first-round pick and Hampton, who was selected with the 24th overall pick in the 2020 draft. The 20-year-old has logged mostly garbage-time minutes in his 25 NBA games so far, but is viewed as having considerable potential.

Orlando also gets Harris, who has been productive in the past but has an oversized contract, including a $19.6MM salary this season and a $20.9MM cap hit for 2021/22. He was included in the deal for salary-matching purposes.