The Bucks are a potential suitor for Jae Crowder, ESPN’s Zach Lowe said on his podcast (hat tip to RealGM). Milwaukee is interested in forwards in the Crowder mold that can guard multiple positions. They had an interest in a former Pistons forward, according to Lowe.

Crowder won’t participate in the Suns training camp as they look to move him.

Horst: Ingles May Return In December

SEPTEMBER 26: Nwora has officially re-signed with the Bucks, the team announced today in a press release. 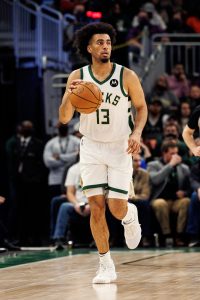 Nwora was selected with the No. 45 pick in 2020 out of Louisville. Though he played a relatively limited role with the club as a rookie, Nwora was a part of the team’s 2020/21 championship-winning roster.

During Bucks Media Day remarks to the press earlier today, team president Jon Horst alluded to the fact that Nwora was slated to join the team for the start of training camp Monday, tweets Jim Owzcarski of the Milwaukee Journal Sentinel.

The 6’8″ swingman will be the 15th player to receive a guaranteed 2022/23 salary from the Bucks, so the team’s regular season roster looks pretty much set.

There had been some uncertainty about whether Milwaukee would be willing to carry a 15th man into the regular season, since doing so will push the team’s salary further over the tax line. Unless a trade is coming before opening night, it appears the club is comfortable taking on that extra cost.

10:16am: As expected, Bolden received an Exhibit 10 contract, tweets Eric Nehm of The Athletic.

7:36am: The Bucks have signed free agent center Marques Bolden to a contract, according to the NBA transaction log at RealGM and the team’s official website.

While the terms of the deal aren’t known, it’s almost certainly a non-guaranteed training camp contract, likely with an Exhibit 10 clause. Milwaukee has been shuffling players on and off its roster within the last week as the club prepares for training camp and lines up players for its G League affiliate, the Wisconsin Herd.

Bolden, 24, has spent most of his professional career in the G League since going undrafted out of Duke in 2019. In 69 career appearances for the Cavaliers’ and Jazz’s NBAGL affiliates, he has averaged 10.2 PPG, 7.4 RPG, and 1.6 BPG in 23.1 minutes per contest.

The big man also spent time in the NBA with Cleveland from 2019-21, first on a 10-day contract and later on a two-way deal, playing a very limited role in seven games for the Cavs.

It’s unclear if Bolden will remain on the Bucks’ roster for training camp next week or if the team plans to waive him before then and have him eventually suit up for the Herd. For now, his G League returning rights are held by the Salt Lake City Stars, Utah’s affiliate, so a trade would be required for Wisconsin to acquire those rights.

The Bucks currently have 19 players under contract.

Badji was signed on Monday to an Exhibit 10 contract. Badji will be eligible for a bonus worth up to $50K if he spends at least 60 days with the Wisconsin Herd, Milwaukee’s G League affiliate.

A member of last season’s All-SEC First Team, Molinar appears likely to spend his first professional season with the Wisconsin Herd, the Bucks’ G League affiliate. His Exhibit 10 contract will put him in line for a bonus worth $50K if he spends at least 60 days with the Herd as an affiliate player.

Molinar will likely team up in Wisconsin with Alex Antetokounmpo and Rob Edwards, who have also been signed and waived by the Bucks within the last week.

The Bucks have also signed undrafted rookie Iverson Molinar to an Exhibit 10 deal, Hoops Rumors has learned. The news of his signing was first reported back in June, but wasn’t official until now.

Hoops Rumors can also confirm that Alex Antetokounmpo, who was recently waived by the Bucks, received an Exhibit 10 deal.

Exhibit 10 deals, which are non-guaranteed, would make Badji and Molinar eligible for a bonus worth up to $50K if they’re waived before the season starts and spend at least 60 days with the Wisconsin Herd, Milwaukee’s G League affiliate.