Hoops Rumors is breaking down the 2021 offseason for all 30 NBA teams, revisiting the summer’s free agent signings, trades, draft picks, departures, and more. We’ll evaluate each team’s offseason moves, examine what still needs to be done before opening night, and look ahead to what the 2021/22 season holds for all 30 franchises. Today, we’re focusing on the Golden State Warriors.

The Warriors look considerably different than they did the last time they made a deep playoff run, when they fell to the Raptors in six games during an injury-riddled 2019 NBA Finals matchup. The club is hoping that its revamped depth – including some talented young prospects, a couple solid three-point shooters on minimum deals, and one old, old friend – will be enough to help its veteran core of Stephen Curry, Draymond Green, and, at some point, Klay Thompson make another deep postseason run. 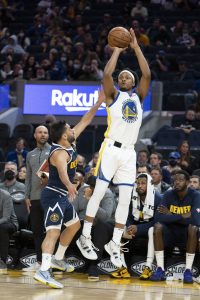 Most prominently, Golden State added two new lottery picks to its stable of veterans and youth, selecting 6’8″ forward Jonathan Kuminga from the G League Ignite and 6’6″ shooting guard Moses Moody out of Arkansas.

Those two picks – the seventh and 14th overall selections in the 2021 draft – were the subject of frequent trade speculation leading up to draft day, but the Warriors ultimately decided it made more sense at this point to hang onto them than to try to package them for a star, given the lack of viable options on the trade market.

Both Kuminga and Moody are viewed as intriguing long-term additions, though the Warriors probably aren’t counting on either teenager to make a significant contribution to a 2022 playoff push. Kuminga is already dealing with a knee injury that will likely sideline him to start the season.

2015 Finals MVP Andre Iguodala has returned to Golden State, following two seasons spent with the Heat and, technically, the Grizzlies, though he never suited up in Memphis. How much the 37-year-old can reasonably be expected to contribute on the floor in his 18th NBA season remains to be seen. The Warriors also took flyers on a pair of veteran wing shooters in Nemanja Bjelica and Otto Porter.

The forwards’ on-paper fit alongside Curry is intriguing, although there is a reason both were available on veteran’s minimum contracts. Bjelica is a career 38.7% shooter from deep, while Porter has connected on an impressive 40.2% of his triples. Last year, Bjelica struggled to stay on the floor for a competing Heat team that could have desperately used his floor-spacing during the 2021 playoffs, while Porter has appeared in just 42 games across the past two seasons due to fitness issues. If they can stay healthy and display some consistency, both vets could be useful rotation pieces.

The Warriors also let swingman Kelly Oubre join the Hornets in free agency after trading for him following the news of Thompson’s season-ending Achilles tear during the 2020 offseason. A solid athlete, Oubre never managed to develop a consistent outside shoot during his one-year tenure in Golden State, connecting on just 31.6% of his 5.2 long-range looks per night. The Warriors had hoped that Oubre would provide dependable help for Curry on the perimeter.

Thompson has missed two consecutive seasons with two of the worst injuries a player could suffer in basketball, an ACL tear and an Achilles tear. No one is expecting him to return to his All-Defensive peak when it comes to guarding the opposition’s best perimeter players, but the Warriors will need him to at least approximate his scoring output of years past if they hope to really threaten the top teams in the West this year.

With Thompson not expected to return until possibly December, the starting shooting guard position on the team remained up for grabs entering training camp. Jordan Poole has all but locked up the spot, averaging 23.3 PPG in four preseason contests.

Hyper-athletic second-year center James Wiseman, the No. 2 pick in the 2020 draft out of Memphis, flashed plenty of promise during his rookie season, but also missed nearly half the year after suffering a season-ending right meniscus tear that required surgery. The seven-footer appeared in just 39 contests last season, and appeared very much to be a raw prospect still in need of development. The timeline for his return, in addition to Thompson’s, remains fairly murky, and it’s unclear how much he’ll even be able to contribute to winning games during his age-20 season.

After initially refusing to get vaccinated against COVID-19, small forward Andrew Wiggins listened to his wallet and got the shot. He’ll be available for Golden State come opening night, and will be heavily leaned upon to score on the wing until Thompson’s return. Though he’s technically eligible for a veteran contract extension until October 18, a new deal for Wiggins seems very unlikely unless he’s willing to take a pay cut.

Hoops Rumors readers just barely voted in favor of Golden State besting an over/under of 48.5 wins, which feels somewhat optimistic. The team is riddled with question marks beyond its All-NBA point guard.

Last season, buoyed by outrageous scoring outbursts from Curry and the all-defense/no-shooting output of Green, Golden State was able to achieve a 39-33 regular season record, eighth in the West, but failed to secure a playoff spot in the play-in tournament. Stretched to an 82-game schedule, that record translates to 44 wins, which feels about right. Green himself, in a recent podcast, expressed his uncertainty regarding the championship pedigree of the team’s current roster.

Golden State is hoping that its new supporting cast, including several not-ready-for-prime-time players, will be enough to support Curry on offense until Thompson returns, ideally as a reasonable facsimile of the five-time All-Star who helped lead the Warriors to five consecutive Finals appearances.

Salary information from Basketball Insiders and Spotrac was used in the creation of this post. Luke Adams contributed to this report.