JULY 6: The Bulls have made it official with Drummond, announcing the deal on Twitter.

JUNE 30: The Bulls will add veteran center Andre Drummond to bolster their frontcourt, per Shams Charania of The Athletic (Twitter link). 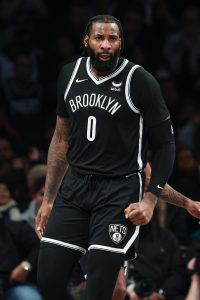 Adrian Wojnarowski of ESPN reports (Twitter link) that Chicago will ink Drummond to a two-year, $6.6MM contract, with a player option for 2023/24. A two-year deal at the veteran’s minimum would be worth $5.95MM, so presumably the Bulls – who don’t have the bi-annual exception available this season – are dipping into their mid-level to complete the signing.

The Drummond deal is the first reported free agent addition for Chicago during the 2022 offseason. The team is still hoping to re-sign two-time All-Star shooting guard Zach LaVine, an unrestricted free agent. Unsigned veteran free agent forward Danilo Gallinari has also been mentioned as a possibility for Chicago.

Additionally, the Bulls have a $5MM trade exception left over from a Daniel Theis sign-and-trade during the 2021 offseason it must use (or lose) by July 7.

Drummond, 28, is coming off an impressive bounce-back season split between the Sixers and Nets, and Chicago no doubt hopes he can help shore up the team’s frontcourt depth.

Selected by the Pistons with the ninth pick out of Connecticut in 2012, the 6’10” Drummond blossomed into a two-time All-Star for Detroit. Drummond agreed to a five-year maximum-salary contract with Detroit in 2016. He was eventually traded to the Cavaliers, before signing a one-year veteran’s minimum deal with the Lakers ahead of the 2020/21 season.

Playing as a reserve behind Sixers All-Star Joel Embiid to start the 2021/22 season on another minimum deal, Drummond saw limited touches on offense, but was still able to feast on the glass in limited minutes. Across 18.4 MPG, he averaged 6.1 PPG, 8.8 RPG, 2.0 APG, 1.1 SPG and 0.9 BPG in 49 contests with Philadelphia.

The Sixers included Drummond to the Nets as part of the team’s trade package for All-Star guard James Harden. With Brooklyn, Drummond enjoyed an expanded offensive role. He started in all 24 of his games with the Nets, averaging 11.8 PPG, 10.3 RPG, 1.4 APG, 1.0 BPG and 0.9 SPG during 22.3 MPG.