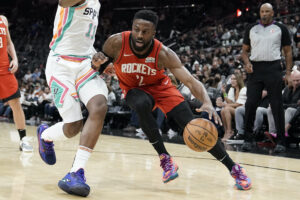 All three players were sent from Houston to Oklahoma City last month, but that trade was more about cutting costs for the Thunder than it was about the players involved. Oklahoma City also received Sterling Brown in that deal and waived him too, so none of the four players acquired from the Rockets are still under contract with the Thunder (Houston has also waived the four players it acquired in the trade).

Three cuts were required for the Thunder because they had been carrying 18 players on guaranteed contracts after signing Isaiah Joe earlier today.

The Thunder now have 15 players on standard contracts and a pair on two-way deals, so their roster is set for the regular season.

As for Joe, his new deal with the Thunder is a three-year, minimum-salary contract that is fully guaranteed for the first season and non-guaranteed in year two, with a third-year team option, Hoops Rumors has learned. Oklahoma City used a portion of its mid-level exception to complete the signing, which head coach Mark Daigneault expressed enthusiasm about in a Monday media session.

“He’s a guy that our scouts and our people have liked for some time,” Daigneault said, per Joe Mussatto of The Oklahoman (Twitter video link).

OCTOBER 16: The Thunder have officially signed Joe, the team announced in a press release. Oklahoma City won’t have to finalize its cuts until Monday and has a full 20-man roster for now.

OCTOBER 15: The Thunder are finalizing a multi-year contract with Isaiah Joe, tweets Shams Charania of The Athletic.

Swingman David Nwaba will be among the players waived to make room on the roster, sources tell Charania (Twitter link).

Joe cleared waivers earlier today after being released Thursday by the Sixers, who selected him with the 49th pick in the 2020 draft. The 23-year-old shooting guard spent the past two years in Philadelphia and averaged 3.6 points and 1.0 rebounds in 55 games last season.

Nwaba was acquired from the Rockets in an eight-player trade in September after playing 46 games for Houston last season. Trey Burke and Marquese Chriss remain on Oklahoma City’s roster, but with more cuts remaining it’s possible that all eight players in that deal will end up on waivers.

SEPTEMBER 30: Both teams have announced that the trade is now official. However, the terms of the deal are slightly different than was previously reported. 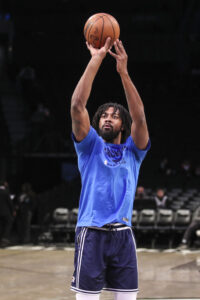 SEPTEMBER 29, 9:15pm: The Rockets intend to waive Jerome, according to Jonathan Feigen of The Houston Chronicle. Feigen adds that Favors and Maledon are considered the most likely among Houston’s new additions to claim spots on the 15-man regular season roster.

As Wojnarowski observes, Oklahoma City will create two trade exceptions in the deal. In pure salary terms, the exchange will help the Thunder get $10MM under the league’s punitive luxury tax cap threshold. Wojnarowski notes that Favors in particular is tradable among the returning players arriving in Houston, as a solid backup big man on an expiring $10.2MM salary.

Jerome and Maledon are both young players on modest contracts with remaining potential upside. Harkless, like Favors, is a veteran on an expiring deal.

On the Rockets’ side of the transaction, Houston is acquiring a future second-round draft pick in exchange for taking on some added salary, as Woj details.

According to Kelly Iko of The Athletic (via Twitter) if that Hawks 2025 second-rounder lands in the top 40 and is protected, Houston will instead receive the second-best of the Thunder’s, Mavericks’, and Sixers’ 2026 second-round picks.

Given that No. 2 draft pick Chet Holmgren has been ruled out for the year with a Lisfranc injury in his right foot, and with the best player in this new trade being sent away from the team, it appears the Thunder are once again prioritizing a year of youthful development, as they look to the 2023 draft lottery to build out their impressive young roster.

Oklahoma City added four rookies in the 2022 draft, including two additional lottery picks beyond Holmgren. The Thunder have been in full-on rebuild mode since the end of the 2019/20 season, winning a total of 46 games over the last two years.

Houston has also been in the asset-collection and draft lottery-targeting phase of its journey since 2020. The team went 37-127 from 2020-22. This year, the Rockets drafted intriguing rookie power forward Jabari Smith with the third pick out of Auburn. They also made two other selections in the first round.

It appears unlikely that every player in this deal will be with their new clubs when the regular season opens. Bobby Marks of ESPN (via Twitter) notes that both teams will still have 18 guaranteed contracts on their books following this deal. Per league rules, they’ll each need to get down to 15 players by October 17.

The Rockets have received multiple trade offers for veteran shooting guard Eric Gordon, but have turned them down, according to Kelly Iko of The Athletic. Iko suggests that unless they get an offer that “simply can’t get ignored,” it’s becoming more plausible that the Rockets will simply hang onto Gordon through the trade deadline.

Houston is in the early stages of a rebuild and Gordon is having his best shooting season as a pro, with career highs in FG% (.506) and 3PT% (.452) — the time seems right to make a deal. However, Iko says the team admires how Gordon carries himself on and off the court and believes he’s a positive influence on Houston’s young players, so there’s no rush to ship him out.

It still seems possible that Gordon will be on the move by February 10 if a potential trade partner meets the Rockets’ reported asking price of a first-round pick. But if Gordon remains in Houston, the club will have more opportunities to trade him before his contract expires — he’s owed a $19.6MM guaranteed salary in 2022/23 and a $20.9MM non-guaranteed salary in ’23/24.

Here’s more on the Rockets:

The lucrative four-year, $105MM rookie extension that power forward Jaren Jackson Jr. signed this week with the Grizzlies is very much predicated on his ceiling. Evan Barnes of the Memphis Commercial Appeal details why he considers the agreement mutually beneficial to both sides in a new piece. A big reason: the contract will decrease in value every season once it kicks in, which will give Memphis room to further bolster the roster.

“I’m locked in, I’m blessed, I’m happy I get to be here and be around people I love,” the 6’11” big man said of the deal and his chemistry in Memphis. “It’s a good experience.”

Due to Jackson’s extensive injury history, the agreement contains injury protection related to his left knee, but it only applies to the last year of the deal (for 2025/26), a source informed John Hollinger of The Athletic.

AUGUST 8: The Rockets have officially signed Nwaba, according to Jonathan Feigen of The Houston Chronicle. 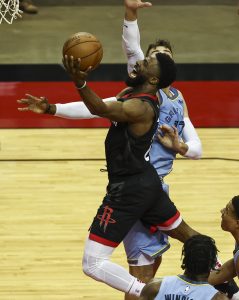 The journeyman Nwaba, 28, has suited up for several clubs after going undrafted out of California Polytechnic State University in 2015. Though not much of a jump shooter, Nwaba proved his prowess on the other end of the floor, during promising stints with the Lakers, Bulls, and Cavaliers.

20 games into his lone season with the Nets, Nwaba suffered a season-ending right Achilles tendon tear in December 2019. After being waived by the Nets, Nwaba signed a two-year deal with the Rockets ahead of the 2020 Orlando “bubble” season restart. The Rockets then exercised their $1.82MM team option on the small forward/shooting guard before the 2020/21 season.

Houston will be Nwaba’s first long-term NBA home, the first club for which he has played for longer than one season, though he has technically been on the Rockets for portions of two seasons already.

The surgical procedure would likely sideline Nwaba for approximately six weeks. Nwaba originally sprained his wrist in a February 28 game, but he tried to tough it out with so many of his teammates unavailable due to injuries.

Nwaba re-aggravated the wrist injury on Sunday against Boston, which put surgery back on the table. Nwaba has appeared in 30 games this season, averaging 9.2 PPG and 3.9 RPG. He’s playing for his fifth team in as many seasons.

Houston picked up its $1.824MM option on Nwaba in November. He was signed to a two-year deal prior to the restart. He began last season with the Nets but suffered a torn Achilles tendon in December and was waived shortly thereafter.

Mavericks forward James Johnson, who left the team over the weekend to attend a personal matter in Wyoming, missed a mandatory COVID-19 test and will be sidelined due to the health and safety protocols until he registers a certain number of negative tests, head coach Rick Carlisle said on Tuesday, per Callie Caplan of The Dallas Morning News.

Johnson is now back in Dallas, but he won’t be active for any of the Mavericks’ three remaining games this week, according to Brad Townsend of The Dallas Morning News, who tweets that the earliest the veteran forward could be cleared is for the March 24 contest against Minnesota.

Kevin Porter Jr. has been one of the few bright spots in a miserable season for the Rockets, writes Jonathan Feigen of The Houston Chronicle. Porter has been spectacular in his first two games since being recalled from the G League, averaging 20.0 points, 4.0 rebounds and 9.0 assists.

Houston acquired Porter for a conditional second-round pick in January after he wore out his welcome in Cleveland due to off-court issues. He was a small forward with the Cavaliers, but the Rockets have shifted him to point guard after having him experiment with the position with Rio Grande Valley.

“He does have like a sereneness to him,” said coach Stephen Silas. “He is just composed for a young kid, doesn’t get too high, too low, That’s a steadying influence on the rest of the group, When you have the guy who has the ball in his hands most of the time, which it was (Friday) for him, to kind of play in that manner and not get rattled by a run by the opposing team or a turnover or a bad play, just kind of have the next play mentality, it’s pretty cool for a young guy to be that way. He’s played two games for us. We’re not going to overstate anything. But we think we got something there.”