The Trail Blazers will keep Dennis Smith Jr. on their roster through the salary guarantee date, ensuring that he receives his full salary for 2021/22, sources tell Adrian Wojnarowski of ESPN (Twitter link).

Wojnarowski also provides another updates on the Trail Blazers, tweeting that center Cody Zeller is expected to be available vs. Cleveland on Friday night. Zeller, who hasn’t played since December 6, missed time due to a knee injury and a stint in the health and safety protocols, but it appears he’s been cleared to return on both fronts.

6:14pm: The Bucks have officially signed Matthews and requested waivers on Kalaitzakis, the team announced. Matthews’ contract is non-guaranteed, a source tells Eric Nehm of The Athletic (Twitter link). 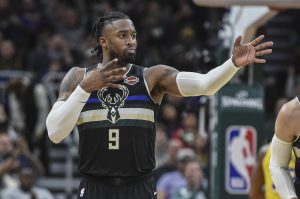 It’s another win-now move for the defending champions, who signed center DeMarcus Cousins on Tuesday. The Bucks will be on the hook for the guaranteed portion of Kalaitzakis’ salary — he has a partial guarantee of $462,629. However, he’s already earned a good chunk of that amount by this point in the season, which makes it a very understandable move from both a basketball and financial perspective.

Matthews was a top-tier 3-and-D player in the early part of his career prior to tearing his Achilles tendon in 2015. He’s never put up the same type of efficient offensive numbers since suffering the injury, but he’s still regarded as a good defensive player and is a highly respected veteran. In 849 career games (739 starts), he holds career averages of 12.6 PPG, 2.9 RPG, 2.1 APG, and 1.0 SPG on .421/.379/.824 shooting.

Kalaitzakis, the 60th pick in the 2021 draft, was signed to a partially guaranteed, three-year deal ahead of his rookie season. The Greece native appeared in nine games for the Bucks for a total of 48 minutes, putting up modest stats of 1.8 PPG and 0.9 RPG in 5.3 MPG. Evidently Milwaukee did not see enough from the 22-year-0ld to justify keeping him on a standard contract.

It’s very unlikely that he gets signed by a team with an open roster spot, as that list is comprised of either contending teams or teams right against the luxury tax, or both. Perhaps a two-way spot could be possible, but all 60 of those spots are taken right now, so that would require a team to waive a current two-way player. Kalaitzakis’ most realistic path back to the NBA is probably through the G League, but returning to Europe could be a viable possibility, too.

12:44pm: The Bucks have officially signed Georgios Kalaitzakis, the last pick in this year’s draft, to his first NBA contract, the team announced today in a press release. According to Eric Nehm of The Athletic (Twitter link), it’s a three-year deal.

A 6’8″ guard/forward from Greece, Kalaitzakis has been under contract with Panathinaikos since 2016, having spent four seasons with the Greek club and one year on loan to Nevezis Kedainiai in Lithuania in 2019/20. The Pacers drafted the 22-year-old with the No. 60 pick on behalf of the Bucks, sending his rights to Milwaukee in a trade involving the No. 31 selection.

Assessing the pick on draft night, ESPN’s Jonathan Givony praised Kalaitzakis’ physical tools, positional versatility, and “terrific” frame, but cautioned that he’s an average decision-maker and shooter whose stock leveled off over the last couple years due to his lack of playing time for Panathinaikos. Kalaitzakis averaged just 2.6 PPG and 1.0 RPG in 27 Greek League and EuroLeague games in 2020/21.

Milwaukee used a portion of its mid-level exception to complete the signing, which allowed the team to offer Kalaitzakis more than just two years. The Bucks, who also used $4MM of their mid-level on George Hill, aren’t hard-capped because they haven’t spent more than the $5.89MM taxpayer portion of the MLE.

Unlike a veteran or undrafted free agent, Kalaitzakis will only count for about $926K for tax purposes, assuming he signed for the rookie minimum, which should help keep the Bucks’ year-end tax bill in check.

JULY 30: The trade is now official, according to a press release from the Bucks.

Isaiah Todd was selected with the No. 31 pick, but he’s being rerouted to the Wizards along with Aaron Holiday in a separate trade. The Bucks, meanwhile, used the No. 54 pick on Sandro Mamukelashvili and the No. 60 selection on Georgios Kalaitzakis.

JULY 29: The Bucks have agreed to trade the No. 31 pick in tonight’s draft to the Pacers, according to Shams Charania of The Athletic (Twitter link), who reports that Milwaukee is received the Nos. 54 and 60 picks in return, along with two future second-round picks.

The Bucks had entered the night with only the No. 31 pick, having agreed to swap their first-round selection for Houston’s second-rounder in the P.J. Tucker trade at this year’s deadline. They’ll now have a pair of picks right near the end of the draft, which they could use to select a potential two-way player or low-cost roster player.

The Pacers, meanwhile, give up a couple future picks in order to move up to the top of the second round tonight. They now control the 13th and 31st overall selections.

According to Eric Nehm of The Athletic (Twitter link), the two future second-rounders Milwaukee receives will be as follows:

Sunday marks the deadline to withdraw from the NBA draft, and a handful of international players have reached their decisions. The date doesn’t affect college players because the NCAA set an Aug. 3 deadline for players to remove their names from the draft and retain their eligibility.

Marquette forward Brendan Bailey has decided to remain in the draft, the university announced in a press release. Coach Steve Wojciechowski delivered the news about Bailey, who entered the draft pool in April.

A sophomore, Bailey played 64 games in two seasons for the Golden Eagles, averaging 5.1 points and 3.4 rebounds per night. The 22-year-old did a two-year Mormon mission after high school and didn’t join the team until the 2018/19 season.

“After counseling with my family, I have decided to forgo my junior and senior years and pursue a career in professional basketball,” Bailey added. “This has always been a dream of mine and Marquette has helped prepare me to make this dream a reality.  Thank you Marquette, you will always have a special place in my heart.”

Euro guard Georgios Kalaitzakis has submitted paperwork to make himself eligible for the draft, ESPN’s Jonathan Givony reports. Kalaitzakis is ranked as the No. 96 prospect in the ESPN Top 100. The native of Greece averaged 12.2 PPG, 4.3 RPG and 2.3 APG in 29 MPG for Nevezis in Lithuania this season. The 6’7” Kalaitzakis led the U20 European Championship in scoring last summer at 19.7 PPG.

Kostas Antetokounmpo opted to remain in the draft prior to Monday afternoon’s early-entry deadline, ESPN’s Jonathan Givony tweets. The 6’10” forward, Giannis Antetokounmpo‘s brother, cancelled all of his remaining scheduled private workouts, Givony adds. That suggests that he might have a guarantee from some team to draft him.

The Dayton freshman averaged a mere 5.2 PPG and 2.9 RPG in 15.1 MPG during his lone college season. Givony has the younger Antetokounmpo ranked No. 57 in his latest Top 100 rankings.

We have other early-entrant decisions to pass along:

USC big man Chimezie Metu has decided to enter the 2018 NBA draft, he announced last week (via Twitter). As Joey Kaufman of The Orange County Register details, the decision was expected, since Metu had sat out this month’s National Invitation Tournament in order to avoid a potential injury as he prepares for his professional career.

Metu, a junior, is expected to graduate early this spring and will forgo his final year of NCAA eligibility. After deciding last spring to return to USC for another season, Metu averaged 15.7 PPG, 7.4 RPG, and 1.7 BPG in 34 games. He currently comes in at No. 37 on Jonathan Givony’s big board at ESPN.com.