An announcement on Gregg Popovich’s replacement regarding Team USA’s head coaching vacancy probably won’t come until closer to the end of the calendar year, Marc Stein of Substack reports. Previously, the opening was expected to be filled by the start of the NBA season. The timeline for completing the search has been pushed back for procedural reasons, according to Stein, who previously reported that Steve Kerr is the most likely successor.

Joakim Noah, who will be honored by the Bulls during Thursday night’s game vs. the Knicks, has been named a “Bulls Ambassador,” the team announced in a press release. According to the club, Noah will work with the organization to “build relationships with people throughout Chicago and across Bulls Nation.”

“I’m truly humbled to be honored by both the team and city that I have always loved and respected,” Noah said in a statement. “Even more so to be able to celebrate tonight with family, friends, former players and coaches, and most of all – the Bulls fans who helped drive my energy throughout my years in a Bulls uniform at the United Center. It means so much to me that I’m now a Bull for life. I love you all and am thrilled tonight to solidify my continued connection with the Bulls and the city of Chicago, in this new chapter of my life.”

The ninth overall pick in the 2007 draft, Noah spent the first nine seasons of his 13-year NBA career in Chicago. Although he never averaged more than 12.6 PPG in a season, he was a difference-maker for the Bulls, earning three All-Defensive nods and two All-Star appearances.

Noah’s best year came in 2013/14, when he was named the NBA’s Defensive Player of the Year and was voted to the All-NBA First Team. The Bulls made the playoffs in seven consecutive years during his time with the team, appearing in the Eastern Finals once. Noah announced his retirement earlier this year.

Noah’s ambassador role sounds like a fairly casual one, focused primarily on fan outreach. However, if he has interest in transitioning into coaching or a front office position in the future, I imagine the Bulls would be open to accommodating him.

The top-heavy Heat could benefit from their two-way players proving their NBA mettle sooner rather than later. Ira Winderman of the South Florida Sun Sentinel wonders if either of their two two-way players, guards Caleb Martin or Marcus Garrett, could find their way onto Miami’s 15-man roster by the end of the year.

Because of the continuing COVID-19 pandemic, two-way player rules no longer have restrictions on how frequently two-way players can practice or travel with their NBA clubs. Winderman thinks Garrett will see more run with the Heat’s G League affiliate, the Sioux Falls Skyforce, but that Martin could carve out a fringe rotation role at the next level.

There’s more out of the East:

Veteran big man Joakim Noah is “effectively” retiring as a player, sources tell Shams Charania of The Athletic (Twitter link). According to Charania, the plan is for Noah to eventually retire as a Bull. 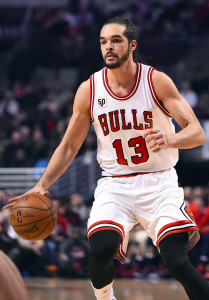 Noah, who turned 36 last Thursday, spent nine of his 13 seasons with the Bulls after being selected by the team with the ninth overall pick in the 2007 draft. His best seasons came in Chicago, where he was the anchor of the team’s frontcourt under head coach Tom Thibodeau, playing alongside Derrick Rose, Jimmy Butler, and Luol Deng.

Noah earned an All-Star berth, as well as a spot on the All-Defensive First Team, in both 2013 and 2014. He was named the NBA’s Defensive Player of the Year for the 2013/14 season and was a member of the All-NBA First Team that year as well. He also received an All-Defensive Second Team nod in 2011.

The former Florida Gator standout had a decorated college career before entering the NBA, winning back-to-back NCAA championships in 2006 and 2007 under head coach Billy Donovan.

Following his stint with the Bulls, Noah signed a four-year, $72MM contract with the Knicks during 2016’s infamous free agency period. He appeared in just 53 total games across two seasons in New York before being waived and stretched — his annual $6.4MM cap hits remain on the Knicks’ books through 2021/22.

Noah also enjoyed brief stints with the Grizzlies in 2018/19 and Clippers in ’19/20. When Noah was waived by Los Angeles at the start of training camp in December, agent Bill Duffy said his client would likely end up retiring.

When Noah officially signs a ceremonial contract with Chicago to retire as a Bull, he’ll be following in the footsteps of his former teammate Deng, who did the same thing in 2019.

While 25th overall pick Immanuel Quickley has shown signs he could be the Knicks’ answer at point guard, lottery pick Obi Toppin has gotten off to a surprisingly slow start to his NBA career, Mike Vornukov of The Athletic writes. The No. 8 pick is averaging 12.0 MPG after coming into the draft with the reputation as the most NBA-ready player in his class, Vornukov points out. Part of the problem is he’s been used as a big wing, rather than as a rim runner and pick-and-roll threat, Vornukov adds.

We have more on the Knicks:

10:09 pm: The Clippers have officially announced in a press release that they’ve waived Noah. 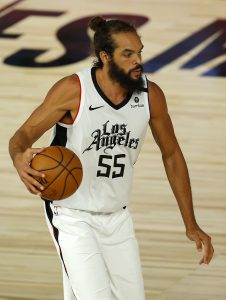 In a less expected development, Noah’s agent at BDA Sports, Bill Duffy, told Wojnarowski that the 6’11” center will likely retire rather than seek a basketball home elsewhere for 2020/21. Though the 35-year-old big man struggled during his lone Los Angeles season, he had a productive run as an energizing reserve with the Grizzlies the year prior.

“What an illustrious career for Joakim,” Duffy reflected. “It’s been my honor to represent Joakim through his journey.”

After being drafted by the Bulls with the ninth pick in the 2007 draft, Noah went on to make two All-Star teams and help lead a culture change in Chicago, transforming the team into an energetic, defensive-first behemoth.

Noah’s crowning individual accolade in the NBA was being named Defensive Player of the Year for the 2013/14 season. He also made the All-NBA First Team that season and finished with the fourth-most MVP votes that year (ahead of James Harden). During that standout season, Noah averaged 12.6 PPG, 11.3 RPG, 5.4 APG, 1.5 BPG, and 1.2 SPG across 80 games.

Noah signed a lucrative four-year, $72MM deal with his hometown Knicks during the free agency boom of 2016. The union was ultimately cut short ahead of the 2018/19 season, when New York opted to waive and stretch the rest of Noah’s deal. The club will be paying him $6.4MM during both the 2020/21 and 2021/22 seasons, as Stefan Bondy of the New York Daily News tweets.

The Bulls will likely consider honoring the unique big man in much the same way they paid tribute to his long-time teammate, former All-Star Bulls forward Luol Deng. Chicago inked a one-day contract with Deng in October 2019 so that he could officially retire as a Bull. Noah has certainly earned a similarly hallowed place in the hearts of Bulls fans to merit such a tribute.

Bobby Marks of ESPN tweets that this latest move means that the Clippers now have 13 guaranteed deals on their books, and currently find themselves a crucial $2.2MM below the league’s restrictive hard cap.

The Bulls‘ hiring of Billy Donovan as their new head coach was met with positive reviews by rival executives and by agents of Bulls players alike, according to Michael Scotto of HoopsHype. One Eastern Conference GM who spoke to Scotto pointed out that Donovan has yet to coach a team without a “strong personality,” meaning it will be interesting to see how he shapes Chicago’s young core.

“Looking at the other jobs for Billy, the only one that might have been better for him is New Orleans, but I can see why he went with Chicago,” the GM told HoopsHype. “They have young talent, lots of flexibility, a great city, and solid ownership.”

“It’s great,” an agent said of the Donovan hire. “He or Kenny Atkinson would’ve been good choices. They can only go up. They have a lot of talent and underachieved, so he can look really good when they do better.”

Sixers star Ben Simmons has undergone a fundamental change in his thinking when it comes to shooting threes, according to head coach Brett Brown, as relayed by ESPN’s Tim Bontemps.

Simmons has reached a new level of familiarity behind the arc, becoming more and more comfortable with taking three-pointers as the year’s progressed. He attempted a pair of threes in the team’s scrimmage against Memphis on Friday, connecting on one in the corner.

“Just playing,” Simmons said. “We’ve been practicing, working on just finding that corner. I’m very comfortable over there, and I’ve been shooting those shots, so I’m glad my teammates are finding me.”

Brown has used Simmons at power forward since landing in Orlando, testing a lineup that features Shake Milton, Josh Richardson, Tobias Harris, Simmons and Joel Embiid in limited time. The team is hopeful Simmons can build on his new position and thinking in the longterm, especially in a league primarily centered on spreading the floor.

“I get excited [watching it] … He doesn’t flinch,” Brown said. “The sport told him, ‘I’m open, nobody is guarding me, shoot it,’ and he did. There was no hesitation about what’s next, or, ‘What decision do I have to make now?'”

There’s more out of the Atlantic Division today:

There are a few players who showed up on the list of official rosters released on Monday by the NBA who still haven’t reported to the Walt Disney World campus. However, more players continue to arrive by the day.

According to Kyle Goon of The Orange County Register (Twitter link), Clippers forward Marcus Morris is at the team’s Tuesday morning practice today, having reported to the campus and cleared his quarantine period. His twin brother Markieff Morris will be joining the Lakers soon, Marcus tells Marc J. Spears of The Undefeated (Twitter link). Dave McMenamin of ESPN tweets that Markieff is expected to arrive at the campus today and will begin his initial quarantine.

Meanwhile, Kings forward Harrison Barnes, who tested positive for COVID-19 earlier this month, could depart for Orlando as soon as today if he returns one more negative coronavirus test, Spears reports (via Twitter).

Finally, Ricky Rubio, Aron Baynes, Elie Okobo, and Jalen Lecque didn’t make the initial trip to Orlando two weeks ago with the Suns and still hadn’t practiced with the club as of Sunday, sources tell Duane Rankin of The Arizona Republic. A pair of Suns players tested positive for the coronavirus nearly a month ago, but it’s not clear if any or all of the delayed arrivals are related to COVID-19.

The Warriors will need to consider free agent backup point guard candidates during their upcoming offseason. Since Golden State will be stretched thin due to some exorbitant contracts to the team’s top four players, The Athletic’s Anthony Slater makes the case for 28-year-old injury-prone non-shooter Michael Carter-Williams, an unrestricted free agent, on a league minimum.

Carter-Williams, a career 40.3% shooter from the floor (and a 25.6% shooter from deep), has logged time with the Sixers, Bucks, Bulls, Hornets, Rockets and Magic in his seven NBA seasons. Slater lauds the 6’5″ guard’s size and notes that his three-point shooting has improved with Orlando, adding that he was a +27 in his time on the floor during the Magic’s three road games, all wins, before the NBA season pause on March 11. For 2019/20, Carter-Williams is shooting a below-average 29.4% from long range, which would be his career-high over a full season.

There are more updates out of California: