The NBA G League held its draft for the 2021/22 season on Saturday afternoon.

The 28 G League teams affiliated with NBA teams participated in the event, with the G League Ignite and Mexico City Capitanes sitting it out. The Ignite and Capitanes will be taking part in the NBAGL’s Showcase Cup this fall, but won’t be part of the 36-game regular season that tips off in late December.

The first player selected in today’s draft was former St. John’s point guard Shamorie Ponds, who was picked by the Delaware Blue Coats, the Sixers‘ G League affiliate. Ponds has a little NBA experience, having appeared in four games as a rookie in 2019/20 while on a two-way contract with Toronto.

Among the other notable picks were Nate Darling by the Agua Caliente Clippers of Ontario at No. 5 and LiAngelo Ball by the Greensboro Swarm at No. 14. Last week, the Clippers and Hornets signed and waived Darling and Ball, respectively, in an effort to secure their affiliate rights, but were unable to get those rights for procedural reasons. The two teams had to use the draft to make sure they landed those players.

The Knicks also signed and waived veteran guard Brandon Knight during the preseason and were unable to get his affiliate rights due to a procedural issue. However, Westchester passed on Knight with the No. 4 overall pick today, and the Heat‘s affiliate, the Sioux Falls Skyforce, snatched him up at No. 6. We’ll see if Knight is no longer in the Knicks’ plans or if the Skyforce intend to trade his rights to Westchester.

Lance Stephenson to the Grand Rapids Gold (Nuggets) at No. 13 and Dwyane Wade‘s son Zaire Wade to the Salt Lake City Stars (Jazz) at No. 10 were a couple of the other notable picks that played out as expected.

G League training camps open on Monday, with the Showcase Cup tournament tipping off on November 5.

NBA veterans Skal Labissiere and Brandon Knight are among a list of 101 players eligible for the 2021 G League Draft, which takes place tomorrow, October 23.

Marc Stein of Substack tweets that Stephenson might land with the Nuggets‘ affiliate, the Grand Rapids Gold.

Knight was signed and waived last week (Knicks), as was Darling (Clippers), so perhaps there were procedural issues with their affiliate rights, similar to what happened with the Hornets and LiAngelo Ball.

The full G League Draft order can be found here.

Njie rejected multiple offers from the EuroLeague and Liga ACB, Dianis said. The 6’3″ point guard was named Rookie of the Year in the Swedish Basketball League last season, averaging 17.8 points, 6.2 rebounds and 4.9 assists per game.

Njie, 20, will be NBA draft-eligible for 2022 and attended St. Benedict’s Preparatory school before signing overseas.

Guard Joe Young is taking a proactive approach to getting back in the league. He’ll work out for NBA teams in Houston this week, Kelly Iko of The Athletic tweets. Young, who appeared in 127 games for the Pacers from 2015-18, has been playing in China since the Pacers parted ways with him.

With the start and end dates for the 2020/21 NBA season still very much up in the air, USA Basketball managing director Jerry Colangelo is having a hard time planning for next year’s Olympics in Tokyo, as Chris Sheridan of BasketballNews.com writes. Colangelo tells Sheridan that Lakers forward LeBron James and other U.S. stars have conveyed interest in participating in those Olympics, but haven’t been able to commit to anything due to the uncertainty of the schedule.

“I was told the NBA season would start in December, and then it was Christmas, and then after January 1, and that keeps pushing the schedule for me,” Colangelo said. “The NBA season typically takes 170 or 171 days to complete, so that creates a conflict on paper.”

The Tokyo Olympics are scheduled to begin on July 23, with qualifying tournaments for the final four spots in the men’s tournament set to tip off on June 29. If the ’20/21 season runs deep into the summer again, it will compromise the availability of NBA players for Team USA and other countries, but Colangelo remains hopeful that many of those players will be able to participate.

“If the (NBA) season conflicts with the Olympics, I might have 14 non-playoff teams to choose from, but then other players will become available as the NBA playoffs progress,” Colangelo told Sheridan. “The problem is that the ICO has a rule mandating an early submission of a 12-man roster. But with a pandemic, the hope would be that you’ve got to set aside outdated rules. I assume people will be reasonable and come up with some kind of a program that works.”

Former Lakers president of basketball operations Magic Johnson expects the new LeBron James–Anthony Davis pairing to be successful, he said this week at the 2019 BET Experience Genius Talks, as relayed by Alexis Mansanarez of Sporting News.

“LeBron is still, you know, the best in basketball,” Johnson said. “And I think that when you put another superstar with him, an Anthony Davis, both of them will allow each other now to really play their game and dominate, because what happens, the floor will open up.

“And LeBron is such an incredible passer and driver, and he always makes his teammate better. So look for Anthony really to have probably one of his greatest seasons.”

Johnson resigned from his position toward the end of the 2018/19 season, but remains a strong supporter of the team he spent his entire playing career with.

Los Angeles traded away a major haul to acquire Davis from New Orleans: Lonzo Ball, Brandon Ingram, Josh Hart and three first-round picks. With general manager Rob Pelinka taking over the day-to-day duties in Johnson’s absence, the team must now work to effectively fill the holes around Davis and James entering the 2019/20 season.

Here are some other notes out of Los Angeles tonight:

Former Pacers guard Joe Young is expected to make the move overseas to China for the 2018/19 season, per Emiliano Carchia of Sportando. Carchia reports that Young has agreed to terms with Chinese team Nanjing Monkey King.

The Pacers declined Young’s team option for the 2018/19 season back in June, making him an unrestricted free agent. That was the last we’d heard on Young until now — if any NBA teams had interest in him over the last month, that interest wasn’t reported, so it makes sense that he’d explore international opportunities.

Assuming he makes his deal with Nanjing official, Young will become the latest in a string of NBA players to spend time with the club. Hassan Whiteside is the most noteworthy former member of the squad, which has also featured J.J. Hickson, Jared Cunningham, DeJuan Blair, and Von Wafer in recent years.

The Pacers have decided not to exercise Joe Young‘s option for the 2018/19 season, reports ESPN’s Adrian Wojnarowski (via Twitter). The move ensures that Young will become a free agent on July 1.

Indiana could technically still issue a qualifying offer to Young to make him a restricted free agent, but that seems unlikely. Assuming today’s deadline passes with no qualifying offer from the Pacers, the 26-year-old will be unrestricted on Sunday.

The Pacers are one of the only NBA playoff teams projected to have cap room this offseason. Having been linked to a handful of free agent targets, Indiana will now have a little more flexibility to make offers with Young off the books for 2018/19.

The Pacers are in an enviable position mere months after it seemed like they were doomed to a long and challenging rebuild. The breakout seasons enjoyed by Victor Oladipo and Domantas Sabonis have helped distract from the absence of Paul George while the all-around contributions of an unheralded, cohesive veteran lineup has put Indiana firmly in the Eastern Conference playoff picture.

The Pacers didn’t make a major splash at the trade deadline and were even asked specifically by players to avoid tinkering with the chemistry in the locker room. While it’s hard to argue that the franchise made the wrong call standing pat with a roster that’s punched above its weight on a nightly basis, the Pacers have a long road ahead of them before they’re considered serious challengers, even in the East.

It’s refreshing to see a team build anew without bottoming out. Solid drafting and some responsible payroll management will help them climb to the next rung on the ladder. 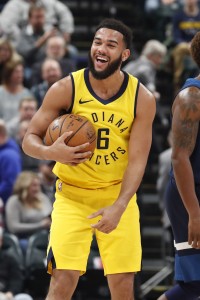 Cory Joseph, PG, 26 (Up) – Signed to a four-year, $29.9MM contract in 2017
Joseph has thrived as the younger half of a point guard tandem charged with the task of helping the Pacers play a faster style of basketball. While he’s ceded the majority of the starts so far this season to Darren Collison, Joseph is a solid rotation piece and possible future starter. It’s likely we’ve already caught a glimpse of his ceiling, so the former Raptors probably won’t draw major money on the open market. That being said, it’s hard to imagine he couldn’t procure a raise if he turns down his 2018/19 player option worth just less than $8MM.

Glenn Robinson III, SF, 24 (Up) – Signed to a three-year, $3.4MM contract in 2015
After breaking into Indy’s rotation in 2016/17, an ankle injury put Robinson III’s latest campaign on hold until after the All-Star Game. The Pacers may see some upside in the former second-round pick, and likely won’t have to outbid many competitors to retain his services should they wish to do so. Assuming the swingman’s health holds up in the final stretch of 2017/18, expect the club to lock him in for at least a few more seasons at an affordable rate. At this stage in the game, the Pacers can justify the low-risk, medium-reward lottery ticket.

Lance Stephenson, SG, 27 (Up) – Signed to a three-year, $12.6MM deal in 2017
While Stephenson’s career took a turn for the worse after he flew the coop in 2014, his return to Indiana has helped restore his value as a professional basketball player. The 27-year-old may not be the irreplaceable triple-double machine the Hornets hoped he would be when they poached him from Indiana four years ago, but he’s a solid rotation piece whose contributions to the Pacers franchise are both mysterious and intangible. Expect the club to bring their enigmatic swingman back on his dirt-cheap $4.4MM team option.

Joe Young, PG, 26 (Down) – Signed to a four-year, $5.1MM deal in 2015
The Pacers have never seemed particularly intent on working Young into their rotation. While you could argue that a consistently competitive squad like Indiana may be inherently reluctant to throw big minutes at an inexperienced point guard, he only topped the 20-minute plateau four times during his first two years in the league. The 25-year-old has seen an uptick in usage since Collison went down with a knee injury in early February, but the club may be better off turning down his team option and seeing what else they could do with the roster spot.

Thaddeus Young, PF, 30 (Down) – Signed to a four-year, $53.9MM deal in 2015
Young has established himself as a critical component of this Pacers team and fills the role of do-everything veteran forward admirably. While the almost-30-year-old’s services would be welcomed by several other contending teams, it’s hard to imagine Young’s camp being all that confident they’d land more than $13.8MM in a bear market. If Indiana was knee deep in the turbulent rebuild many expected, it would make sense for Young to take that chance, but given that the opposite is true, I anticipate him accepting the 2018/19 player option and returning as a leader on and off the court.