Malachi Richardson has signed with Poland’s Tauron GTK Gliwice, according to Sportando. Richardson was the 22nd overall pick of the 2016 draft. He also played in Poland last season with King Wilki Morskie Szczecin. Richardson hasn’t played in the NBA since the 2018/19 season.

In his early look at 2022’s top free agents, John Hollinger of The Athletic ranks Bulls guard Zach LaVine as the No. 1 player in next year’s class, ahead of stars like Wizards guard Bradley Beal and Nets guard James Harden. As Hollinger explains, LaVine will be just 27 years old when he reaches free agency, which means his next contract is a good bet to cover his prime years. Beal will be 29 and Harden will be entering his age-33 season, so the final seasons of long-term deals would be a little riskier in those cases — especially for Harden.

A number of former NBA players are set to take part in 2020’s edition of The Basketball Tournament, an annual, winner-take-all tournament with a prize of $1MM.

As Carmine Carcieri of ESPN details, veteran guard Joe Johnson is playing in The Basketball Tournament after winning a championship and an MVP award in the BIG3 in 2019. Malachi Richardson, Tony Wroten, Johnny O’Bryant, and Markel Brown are among the others with NBA experience who will suit up for the event, per Carcieri.

With most professional sports still on hiatus, The Basketball Tournament should be under a larger spotlight in 2020. ESPN announced its broadcast schedule for the event today, starting with four games on July 4 and culminating in a July 14 championship.

DECEMBER 14: Former Raptors and Kings guard Malachi Richardson has left his Israeli team and is close to signing with Vanoli Cremona in the Italian league, Emiliano Carchia of Sportando reports.

Richardson was averaging 11.2 PPG with Hapoel Holon before he departed the Middle East. Vanoli Cremona is part of the LBA, Italy’s top league. He’s expected to replace an injured player on the Italian club’s roster.

Richardson signed with Hapoel Holon in August. The former Syracuse standout appeared in 22 games with Toronto last season before he was traded to the Sixers in February, who subsequently waived him. He signed a G League contract with the Canton Charge, the Cavs’ affiliate, in March.

Trey Burke may have just a partially guaranteed training camp contract with the Sixers, but he’s overflowing with confidence that he can win a roster spot, relays Marc Narducci of The Philadelphia Inquirer. The 26-year-old guard is expected to battle fellow free agent addition Raul Neto for playing time behind Ben Simmons and possibly a place on the team. However, Burke envisions a much larger role for himself.

“I think throughout stretches of the game we (Burke and Simmons) can play together and I can be out there with the starting lineup at times,” he told reporters. “That is the competitor in Trey Burke. That is who I am and what I bring to Philadelphia.”

Burke – whose minimum-salary contract reportedly has a $405K partial guarantee – hasn’t enjoyed a consistent role like that since his second season in the league. He was been with four teams in the past four years, splitting last season between the Knicks and Mavericks.

Celtics guard Marcus Smart has been cleared to return to action with Team USA, tweets Marc Stein of The New York Post. Smart has been sidelined for more than a week with a calf injury, and getting him back will help offset the unexpected loss of De’Aaron Fox, who withdrew from the team today.

Smart expressed confidence that he was close to playing again in an interview with Jared Greenberg of NBA TV during Friday’s exhibition game with Spain (video link). “Like I said, the calf is feeling amazing,” Smart said. “And, right now, we’re just taking it slow and making sure I’m a hundred percent and (then) get back out there.”

Smart appears to be in great position to earn a roster spot after the departures of Fox and fellow point guard Kyle Lowry in the past week. Team USA has 13 players left on its training camp roster, with just one cut to make before the FIBA World Cup begins.

The Knicks apparently won’t have to worry about Zion Williamson demanding a trade if they win the lottery. Williamson said on Friday that he would “love to play” for the Knicks if they drafted him, Adam Zagoria of the New York Times tweets. The Duke freshman made the remark during a Final Four press conference while accepting the Oscar Robertson (Player of the Year) Award. He went on to say he’d be happy to go wherever he was drafted.

Between the day that the Cavaliers beat the Warriors to win the 2016 NBA Finals and the day Kevin Durant opted to sign with Golden State, Cleveland’s then-GM David Griffin gathered his staff and instructed them to look into possible paths to landing Durant, writes ESPN’s Zach Lowe. As Lowe explains, there was a fear after the Finals that KD would head to the Dubs, and even though the Cavs recognized they had little chance of securing a meeting with him, they wanted to do all they could to explore the possibility.

“I don’t believe you can dream big enough in the NBA,” Griffin told Lowe recently, looking back on that 2016 offseason. “You have to go through the exercise.”

Of course, Durant ultimately signed with the Warriors and the Cavaliers didn’t get a meeting. That second part, at least, came as no surprise, since Cleveland was one of just three clubs during the summer of 2016 that ended up staying over the salary cap despite a huge cap spike that created room for 27 other teams. It would have been extremely difficult for the Cavs to create space to sign Durant, and a sign-and-trade with Oklahoma City would have been a long shot, even if the star forward had considered Cleveland.

It’s hard to even view the Cavs’ failed run at Durant an intriguing what-if scenario, since it never got off the ground at all. Still, it’s a reminder that even the league’s most successful teams will do their due diligence to find ways they can add another star and become even more dangerous — even if the road to an acquisition seems improbable.

Here’s more from out of Cleveland:

The 76ers also confirmed the release of Richardson, who was acquired in a separate deal with Toronto this week.

11:45am: The Sixers will waive Richardson to open up room for Ennis, tweets Derek Bodner of The Athletic.

11:11am: The Rockets and Sixers have reached an agreement on a trade that will send James Ennis to Philadelphia, reports Shams Charania of The Athletic (via Twitter). According to Charania, Houston will receive the right to swap 2021 second-round picks with the 76ers (Twitter link). 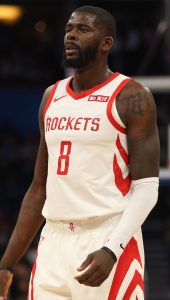 The Rockets signed Ennis to a two-year, minimum salary contract during the 2018 offseason in the hopes that he could help fill the void on the wing created when the team lost Trevor Ariza and Luc Mbah a Moute in free agency.

The 28-year-old Ennis battled some injuries during his time with the Rockets, but was a solid contributor in the 39 games he played. In 23.6 minutes per contest, he averaged 7.4 PPG on .500/.373/.714 shooting. However, with Iman Shumpert set to arrive in Houston as a result of a three-team trade with Sacramento and Cleveland, it appears the Rockets are willing to move on from Ennis.

The Sixers, meanwhile, will add a solid bench piece at a low cost after sacrificing some depth in their acquisition of Jimmy Butler earlier in the season. It’s unclear how much playing time Ennis will get in Philadelphia, but I’d expect him to see minutes for the second unit in a three-and-D role.

The 76ers will be able to add Ennis to their roster without sending out any salary, since he’s on a minimum deal, though they’ll need to make a corresponding move to open up a roster spot. Malachi Richardson and Justin Patton look like the most expendable pieces on the roster.

As for the Rockets, they started the week at 14 players and had been poised to take on an extra man in their deal with the Kings and Cavs. Moving Ennis will get them back to 14 and will slightly reduce their projected luxury tax bill. They’ll also create a modest trade exception worth Ennis’ salary ($1,621,415).

The exact details on the pick swap rights aren’t yet known — the Rockets may simply get the chance to swap out their pick for the Sixers’ selection during the 2021 second round, but Philadelphia also holds ’21 second-rounders from Denver and New York, so it could be more complicated than that.

2:03pm: The trade is official, the Sixers and Raptors have confirmed in press releases.

1:43pm: A pair of Atlantic Division rivals have agreed to a trade one day after playing each other, reports Keith Pompey of The Philadelphia Inquirer (Twitter link). According to Pompey, the Sixers are acquiring shooting guard Malachi Richardson from the Raptors, along with a 2022 second-round pick and the draft rights to Emir Preldzic. Toronto will receive cash considerations in return.

Richardson, 23, was acquired by the Raptors at last season’s trade deadline in exchange for Bruno Caboclo in a cost-cutting move, and this deal appears financially motivated as well. Toronto is over the luxury tax threshold for 2018/19, and will reduce its projected end-of-season tax bill by moving off Richardson’s $1,569,360 salary.

In parts of two seasons with the Raptors, Richardson appeared in just 23 games (4.7 MPG), averaging 1.4 PPG and 0.6 RPG in his very limited role. After trading him away, Toronto will have just 13 players on its 15-man roster and will have two weeks to get back up to the league-mandated minimum of 14 players.

The Raptors could make another trade before Monday’s deadline to add a 14th player, or could explore the buyout market later in the month for a veteran. Signing a player to a 10-day contract would also be an option, albeit just a temporary one — the club would have to get back up to 14 players again at some point once a 10-day deal expires.

As for the Sixers, they still have an open roster spot after letting Corey Brewer‘s second 10-day contract expire this week, so they won’t have to make a corresponding move to make room for Richardson. It’s not clear if the club envisions the former Syracuse standout filling that 15th roster spot for the rest of the season or if he’ll be waived at some point.

Preldzic, the 57th overall pick in the 2009 draft, appears unlikely to ever make the leap to the NBA at this point, so if the 76ers don’t have plans for Richardson, it looks like the 2022 draft pick will be the “prize” of this minor deal for Philadelphia.