Former NBA swingman Anthony Brown and Serbian team KK Partizan Belgrade have officially parted ways, as Emiliano Carchia of Sportando relays. Brown’s deal was supposed to run through June, but the two sides agreed to terminate it just a month after it was finalized.

In other international basketball news, former Spurs second-round pick Olivier Hanlan has signed with German club Telekom Baskets Bonn, according to an announcement from the team (hat tip to Sportando). Hanlan signed with San Antonio in September, but was waived a few days later, so the Spurs no longer have his NBA rights.

The Spurs have waived guard Olivier Hanlan, according to the NBA.com transactions log.

San Antonio has added guard Nick Johnson to the training camp roster, according to a team release. Johnson was named the G League finals MVP last season after leading Austin to the title.

Houston selected him in the second round in 2014. He averaged 2.6 PPG in 9.4 MPG. Johnson has appeared in a total of 102 G League games and spent the 2o16/17 season with Bayern Munich in Germany.

The Spurs technically have a full camp roster, though recently-retired Manu Ginobili is still on the 20-player list.

Hanlan, a former Boston College standout, was selected in the second round by the Jazz in 2015. The Spurs acquired his rights the following summer in exchange for Boris Diaw and a future second-rounder.

The Spurs have made another addition to their training camp roster, according to ESPN’s Michael C. Wright, who tweets that veteran forward Okaro White has signed an Exhibit 10 contract with San Antonio. Per RealGM’s transactions log, the Spurs have also officially completed reported deals with Drew Eubanks, Olivier Hanlan, and Jaron Blossomgame.

White, who signed a two-year contract with the Cavaliers during the final week of the 2017/18 season, was waived by Cleveland in August before the team owed any guaranteed money for that second year. Formerly a member of the Heat, White has appeared in 41 NBA games over the last two seasons for Miami, averaging 2.9 PPG and 2.3 RPG in 13.4 minutes per contest.

The Florida State alum, who missed a good chunk of the ’17/18 campaign with a broken foot, talked earlier this year about how he’s still working to mentally get over that injury. It appears he’ll have the opportunity to work on it this fall with San Antonio.

The Spurs now have a full 20-man roster, with 15 players on fully guaranteed salaries, four on non-guaranteed deals, and one (Eubanks) on a two-way pact. However, one of those 15 guaranteed contracts is Manu Ginobili‘s — the club will still need to officially release him at some point after he announced his retirement.

The Spurs will sign guard Olivier Hanlan, Michael Scotto of The Athletic tweets.

It’s apparently a training camp deal, as San Antonio has 14 players with guaranteed contracts and another on a partially-guaranteed deal. They recently invited former Thunder swingman Josh Huestis to camp and signed Amida Brimah and Julian Washburn to Exhibit 10 deals.

The former Boston College standout was selected in the second round by the Jazz in 2015. The Spurs acquired his rights the following summer in exchange for Boris Diaw and a future second-rounder.

Canada Basketball has announced its preliminary 18-man roster of players who have been invited to participate in training camp and exhibition play ahead of the FIBA Basketball World Cup 2019 Americas Qualifiers next month, reports Josh Lewenberg of The Sports Network.

As also highlighted by Lewenberg, notable absences include Trey Lyles (Nuggets), Nik Stauskas (Nets), and most glaringly, Andrew Wiggins (Timberwolves). Per Lewenberg, multiple sources indicated that one factor in Wiggins’ decision to decline Canada Basketball’s invitation is his strained relationship with national team head coach Jay Triano, who left Wiggins on the bench during the final moments of a qualifying game for the 2016 Summer Olympics in Rio de Janeiro.

Chandler Parsons‘ stint with the Grizzlies has not gone according to plan. The former Rockets and Mavericks standout has been hampered by knee injuries, including three knee surgeries the last three years. Now, after playing just 15 minutes in Memphis’ first few regular season games this year, Parsons is frustrated with his limited playing time, Ronald Tillery of the Commercial Appeal writes.

“It sucks right now playing 15 minutes a night to be honest with you,” Parsons said. “But they have a plan in place that, hopefully, I’ll be playing big minutes when it matters.”

Parsons appeared in just 34 games last season, averaging 6.2 PPG and 2.5 RPG in a career-low 19.9 minutes per game. After signing a four-year, $94MM deal with the Grizzlies in July 2016, Parsons has not come close to his past performance. If he continues to show he’s over his prior knee injuries, the Grizzlies will look salvage the remainder of their pact with the 28-year-old.

Check out more news coming out of the Southwest Division:

FRIDAY, 12:38pm: Diaw is officially a member of the Jazz, according to the team, which issued a press release to announce its trade with the Spurs. Utah acquires Diaw, a 2022 second-round pick, and cash considerations for the rights to Hanlan.

TUESDAY, 3:49pm: The Spurs and the Jazz have reached an agreement on a trade that will send Boris Diaw to Utah, reports Adrian Wojnarowski of The Vertical (via Twitter). San Antonio had been working to trade Diaw in a deal that cleared cap room for Pau Gasol, so the Jazz won’t be sending out any salary in the swap. Instead, as Wojnarowski tweets, the Spurs will get the rights to 2015 second-round pick Olivier Hanlan, who spent last season playing overseas. 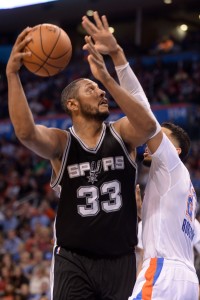 In Utah, Diaw will be joining an increasingly intriguing roster that will include offseason additions George Hill and Joe Johnson. Utah already has a solid young foundation in place, with Gordon Hayward, Derrick Favors, Rudy Gobert, Dante Exum, and Rodney Hood among the club’s players under contract. The Jazz have supplemented those core pieces this offseason with some solid veteran acquisitions, and should easily be in playoff contention next season.

The Jazz should have the cap room necessary to absorb Diaw’s $7MM salary without making any other notable moves, while for the Spurs, clearing that figure from their cap will allow the team to finalize its agreement with Gasol. San Antonio could have waived Diaw last week and saved $4MM in cap room, since his $7MM salary was only guaranteed for $3MM at that point. However, the Spurs opted to keep him, and were able to clear his entire salary while adding Hanlan to their lengthy list of draft-and-stash players.

Olivier Hanlan, the No. 42 overall pick in this year’s NBA Draft by the Jazz, has signed a deal with the Lithuanian club Zalgiris Kaunas, the team announced (translation by Emiliano Carchia of Sportando). The pact is for two years and includes an option for the second season, though it is unclear if that is a team or player option.

If the Jazz are to retain Hanlan’s NBA rights, the team will need to extend him at least a one-year, non-guaranteed contract offer. Hanlan is not required to sign the agreement for Utah to hold onto the point guard’s rights, and he would become a draft-and-stash player as a result.

The Nuggets are “firmly behind” point guard Ty Lawson despite his ongoing struggles with alcohol and problems with the law, writes Christopher Dempsey of The Denver Post. Denver GM Tim Connelly issued a statement of support after Lawson was sentenced Friday to alcohol rehab by a Denver judge on a DUI charge. “When one of our guys goes through some issues we support him as a family, and we’re going to stand behind him,” Connelly said. “I don’t want to comment too much on what’s going on in his personal life, but when any of our guys has an issue we all have an issue. And we want to stand firmly behind him.” It was reported earlier this week that the Rockets, Pistons and Lakers have expressed interest in acquiring Lawson.

June 22nd, 2015 at 11:44pm CST by Dana Gauruder
The Thunder have been shopping Perry Jones, Jeremy Lamb and Steve Novak, Chris Mannix of Sports Illustrated tweets. Oklahoma City, which has $78.26MM in guaranteed salary commitments for next season, is seeking financial relief but it is also seeking a draft pick, Mannix adds. The Thunder already have picks at No. 14 and No. 48.
In other news around the league:
Retweet 10 Share 4 Send via email0
Load More Posts
Top Stories
Recent Posts