Grant Hill has taken over as USA Basketball’s managing director and one of his first tasks is to find a replacement for coach Gregg Popovich. Hill told The Undefeated’s Marc Spears that he plans to hire a new coach before the NBA season begins on October 19.

Candidates that have previous experience with USA Basketball will have the upper hand, according to Spears. That group would include Steve Kerr, Lloyd Pierce, Jay Wright, Doc Rivers, Nate McMillan, Monty Williams, Tom Thibodeau, Erik Spoelstra and Jeff Van Gundy.

OCTOBER 10: Real Madrid has formally announced that Mejri will join the club until the end of the 2019/20 season.

Mejri had inked a temporary contract with Liaoning of the Chinese Basketball Association in September to replace the injured Brandon Bass, per the report. However, Mejri had been seeking another opportunity in the NBA or a chance to play in Europe. Mejri is currently in Dallas awaiting the completion of his Real Madrid deal, the report notes.

Mejri suited up for Tunisia during the FIBA World Cup in China where he averaged 16.2 PPG and 10.2 RPG. He has previously played for Real Madrid in 2013 and 2015.

Salah Mejri To Play In China?

2:16pm: Mejri tells Carchia that he hasn’t signed a contract with Liaoning, though the team has announced that he met with the coach today and will start practicing with the club tomorrow (Twitter link). Mejri has been invited by Liaoning to take part in the East Asia Superleague tournament, which begins on September 17, Carchia notes.

11:20am: Former Mavericks center Salah Mejri has signed a contract to play with Liaoning of the Chinese Basketball Association, reports Emiliano Carchia of Sportando. According to Carchia, it’ll just be a one-month deal, with Mejri temporarily replacing Brandon Bass on the roster.

When Mejri reached unrestricted free agency this summer, the Mavs went in another direction, signing veteran center Boban Marjanovic to fill the role that Mejri has played over the last few years.

Although Tunisia didn’t advance beyond the first round in the 2019 FIBA World Cup, Mejri had a big tournament, averaging 16.2 PPG and 10.2 RPG in five games. He has also been the World Cup’s leading shot blocker, with 3.2 BPG. In Tunisia’s final classification-round game against Angola on Sunday, he blocked eight shots, tying Yao Ming‘s World Cup record.

While he’s off the free agent market for now, Mejri could still be a factor in the NBA this season, given the short-term nature of his new deal in China.

Mejri is the second NBA player to sign with Liaoning this offseason, joining Lance Stephenson.

Despite some buzz on social media that Kawhi Leonard is leaning toward the Lakers, the reigning Finals MVP hasn’t reached a decision, tweets Cris Carter of Fox Sports 1. Carter – who has been an unexpectedly plugged-in source on Leonard since the forward’s days in San Antonio – adds that anyone thinking the Lakers have an edge on the Clippers or Raptors would be “wrong.”

Leonard is the last big star available in free agency, and his decision will have a long-lasting impact on all three franchises. Whichever club lands him will be a contender for the NBA title, while the other two teams will be scrambling to fill out their rosters. Leonard still hasn’t given any indication of when he plans to announce his choice.

Here are some more notes on the third day of free agency:

Salah Mejri has re-signed with the Mavericks, tweets Tim MacMahon of ESPN. Mejri was waived Thursday to open a roster spot so the team could complete a deal that sent Harrison Barnes to the Kings. He cleared waivers Saturday.

Zach Randolph, who was acquired from Sacramento along with Justin Jackson, was waived Friday, creating an opening to bring back Mejri. Randolph hasn’t taken the court yet this season.

Mejri is in his fourth season with Dallas, but hasn’t seen much action this year. He has appeared in just 16 games, averaging 3.2 points and 3.9 rebounds in 11.6 minutes per night.

The 32-year-old center played briefly with Luka Doncic in Real Madrid during the 2015/16 season and is friends with the rookie standout, notes Selby Lopez of The Dallas Morning News. Doncic posted a farewell message to Mejri on Instagram and another objecting to the flurry of trades the team made in the week leading up to the deadline, so Lopez suggests that Mejri was re-signed in part to help keep Doncic happy.

FEBRUARY 7, 12:43am: The trade is now official, according to a press release from the Mavericks. The club confirmed it has released Mejri, who will become a free agent if he clears waivers.

As Bobby Marks of ESPN notes (via Twitter), assuming Dallas uses its recently-created Wesley Matthews traded player exception to absorb Randolph’s salary, the team should generate a new TPE worth $21,299,378. It would be the largest trade exception in NBA history. 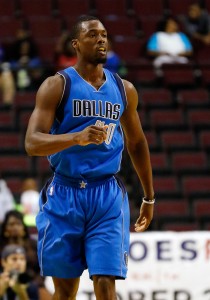 FEBRUARY 7, 12:13am: Because they’re acquiring two players in exchange for one, the Mavericks will need to waive a player to finalize the trade. That player will be Salah Mejri, according to Mike Fisher of DallasBasketball.com (Twitter link). Mejri was informed of the decision during Wednesday’s game vs. Charlotte, per JD Shaw of Hoops Rumors (Twitter link).

FEBRUARY 6, 9:18pm: The Mavericks are finalizing a trade that will send Harrison Barnes to Sacramento, tweets Shams Charania of The Athletic. Justin Jackson and Zach Randolph will be heading to Dallas, according to ESPN’s Adrian Wojnarowski (Twitter link). There are no picks involved in the deal, confirms Sam Amick of USA Today (Twitter link).

The Kings are hoping for a long-term arrangement with Barnes, who has a $25.1MM player option for next season, Woj adds (Twitter link). He has been a consistent scorer during his two and a half years in Dallas, peaking at 19.2 PPG in 2016/17. He is averaging 17.8 points and 4.3 rebounds in 48 games this season.

Sacramento, which is the only team with remaining cap space, will use $10.5MM to complete the trade, posts Bobby Marks on ESPN Now. Barnes has an 8% trade bonus that comes to $686,443 if the deal is finalized tomorrow. The Kings will have $21MM in cap room this summer if Barnes opts in or $45.2MM if he doesn’t. Today’s trades will leave Sacramento with an open roster spot.

The Kings appear serious about making a run at a playoff spot, which seems more available after the Clippers traded Tobias Harris early this morning. Sacramento started the day in ninth place at 28-25, just one game behind L.A.

The trade leaves Dallas close to being able to offer a maximum contract in free agency this summer, tweets ESPN’s Zach Lowe. Jackson will make $3.28MM next season and Randolph has an $11.7MM expiring contract. Lowe states that the position of the Mavericks’ 2019 first-round pick could determine whether they can reach a full max deal. Dallas won’t have that pick – or the associated cap hold – unless it lands in the top five.

As part of an ongoing series in anticipation of Mavericks training camp starting later this month, Eddie Sefko of The Dallas Morning News asks whether newly-acquired All-Star big man DeAndre Jordan is on the downslope of his career.

Now a 10-year veteran, Jordan actually averaged 12.0 points and a career-best 15.2 rebounds per game last season for the Clippers, but the team did not perform well, finishing 10th in the always tough Western Conference. Moreover, Jordan’s field goal percentage of .645, while still excellent, was his lowest output since the the 2012/13 season.

While it remains to be seen if Jordan’s game is on the decline, the Mavericks at least somewhat hedged their bet by only signing Jordan to a one-year contract for the 2018/19 season, which will allow the club opportunity to see how Jordan meshes with relative youngsters Dennis Smith Jr., Luka Doncic and Harrison Barnes.

If Jordan ends up descending into the twilight of his career, the Mavs can simply let him go next summer. But if he can continue to average a double-double and be near the top of the NBA in rebounds and field goal percentage again this season, Sefko opines that the Mavericks will gladly re-sign Jordan next summer at whatever price tag is needed.

Suns forward Ryan Anderson lowered his guaranteed salary to $15.4MM for the final year of his contract in 2019/2020 but it can be traded for the prior fully guaranteed value of $21.4MM, Tim Bontemps of the Washington Post tweets. Anderson agreed to the reduction to facilitate the trade from the Rockets. However, since his contract was signed under the previous CBA, its trade value remains unchanged. The Suns will have until July 10, 2019 to decide whether they want to guarantee Anderson’s full salary for the final year of his contract or waive him, in which case they’d still have to pay the reduced guarantee.

In other news from around the Western Conference:

As previously noted, Capela’s $90MM is technically guaranteed for $80MM with $10MM in incentives. He’ll receive $1MM annually if he plays 2,000 minutes or if the Rockets make the Western Conference Finals. He also has a $500K annual incentive for reaching 2,000 minutes played and a defensive rebound percent greater than 30 percent. Pincus considers those incentives well within reach. As a point of reference, Capela logged 2,034 minutes in 74 regular-season games last season with a defensive rebounding percentage of 30.8.

He also has a $500K annual incentive for taking at least 150 free throws and making 65% or more, which Pincus considers unlikely. Capela shot a career-high 56% from the line last season.

AUGUST 3: Having used up all their cap room, the Mavericks have finally gone ahead and finalized their new one-year, minimum-salary contract with Mejri, according to a press release.

Mejri will have the ability to veto trades during the 2018/19 league year.

JULY 1: The Mavericks have reached an agreement to re-sign Salah Mejri, with the big man’s agency breaking word of his new deal (Twitter link). League sources tell Marc Stein of The New York Times (Twitter link) that it’ll be a one-year, minimum-salary contract for Mejri.

Mejri was eligible for restricted free agency this summer and initially received a qualifying offer from the Mavericks, but the team quickly withdrew that offer in order to maximize its cap flexibility.

Now that he has agreed to terms on a one-year deal with the Mavs, Mejri is unlikely to finalize his agreement until after the team uses all its cap room. At that point, Dallas can use the minimum salary exception to lock up Mejri, with no cap space required. He’d be in line for a $1,567,007 salary.