The Trail Blazers have been going through tough times both on and off the court, but coach Chauncey Billups insists the investigation into – and subsequent firing of – general manager and president of basketball operations Neil Olshey hasn’t been a distraction, writes Aaron Fentress of The Oregonian. Speaking to reporters before Saturday’s game, Billups said he and the players have been focusing on their own jobs rather than what’s happening with management.

“I kind of just stick to the task at hand,” he said. “I’ve got a locker room in there of guys that I had to try to lead, do the best job that I can and keep them focused on the task as well. … I don’t think the situation with Neil was a distraction at all. Not even a little bit. Obviously, I’ve got my finger on it. Never hear guys talking about it. Discussing it. I don’t think it was a distraction. No.”

Since Billups was hired in June, Portland has replaced franchise president and CEO Chris McGowan and is now in the market for a new GM. Billups admitted the upheaval can be challenging, even though the move with Olshey was expected.

“Naturally, with the investigation going on, people were kind of anticipating what might happen,” he said. “But it finally came down. It’s tough because I just felt like this organization is going through so much change.”

In a fascinating piece released mere minutes before former president and general manager Neil Olshey was fired by the Trail Blazers, Jason Quick of The Athletic details how he views head coach Chauncey Billups as a poor schematic fit with Portland’s flawed roster — constructed by Olshey.

Even before star Damian Lillard was announced as being injured, it was clear that Portland was not functioning as a cohesive unit. Quite the opposite, in fact. Quick writes that the team had grown accustomed to ex-coach Terry Stotts‘ freedom on both ends of the court, and Billups wants to instill more structure and accountability, with a more aggressive defense and more ball movement on offense.

However, Billups’ stern exchanges have seemingly demoralized the group, and Quick asked Billups how he thought it was going over with the players.

“I think pretty good, but at the end of the day, it’s not easy,” Billups said. “It’s not easy all the time to hear when you are not doing what you are supposed to do, especially from the coach. All I care about is I believe we should play one way. I know what wins, I know what’s important. When we don’t do it, obviously I’m going to always bring it to the table, to those players, to those people. And I know it’s not always going to be well received.

“But I know it’s the best thing for the team, it’s the best thing for the player and at the end of the day, if you are mad or upset, if you actually really want to win and be a good teammate, you go home and think about that, look yourself in the mirror, and you are going to realize what I was saying was right, you know? With no agenda at all other than for us to try and get better. So, I can ride with that. That’s just kind of who I was as a player, who I am as a person, and I will be consistent there.”

Quick believes that while it is a talented group of players, the roster that Olshey built doesn’t make sense under Billups. He mentions the fact that the Blazers have three 6’3″ guards (Lillard, CJ McCollum, and Norman Powell) all starting, which leads to them being exploited defensively. Quick also says that Olshey’s infatuation with McCollum and refusal to trade him hurt the team. He thinks a roster shakeup is absolutely necessary in order to break the team out of its early season funk. The Blazers are currently 11-12.

It’s a great article from Quick and worth reading in full for subscribers of The Athletic. 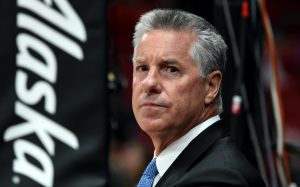 Rockets coach Stephen Silas didn’t attend Friday’s introductory news conference for the team’s draft picks because he’s been placed under the NBA’s health and safety protocols, Jonathan Feigen of the Houston Chronicle reports. Silas has “very minor” coronavirus symptoms and is fully vaccinated. He was involved in the team’s draft preparations, including the workout of Jalen Green, whom the Rockets chose with the No. 2 pick.

Now that the Bulls have been officially excluded from the NBA’s 22-team resumption, the team will naturally turn their attention to an exciting offseason, per KC Johnson of NBC Sports Chicago. This will mark Chicago’s first offseason with Arturas Karnisovas and Marc Eversley at the helm of the team’s front office. Karnisovas and Bulls president and COO Michael Reinsdorf both released official statements expressing disappointment at not getting to partake in the conclusion of the season from a player development perspective.

The status of head coach Jim Boylen, despite support from ownership and former president of operations John Paxson, remains the biggest question mark. Boylen owns a 39-84 record as head coach. Otto Porter Jr., the team’s injury-prone highest-paid player, is expected to opt in to the final season of his four-year, $106.5MM contract.

As the Pistons get their search for a general manager underway, Eric Woodyard of ESPN (Twitter link) hears from multiple sources that the team hasn’t requested to interview Tayshaun Prince. Currently the VP of basketball affairs for the Grizzlies, Prince was part of Detroit’s 2004 championship team and there was speculation he’d be a GM candidate, but he wasn’t on the team’s initial interview list, according to Woodyard.

As for candidates who might actually be on the Pistons’ list, sources tell Stefan Bondy of The New York Daily News (Twitter link) that former Phoenix GM Ryan McDonough, former Atlanta GM Wes Wilcox, and current Clippers assistant GM Mark Hughes are among those receiving some consideration. However, Bondy cautions that the search will likely be “extensive,” so that list is far from exhaustive.

The Cavaliers have Israeli forward Deni Avdija ranked in their second tier of draft prospects, according to Chris Fedor of Cleveland.com. Fedor states that the team has done “extensive homework” on Avdija, but evaluation is tricky because he had limited playing time in the EuroLeague.

At 6’9″, Avdija offers athleticism, versatility and play-making, but his outside shot is questionable. Forward is Cleveland’s primary position of need, but Fedor indicates the team plans to take the best player available, regardless of position. He identifies Anthony Edwards, James Wiseman and LaMelo Ball as the three players in the team’s first tier.

Fedor also says if the Cavs are interested in Obi Toppin, they should plan to use him as a power forward/center rather than a small forward. According to Fedor, Toppin doesn’t have the offensive skills or the lateral quickness to succeed on the perimeter in the NBA.

The Pistons will focus on external candidates in their search for a new general manager, according to James L. Edwards III of The Athletic. The new GM will work alongside senior advisor Ed Stefanski to chart a course for the future of the franchise, while Malik Rose and Pat Garrity will be retained as assistant GMs.

Rockets point guard Chris Paul was fined $35K for “aggressively confronting and recklessly making contact with a game official” but was not suspended, according to a league press release relayed by ESPN’s Tim MacMahon.

Paul was ejected with 4.4 seconds left in Game 1 of the Rockets’ conference semifinal series with Golden State on Sunday. He was whistled for his second technical foul when he made contact with referee Josh Tiven while arguing that Warriors guard Klay Thompson committed a loose-ball foul against him. The non-call on Thompson was correct, according to the NBA’s last two minute report, MacMahon notes. Paul said the contact was accidental.

As part of their continued effort to revamp their front office, the Grizzlies have promoted Tayshaun Prince to Vice President of Basketball Affairs within the franchise’s basketball operations department, according to an official release from the team.

In his new/enhanced role, Prince will “facilitate alignment between the front office, coaching staff and locker room and participate in the evaluation of professional, college and G League personnel.” So, it sounds like he’ll have several roles, both in scouting and in acting as a bridge between the players and front office on a day-to-day basis.

“We are excited to establish Tayshaun as a core member of our front office,” Executive Vice President of Basketball Operations Zach Kleiman said. “His knowledge of the game is exceptional and we are thrilled he will continue providing valuable contributions to the organization on a day-to-day basis.”

As we’ve noted before, the Grizzlies have been searching for some more experienced basketball executives to join the front office ever since re-assigning Chris Wallace and promoting Kleiman, and this latest move certainly fits that narrative.

Prince, who joined the Grizzlies’ front office in 2017 as Special Advisor to Wallace, also played for the Grizzlies for three seasons, from 2013 to 2015. He helped Memphis reach the Western Conference Finals in 2013 alongside Mike Conley, Marc Gasol, Zach Randolph, and Tony Allen.