Hoops Rumors is breaking down the 2017 offseason for all 30 NBA teams, revisiting the summer’s free agent signings, trades, draft picks, departures, and more. We’ll evaluate each team’s moves from the last several months and look ahead to what the 2017/18 season holds for all 30 franchises. Today, we’re focusing on the Philadelphia 76ers. 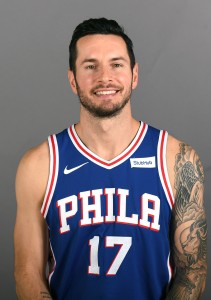 Check out the Philadelphia 76ers’ full roster and depth chart at RosterResource.com.

Gone are the days of tanking, salary cap manipulation, and Philadelphians routing for their team to sink further down in the standings. Here are the nights of watching budding talent, employing a full squad of NBA players, and spotting Joel Embiid running down one-way streets in the City of Brotherly Love.

After years of intentionally taking steps back – or at least making no effort to move up in the standings – the Sixers are set to head into the 2017/18 season with a team that should be competitive in a weakened Eastern Conference. President of basketball operations Bryan Colangelo entered the offseason with plenty of flexibility and he completed an impressive series of summer moves without sacrificing that flexibility for the future.

The Sixers let Sergio Rodriguez and Tiago Splitter walk once their respective contracts expired. They also sent Shawn Long, a player who showed flashes of potential as an NBA role player, to Houston during Daryl Morey’s finest day as a salary cap wizard, and waived Gerald Henderson in what was likely a financially-driven decision.

Given the modest production the Sixers received from those players, Alex Poythress may end up being the franchise’s biggest offseason loss. The Kentucky product thrived in the G League last season before finishing the season with Philadelphia. The 24-year-old was a candidate to return to the team as one of the organization’s two-way contract players, but he decided to sign with the Pacers instead. 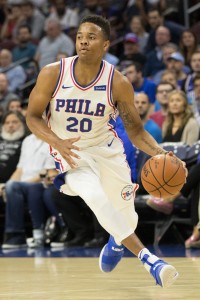 Paying a combined $33MM to J.J. Redick and Amir Johnson this season seems excessive in a vacuum, but the deals actually look like smart signings. Philadelphia currently sits below the salary floor, so inking the two veterans on one-year contracts does nothing to hurt the Sixers’ financial obligations this season and allows the club to maintain flexibility in the future.

Both signings make sense from a basketball perspective as well. Redick, a career 41.5% shooter from downtown, adds to the team’s spacing, something that will benefit Embiid in the post and Ben Simmons when he drives through the lane. The Duke alum is penciled in as the team’s starting two guard, but he understands his job requires more than simply performing well in the starting unit.

“We are in the second phase of our career,” Redick said of himself and Johnson. “We’ve been through enough now and have enough wisdom that we can be an effective elder.”

Having Johnson, who was the third-best power forward on defense last season (per ESPN’s Real Plus/Minus) mingling with the team’s young frontcourt talent in practice everyday is a solid strategy. Low-post defense is a skill that often takes considerable time for young prospects to learn and the franchise is banking on Johnson’s guidance to streamline that process.

Trading for Markelle Fultz was a calculated risk, one that was made feasible by Sam Hinkie‘s asset accumulation strategy. If the franchise didn’t possess an array of future picks, Colangelo would have had to think long and hard about giving up a future first for the right to move up two spots in the draft. Perhaps he tries to shoehorn Jahlil Okafor – someone who is seemingly perpetually on the trade block – to Boston in the pre-draft deal; maybe he gives away a future Sixers’ selection; maybe he doesn’t make the trade at all. As a result of his predecessor’s work, Colangelo was able to move up to select Fultz while keeping the cupboard well stocked.

The addition of Fultz, along with getting Simmons and Embiid back on the court, brings a new level of excitement to the organization, while the veteran additions will help to ensure the young talent remains on the right path to living up to the hype.

The Sixers are expected to improve in the win column and compete for a playoff berth in a new-look Eastern Conference. Offshore oddsmakers place the team’s over/under at 41.5 wins, while ESPN’s Kevin Pelton projects the team to win roughly 33 games. It’s worth noting that those offshore odds are partially derived by betting behavior of consumers, whereas the models produced by Pelton are wholly based on predictive analytics.

A win total somewhere between those two projections is the most likely outcome as long as the team avoids major injuries. That’s far from a certainty, given Embiid’s history of knee and foot issues, Simmons’ surgically repaired foot, and Fultz’s Summer League scare. But if Philly’s young Big-If-3 (trademark pending) can stay on the court, the franchise could find itself in the playoffs for the first time since 2012.

Shortly after that playoff run, Hinkie joined the team and implemented his analytical-driven approach to roster building. That strategy set the stage for the product on the floor this season.

With the arrival of a more Colangelonian infrastructure, The Process appears set to enter its growth phase; those that trusted it could easily be rewarded this season and beyond.

One thought on “2017 Offseason In Review: Philadelphia 76ers”