JULY 16: The Suns have officially re-signed Oubre, the team announced today in a press release. 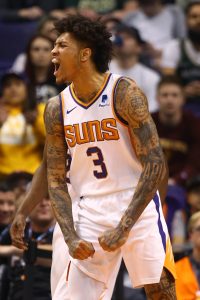 Oubre, who had been the last unsigned RFA on the market, will sign a two-year, $30MM contract, per Wojnarowski. According to Michael Scotto of The Athletic (Twitter link), it’s a fully guaranteed deal with no options. It also has a descending structure, with a $15.7MM first-year salary, tweets John Gambadoro of Arizona Sports 98.7.

Oubre, 23, was selected 15th overall in the 2015 draft and spent the first three and a half years of his NBA career in Washington. The Wizards, who didn’t appear committed to paying him in free agency this summer, attempted to trade Oubre to Memphis in a three-team trade for Trevor Ariza last December, then pivoted when that deal fell through and sent him directly to Phoenix in a package for Ariza a few days later.

As they completed their offseason roster moves, the Suns made it a priority to keep Oubre’s cap hold on their books in order to retain his Bird Rights and go over the cap to re-sign him, sending Josh Jackson, De’Anthony Melton, and a pair of second-round picks to Memphis in a trade to shed salary and avoid losing the former Wizard.

While Oubre may have been hoping for a longer-term commitment, his new two-year contract will give the young forward some financial security and allow him to return to the open market as an unrestricted free agent when he’s just 25 years old, Wojnarowski observes (via Twitter).