Veteran NBA center Cole Aldrich has officially signed with China’s Tianjin Gold Lions, as Nicola Lupo of Sportando relays. Jeff Goodman of Stadium first reported last week that Aldrich was expected to head to China, but didn’t specify which team the big man would be joining.

Aldrich, who will turn 30 in three weeks, spent the last two seasons in Minnesota, playing a limited role for the Timberwolves. In 2017/18, he appeared in just 21 games and played only 49 total minutes.

While his contract with Minnesota covered the 2018/19 season, Aldrich’s salary for the coming year only featured a modest partial guarantee, so the Wolves waived him in June before the full guarantee kicked in, making him an unrestricted free agent. He subsequently received a camp invite from the Hawks, who released him last Tuesday.

For his career, Aldrich – the 11th overall pick in 2010 – has recorded 3.1 PPG and 3.3 RPG in 339 regular season games for the Thunder, Rockets, Kings, Knicks, Clippers, and Timberwolves.

2:32pm: The Hawks have waived Aldrich, according to Chris Vivlamore of The Atlanta Journal-Constitution (Twitter link). The timing of the move is likely no coincidence, as the path is now clear for the center to sign a deal overseas.

Aldrich, who will turn 30 later this month, remains under contract with the Hawks for now. However, he has a non-guaranteed contract, and Atlanta is already carrying 15 players on fully guaranteed salaries, making the big man a long shot to earn a spot on the regular season roster.

It’s not uncommon for a player to line up a contract agreement in another league if he expects to be released by his NBA team. Earlier this offseason, for instance, news broke of David Stockton‘s new deal with German team Medi Bayreuth approximately two weeks before he was actually waived by the Jazz.

In Aldrich’s case, he and his representatives may have received word that a roster spot in Atlanta isn’t in the cards and gotten a head start on seeking out another professional opportunity. That remains unconfirmed though.

Aldrich spent the last two seasons in Minnesota, playing a limited role for the Timberwolves. In 2017/18, he appeared in just 21 games and played only 49 total minutes. While his contract covered the 2018/19 season, Aldrich’s salary for the coming year only featured a modest partial guarantee, so the Wolves waived him in June before the full guarantee kicked in, making him an unrestricted free agent. He subsequently received a camp invite from the Hawks.

SEPTEMBER 18: The Hawks have filled their offseason roster by officially signing Aldrich, the team announced today in a press release. 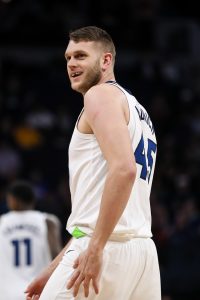 SEPTEMBER 6: The Hawks have reached an agreement with free agent center Cole Aldrich on a contract, reports Charley Walters of The St. Paul Pioneer Press (Twitter link). According to Darren Wolfson of 1500ESPN (via Twitter), Aldrich will sign a non-guaranteed camp deal with Atlanta.

Aldrich, who will turn 30 next month, spent the last two seasons in Minnesota, playing a limited role for the Timberwolves. In 2017/18, he appeared in just 21 games and played only 49 total minutes. While his contract covered the 2018/19 season, Aldrich’s salary for the coming year only featured a modest partial guarantee, so the Wolves waived him in June before the full guarantee kicked in, making him an unrestricted free agent.

Before making their reported agreement with Aldrich official, the Hawks have two openings on their 20-man offseason roster. However, 15 of their 18 players currently under contract have guaranteed standard contracts for 2018/19, leaving no clear path for the veteran big man to make the regular season roster.

Still, Wolfson suggests that Aldrich is “motivated” to stick with Atlanta, so we’ll see if the club considers trading or waiving any players from its presumed 15-man squad to open up a spot for the former Timberwolf. Another former lottery pick, Thomas Robinson, will also be in camp with the Hawks on a non-guaranteed deal in the hopes of claiming a roster spot.

As Bobby Marks of ESPN notes, Minnesota will have the option to stretch the amount still owed to Aldrich over three years, which would open up an additional $1.37MM in cap room this summer.

Darren Wolfson of 5 Eyewitness News predicts that the Wolves will stretch Aldrich’s contract in order to avoid potential tax penalties should the team choose to use the full value of its MLE.

Aldrich, 29, averaged a career-low 0.6 PPG in only 21 games this past season. Throughout his eight-season career, he has averaged 3.1 points in 10.0 minutes per contest.

Despite reports of Towns’ unhappiness, Thibodeau says the relationship between the franchise and its star player is all well, telling reporters that everybody is in a good place.

“Yeah, yeah. He’s doing quite well. And I love KAT. He has had a terrific start to his career… To get to where we are — obviously we’re not ultimately where we want to be, but it was a major step forward — you can’t do it individually. It’s got to be the whole group doing it together. And for the most part, I think we are in a good place.”

Regarding the draft, the Wolves own the No. 20 and No. 48 picks and Thibodeau said anything remains possible as the team tries to address their needs.

“It’s one of the few times through the year you have a chance to improve the club, so all options are open right now. We know there’s a great challenge in front of us. The shooting and the toughness, the defense and building the depth.”

As for free agency, Layden said that the team would concentrate more on the free agent market once July 1 draws closer, but that he knows the type of player Thibodeau looks for.

There’s more out of Minneapolis:

The Thunder have three players who’ve grown used to getting the final shot over the course of long, impressive careers. Now, Royce Young of ESPN writes, they’ll have to figure out who gets the ball when the game is on the line.

While Russell Westbrook was the painfully obvious choice last season, he’s joined on the Thunder by Carmelo Anthony and Paul George. Both Anthony and George have traditionally been the focal point of their teams’ offenses and were often the go-to options down the stretch, the latter even going so far as to lambaste former teammate C.J. Miles for taking a last-second shot in the playoffs last spring.

“Carmelo’s been a closeout guy the places he’s been, the same thing with Paul. But any time you have a team you have to do it by finding the open man,” Thunder head coach Billy Donovan said. “Clearly for us last year, somebody creating and generating a shot for himself or someone else, it was Russell. But obviously now with Carmelo and Paul being here, I think it’s about making the right play and right decision.”

One knock on the Thunder in the past has been their reliance on isolation basketball when the game is on the long. Considering the roster balance last season, that style of play was more or less expected. With a number of legitimate offensive threats in 2017/18, however, the expectations for ball movement – and making sound decisions – should rise.

In another one of his in-depth NBA preview features, ESPN’s Zach Lowe has grouped the NBA’s 30 teams into tiers, with the Warriors in the top tier on their own, followed by the Cavaliers, Thunder, Rockets, and Spurs in tier two. Lowe’s piece examines each club, with a handful of Eastern Conference teams – the Nets, Hawks, Knicks, Pacers, and Bulls – bringing up the rear.

Along the way, Lowe drops a few noteworthy tidbits of information about roster moves and trade possibilities, so let’s dive in and round up the highlights…

Brooklyn GM Sean Marks got Raptors president Masai Ujiri to sweeten the deal involving DeMarre Carroll as they talked during Saturday’s games at the Las Vegas Summer League, writes Brian Lewis of The New York Post. Toronto’s original offer involved just Carroll and a first-round pick, but Marks was able to convince Ujiri to send along a second-rounder and take back the $3MM contract of Justin Hamilton.

The deal provides needed cap relief for the Raptors, while giving the Nets a replacement for Otto Porter after the Wizards announced their intention to match Brooklyn’s four-year, $106.5MM offer sheet. The trade may not be finalized before Thursday while the Nets wait for the Wizards to conduct Porter’s physical and report the results to the league.

There’s more today out of Brooklyn:

Free agent big man Willie Reed is meeting today with the Clippers, league sources tell Alex Kennedy of HoopsHype (Twitter link). ESPN’s Adrian Wojnarowski confirms the meeting and adds (via Twitter) that Jeff Withey is also sitting down with the club today. Los Angeles doesn’t have a whole lot of financial flexibility left, having used most of its mid-level exception on Milos Teodosic, but the club remains in the market for a backup for DeAndre Jordan, with Marreese Speights having opted out.

The Timberwolves were linked to free agent swingman C.J. Miles earlier today, but weren’t necessarily considered a probable landing spot for Miles due to the team’s lack of cap flexibility. However, according to Darren Wolfson of 5 Eyewitness News (Twitter link), who passed along the initial report on Miles, the Pacers are open to the idea of a sign-and-trade which would net them Cole Aldrich‘s contract and OKC’s 2018 first-round pick from Minnesota.

Both teams would have to agree on that sign-and-trade scenario, and of course Miles would also have to be on board, so there may be some snags along the way. But as Wolfson points out, there are ways for the Wolves to get creative if they really want to land Miles or another free agent.

Wolfson has more on the Wolves, tweeting that he has heard the team made an offer to Nick Young. That offer would likely be worth the $4.3MM room exception, and Young turned down a $5.67MM player option with the Lakers last month, so I’d be surprised if Minnesota’s offer is enough to land him, but the club clearly remains on the lookout for shooting help.