The G League Ignite officially filled out its roster for the 2022/23 season this week, announcing in a press release that seven veteran players have joined the team and will complement the group of young prospects already under contract with the Ignite. Former NBA guard John Jenkins and big man Eric Mika are among the team’s vets.

The Ignite also announced that they have a new general manager, having named Anthony McClish to fill the role. McClish, who worked as a consultant for the Ignite for the last two seasons, was previously the general manager of the Stockton Kings, Sacramento’s G League affiliate.

Team USA will play a pair of qualifying games for the 2023 World Cup this month, squaring off against Uruguay on August 25 in Las Vegas and then facing Colombia on August 29 in Barranquilla, Colombia.

USA Basketball issued a press release today announcing its 12-man roster for those qualifying games. The following players will be representing the U.S. on a club led by head coach Jim Boylen:

McClung is the only member of the 12-man group who is currently under contract with an NBA team, having signed a training camp contract with the Warriors last month. However, everyone on the roster except for Ellison has appeared in at least one NBA regular season game.

Galloway and Jenkins are the most experienced NBA veterans on the roster. Galloway has 452 regular season games for seven teams under his belt, while Jenkins has made 171 appearances for five clubs.

Team USA has a 5-1 record through the first three qualifying windows, putting the squad in a tie for first place with Brazil atop Group F. After this month’s games, the remaining two qualifying windows are scheduled for November and February — teams will end up playing a total of 12 qualifying contests apiece.

The 2023 World Cup will take place in the Philippines, Japan, and Indonesia from August 25 to September 10 next year. Assuming its team qualifies – which looks like a pretty safe bet – USA Basketball is expected to send a roster of more accomplished NBA veterans to the event.

Here are Friday’s G League assignments and recalls from around the league:

FEBRUARY 6: Nearly 24 hours after it was agreed upon, the Kings and Hawks have officially announced their trade sending Dedmon and a pair of second-round picks to Atlanta in exchange for Parker and Len. Sacramento also confirmed that the team has released Eric Mika, as we relayed in a separate story. 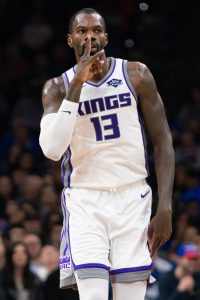 FEBRUARY 5: Dewayne Dedmon will return to Atlanta, as the Kings have reached a deal to send their unhappy center to the Hawks, tweets ESPN’s Adrian Wojnarowski.  Sacramento will receive Jabari Parker and Alex Len in return, while Atlanta will get a pair of second-round picks.

Because the Kings have a full roster, they’ll have to open a spot before the deal can be completed. One possibility is an early release for Eric Mika, who signed a 10-day contract on February 1.

Dedmon was the Hawks’ starting center for the past two seasons before joining the Kings in free agency last summer on a three-year, $41MM contract. Things quickly went south in Sacramento as he lost his starting job to Richaun Holmes. He became outspoken about his lack of playing time and was fined $50K in early January for making a public trade request. Dedmon averaged 5.1 points and 4.9 rebounds in 34 games with the Kings.

Sacramento adds Parker, who holds a $6.5MM player option for next season, along with Len, who has a $4.16MM expiring contract. Both are former top-five draft picks who are trying to revive their careers after disappointing starts.

Parker averaged 15.0 points and 6.0 rebounds in 32 games after signing with the Hawks as a free agent last summer. He was also traded at last year’s deadline, making the Kings his fourth team in the past two seasons. Len was averaging 8.7 PPG and 5.8 RPG through 40 games in his second season with Atlanta.

The deal didn’t catch Len by surprise, according to Chris Kirschner of The Athletic. (Twitter link). When asked before tonight’s game about the trade that will bring Clint Capela to Atlanta, Len responded, “We have what like 24 hours left (until the trade deadline)? It’s going to be really interesting because we have four bigs. Something is probably going to happen now.”

The Kings have terminated Eric Mika‘s 10-day contract to open a roster spot so they can complete a trade with the Hawks, tweets James Ham of NBC Sports Bay Area.

Sacramento agreed last night to send Dewayne Dedmon to Atlanta in exchange for Jabari Parker and Alex Len. Because the Kings had a full roster, another move was necessary before the deal could be finalized.

Mika, a 25-year-old power forward, got into just one game after signing his contract on February 1. He scored six points and collected seven rebounds in 19 minutes.

The Kings have inked power forward/center Eric Mika to a 10-day contract, according to a team press release.

The big man logged a career-best 24 rebounds against the Santa Cruz Warriors on November 9, 2019.

The 25-year-old out of BYU, who also played on Sacramento’s summer league squad,  should help shore up the Kings’ depth at the power forward and center positions. Kings big men Marvin Bagley and Richaun Holmes remain out for at least several weeks with injuries.

5:08pm: Thompson’s signing is official, according to a team press release.

11:20am: The Kings are making a series of changes to their 20-man roster, announcing today in a press release that they’ve waived camp invitees Eric Mika and Isaiah Pineiro. Sources tell Jason Jones of The Athletic (Twitter link) that Sacramento has agreed to a partially guaranteed deal with Hollis Thompson, who will fill one of those newly-opened roster spots.

Mika, a former BYU center who went undrafted in 2017 and has played overseas in recent years, joined the Kings for Summer League play in July, then signed an Exhibit 10 contract with the club in August. He racked up four points and six rebounds in just four minutes of action in his lone preseason appearance for Sacramento

Pineiro, an Auburn, California native, also signed an Exhibit 10 contract with the Kings after playing for the team in Summer League. Like Mika, the forward appeared in one preseason game for Sacramento.

Both players look like candidates to ultimately join the Stockton Kings, Sacramento’s G League affiliate. They’d be eligible for Exhibit 10 bonuses worth up to $50K if they spend at least 60 days in Stockton.

As for Thompson, the former Sixers and Pelicans swingman last played in the NBA during the 2016/17 season. The Georgetown alum averaged 7.7 PPG and 3.1 RPG with a .386 3PT% in 265 NBA contests, and has played in Greece, Germany, and the G League since then.

It’s not clear if Thompson will get a chance to compete for the 15th and final spot on the Kings’ regular season roster. Tyler Lydon and Tyler Ulis are currently vying to fill that opening.

Mika went undrafted out of BYU in 2017. He played overseas with Germani Basket Brescia of the Italian Lega Basket Serie A and Medi Bayreuth of Germany’s Basketball Bundesliga last season, posting averages of 8.2 PPG and 3.9 RPG in 15.9 MPG in 41 games.

Duke’s Jayson Tatum worked out today in Los Angeles for the Suns, who will give him strong consideration with their No. 4 pick, writes Doug Haller of The Arizona Republic. The 6’8″ forward may be the most offensively talented player in the draft, but he has shortcomings on defense, which is the prime concern in Phoenix. Still, he is ranked fourth or fifth in most mock drafts and could easily wind up in a Suns uniform.

There’s more news from a busy day of draft workouts:

The Wizards will face plenty of competition for free agent Otto Porter if they don’t submit a max offer, writes Bobby Marks of The Vertical. Coming off a season in which he put up career-best numbers in points, rebounds, steals and blocks, Porter is eligible for a new contract starting at $25.5MM per season. Because he is restricted, Washington can match any offer he receives. Another free agent priority will be Bojan Bogdanovic, who was acquired from the Nets at the trade deadline. He will be looking for a substantial raise from the $3.73MM he made this season, and Marks says Washington will have to determine how much luxury tax it is willing to absorb to keep him.