Veteran center Ian Mahinmi has decided to call it a career, announcing his retirement during an appearance on ‘NBA Extra,’ a show produced by international outlet beIN Sports (video link). 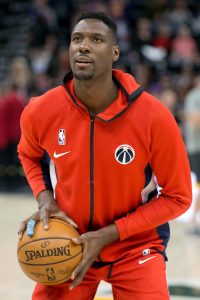 Mahinmi, 34, made his NBA debut in 2007, but was playing professional basketball well before then, spending time with multiple French clubs beginning in 2003. After being selected 28th overall in the 2005 draft by the Spurs, he was a draft-and-stash prospect in France for two more years before coming stateside.

Mahinmi appeared in 618 total regular season NBA games for the Spurs, Mavericks, Pacers, and Wizards, averaging 5.2 PPG and 4.4 RPG in 16.8 MPG. The big man, who also played in 67 postseason contests, won a title with Dallas in 2011 and was a beneficiary of the 2016 salary cap spike, signing a four-year, $64MM contract with Washington during that offseason.

That ended up being Mahinmi’s last NBA contract, as he went unsigned when he reached unrestricted free agency in 2020. We heard in April that he was one of the options the Heat considered before they signed Dewayne Dedmon, but Mahinmi ultimately didn’t catch on with any team in 2020/21, prompting him to decide to hang up his sneakers this summer.

As he transitions to the next phase of his career, Mahinmi will be involved with NBA Africa as one of the investors in the venture, per beIN Sports.

When the Heat make the anticipated Dewayne Dedmon signing official, his contract will cover the rest of the season rather than just 10 days, writes Barry Jackson of The Miami Herald. Miami opted for a longer deal, according to Jackson, because it doesn’t expect anyone better to become available on the buyout market. Players who have appeared in at least one NBA game this season must be waived by Friday to be eligible for the postseason with their new team.

The Heat were looking for a big man who would accept not playing every game, which ruled out DeMarcus Cousins, who has since joined the Clippers on a 10-day deal. Jackson lists Ian Mahinmi, Thon Maker, Dewan Hernandez, Skal Labissiere, Tyler Zeller, Kyle Alexander, Trey Mourning, Kyle O’Quinn, Justin Patton and Anthony Tolliver as some of the names Miami considered before reaching an agreement with Dedmon.

In 2019, Dedmon signed a three-year, $40MM contract with the Kings, but he quickly lost his job as starting center. Poor three-point shooting is a major reason that Sacramento soured on him, Jackson adds, and he was eventually traded to the Hawks and then the Pistons, who released him in November.

The Heat face a deadline to add a 14th player to their roster by Thursday. If Dedmon signs then, his contract will carry a cap hit in the neighborhood of $433K. Miami would be about $314K below the tax line and could add a 15th player later this season without going into luxury tax territory.

There’s more on the Heat, all from Jackson:

Since the Wizards landed in Orlando for the seeding games, Mahinmi has not played a single minute. This season, the 33-year-old center only played in 38 games, averaging 7.4 PPG and 5.7 RPG.

The Wizards were expecting Mahinmi to be their veteran rim protector when they signed him to a four-year, $64MM contract in the summer of 2016. However, that never came to fruition due to injuries. Over the last two seasons, Mahinmi has only played in 72 games. The veteran center is scheduled to be an unrestricted free agent this offseason.

Here’s more from across the Eastern Conference:

The Wizards will focus on improving their defense, especially on the interior, during the upcoming offseason, general manager Tommy Sheppard tells Fred Katz of The Athletic. Washington ranked last in the league in opponents’ points per possession, although the numbers were better over the last month of the season. They allowed teams to shoot 66% from the restricted area, which ranks third from the bottom.

“We’re gonna improve defensively, and a lot of that is by repetition and continuity,” Sheppard said. “We certainly look inside. Maybe we can get some more physicality there and get some more help out on the wings. There’s a lot of need that comes, but sometimes those needs get met by just staying patient (with your) players.”

Sheppard also talked about the need to find a rim protector, which the Wizards didn’t have with the center spot being manned by Thomas Bryant and Moritz Wagner, along with Ian Mahinmi, who is headed for free agency. Katz suggests Wagner could be effective as a power forward if the team can find a shot blocker for him to play alongside.

Although Washington will be over the salary cap when the offseason arrives, the team will have its full mid-level and biannual exceptions available, along with a lottery pick, to pursue a defensive-minded center.

Wizards GM: John Wall Not Expected Back This Season

Although John Wall has left the door open for the possibility of a return to the court before the 2019/20 season ends, Wizards general manager Tommy Sheppard essentially closed that door this week, as Chase Hughes of NBC Sports Washington relays. Having mentioned that Bradley Beal‘s life will be easier when Wall returns “next year,” Sheppard was asked for a follow-up and explained that the team doesn’t expect its starting point guard back until next season.

“I think we have maintained that all along. We didn’t plan on seeing him this year,” Sheppard said. “I think that’s fair to John, to manage the expectations for him. He’s on his way, but he’s not there and he’s not close yet. He’s a lot closer than he was a year ago when the injury happened.”

Given the Wizards’ 17-32 record, it makes sense that the team will be cautious with their star point guard and give him a few extra months to get to 100%. When he spoke to Chris Miller of NBC Sports Washington about visualizing his first game back, Wall talked as if he’s targeting opening night in 2020/21.

“I’ve gotta be honest with you, if our first game isn’t in D.C. then I probably won’t play,” Wall joked. “Just to be realistic. I’m going to try to force the NBA for my first game to be at home next season.”

Let’s round up a few more Wizards notes…

Kristaps Porzingis could see a lot more action at center the remainder of the season, according to Eddie Sefko of the team’s website. The Mavericks need to replace the minutes of Dwight Powell, who is out for the season with a ruptured right Achilles. When paired with Maxi Kleber, Porzingis can play either center or power forward. Porzingis can utilize his playmaking skills from the middle, as he did for a stretch against the Clippers on Tuesday.

“We’ve done it some,” coach Rick Carlisle said while adding, “The bind you get in is with rebounding and that was obvious in the second half. We were really up against it on the boards. … But in terms of the lineup and everything else, there’s a lot of things we’ve got to keep on the table.”

We have more on the Mavericks:

Mahinmi, who missed all of training camp and the first 19 games of the season due to an Achilles’ injury, has made a noticeable impact on both ends of the floor this month — much to the delight of his teammates.

“He’s been great the first couple of games. Just his presence, his activeness, his long arms, his altering shots at the rim,” Bradley Beal said, as relayed by Buckner. “He’s catching on the roll; he’s finishing. So he’s doing a lot of things that we kind of missed a lot. We didn’t have that rim protector in a way. He’s blocking shots. He’s altering shots at the rim. He’s rebounding.”

Mahinmi, a veteran 6’11” center who spent time with the defensive-minded Pacers during several postseason runs from 2012-16, is capable of providing solid production off the bench when healthy.

“He’s definitely a factor,” coach Scott Brooks said of Mahinmi. “When he’s healthy, he protects the rim, and we’re a better defensive team when he’s out there. Hopefully we can keep his minutes up at a good number and keep playing well. He’s going to definitely help us.”

Mahinmi’s presence will be needed going forward with Bryant rehabbing from a stress reaction in his foot and Moritz Wagner dealing with a sore ankle. The Wizards have recorded just a 7-17 record through 24 contests, with upcoming games scheduled against the Pistons on Monday, Bulls on Wednesday, and Raptors on Friday.

Coach James Borrego is losing patience with the Hornets‘ defense and he’s not afraid to shake things up, Rick Bonnell of the Charlotte Observer relays.

“You have to value your time on the floor. This isn’t a God-given right to step on the floor and just go through the motions,” Borrego said recently. “If you’re not doing your job, if you don’t have great effort, if you’re not engaged from Minute 1, then I need to make a change — bring someone in off the bench or make a lineup change.”

Charlotte is 6-12 and the team has already started 12 different lineups this season. Borrego is searching for the best combination of players that will help the team win games regardless of each player’s contract status or seniority on the team.

As the Hornets look to right the ship, let’s take a look at more from the Southeast Division:

The injury bug continues to plague the Wizards, who announced today in a press release that veteran center Ian Mahinmi has been diagnosed with a strained right Achilles tendon and will be re-evaluated in six weeks.

Mahinmi, who is entering the final year of the lucrative four-year contract he signed in 2016, is coming off a season in which he averaged 4.1 PPG and 3.8 RPG in just 34 games (14.6 MPG). It remains to be seen how much action the big man will get this year even once he’s healthy, as Thomas Bryant will start at center for Washington. Rui Hachimura, Davis Bertans, and Moritz Wagner also figure to play regular minutes in the frontcourt.

A six-week timetable would sideline Mahinmi through at least November 14, keeping him on the shelf for the first nine games of the Wizards’ season. Although he’ll be re-evaluated at that point, there’s no guarantee he’ll be immediately ready to return.

Mahinmi is the latest Wizard projected to miss the start of the season, joining Isaiah Thomas (thumb) and John Wall (Achilles). It’s not clear whether Troy Brown (calf) and C.J. Miles (foot) will be ready to go by opening night.

The Wizards will open training camp with several important players sidelined, tweets Candace Buckner of The Washington Post. John Wall, who may miss the entire season with a ruptured Achilles, is obviously a non-participant. He’s joined on the sidelines by Isaiah Thomas, who is recovering from thumb surgery; Troy Brown, who has a left calf strain; Ian Mahinmi, who is battling Achilles pain; and C.J. Miles, who had surgery on his left foot in July.

“We have some challenges ahead right now with our limited guys in training camp,” coach Scott Brooks admitted.