Ty Lawson, Corey Brewer, Jordan Crawford, Jonathon Simmons, Norris Cole, Festus Ezeli, and Jordan Hill are among the many former NBA players whose names are in the BIG3 draft pool for the 2022 season, per the league’s official website.

The BIG3 will hold its draft on Wednesday evening in Los Angeles as it gears up for the coming season. As we previously relayed, the first games of 2022 are scheduled for June 18 and this will be the first year in which the BIG3 holds an All-Star Game.

The Hornets could be the next team for journeyman center Jordan Hill, writes Sean Deveney of The Sporting News.

Hill, who has played for five franchises in his eight-year career, was waived by the Timberwolves in late June before his 2017/18 contract became guaranteed. A free agent addition last summer, Hill played in just seven games for Minnesota.

Charlotte is a little more than $2MM below the luxury-tax line with 14 players under contract. A source told The Sporting News the team would like to add one more low-cost, veteran big man to its roster. Deveney lists Ersan Ilyasova, Terrence Jones and Willie Reed as other possibilities.

Hill played for Hornets coach Steve Clifford in 2012/13 when Clifford was an assistant with the Lakers. The eighth pick of the 2009 draft by the Knicks, Hill has also spent time with the Rockets and Pacers. If he does sign with Charlotte, Hill will serve as a backup to Dwight Howard, who was acquired from the Hawks in a trade last month.

The Timberwolves have waived power forward/center Jordan Hill, the team announced in a press release.

Hill was signed as a free agent last summer but appeared in just seven games, averaging 1.7 PPG and 2.0 RPG in 6.7 MPG. He inked a two-year, $8.18MM contract but the second year was not guaranteed. He was due to make $4.18MM next season and the club had until June 30th to decide whether to retain him.

The cost-saving move gives Minnesota more money to play with in free agency, as well as to absorb salaries in trades. Given Hill’s lack of playing time, the move comes as no surprise, as Jon Krawczynski of the Associated Press tweets.

Hill, 29, has played a total of 409 career games for the Rockets, Knicks, Lakers and Pacers as well as the Timberwolves. He posted averages of 7.9 PPG and 5.8 RPG during those games.

Cole Aldrich, who signed a three-year, $22MM deal with the Wolves over the summer, was brought in to be a veteran mentor to the younger guys on the team and he’s enjoying his role, as he tells Michael Rand of The StarTribune. “Well, with [Jordan Hill], myself, [Brandon Rush] and we had John Lucas earlier in the year, it’s fun to have those guys and the young guys,” Aldrich said. “The teams we were on last year, we were all on older teams, playoff teams. Being able to bring our experience from those teams to a younger group of guys has been a lot of fun.”

More from around the Northwest…

George Hill, who has been sidelined with a toe injury, could return as soon as Thursday against the Sixers, according to Tim MacMahon of ESPN.com (ESPN Now link). The Jazz traded for Hill during the offseason, but the point guard has only been able to play in 11 contests due to injuries.

Here’s more from the Northwest Division:

After a year away from the game, Tom Thibodeau is back as coach and president of basketball operations with the Timberwolves, who have one of the most intriguing collections of young talent in the NBA. Minnesota added point guard Kris Dunn through the draft this summer and improved its bench by signing free agents Jordan Hill, Cole Aldrich and Brandon Rush.

Kent Youngblood of The Star-Tribune talked with Thibodeau about his return to the game, his reputation as a defensive coach, his expectations for the young Wolves and Ricky Rubio‘s role now that Dunn is in town. Here are some highlights of the interview:

On Rubio’s role in Thibodeau’s offense:

“I think he’ll fit in very well. He’s a good player. He practices hard. He can really pass the ball. Passing and defense are two things that help build your team, brings the best out of people. I think Ricky has the ability to make other people better.”

On Rubio and Dunn as a possible starting backcourt:

“We’re going to get a lot of those questions answered in the preseason as we go forward. You want to go step by step. You don’t want to skip over things. I like guys who can play multiple positions, I like different combinations. There are times when you play two point guards together. I did that a lot in Chicago, just the speed of the game changes.”

On possible improvement from Nemanja Bjelica:

“I’m excited about him. He’s had a great summer. He’s in really good shape. He has a very unique skill set: He can shoot the three, he can put it on the floor. The one thing that is probably overlooked is his playmaking ability. You can run pick-and-roll with him. He’s got great vision, he can pass over people.”

On the additions of Aldrich and Hill:

“The way Cole played the second half of last year, I think he’s figured out who he is. The last two years have been very good for him. He fits in well, plays to his strengths, covers up his weaknesses, makes the team function well. And Jordan has been a very good player in this league. That gives us quality depth up front.”

“I don’t want to put a lid on what we can do, but I want us doing the right things. Concentrate on that improvement and how fast we get there, I don’t know. We’re young and we’re going to improve. I think we’ll be a different team at the end of the year than what we were at the beginning of the year.”

There were conflicting reports on the details of the second year of Rajon Rondo‘s new contract with the Bulls when it was agreed upon and signed earlier this month, but Eric Pincus of Basketball Insiders provides some clarity, writing that only $3MM of Rondo’s $13.397MM second-year salary is guaranteed. That second year essentially functions as a team option for the Bulls, who could waive Rondo by June 30 next year if his first year in Chicago goes south.

JULY 13: The Timberwolves and free agent big man Jordan Hill have agreed to terms on a two-year contract, reports Adrian Wojnarowski of The Vertical (via Twitter). According to Wojnarowski, Hill’s new deal will be worth $8MM. 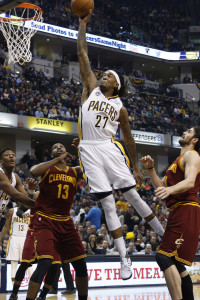 Hill, who will turn 29 later this month, appeared in 73 regular-season games for the Pacers last season, starting 11 of those games. In just over 20 minutes per contest, he averaged 8.8 PPG and 6.2 RPG, shooting 50.6% from the floor. A seven-year veteran, Hill previously spent time with the Knicks, Rockets, and Lakers.

For the Wolves, Hill is the second notable veteran big man to agree to terms with the team this month. Minnesota also struck a three-year deal with Cole Aldrich. While Aldrich and Hill aren’t exactly All-Star-caliber players, the team appears to be getting good value out of the duo. Based on the terms reported, Aldrich and Hill will average just over $11MM per season.

By comparison, Timofey Mozgov and Ian Mahinmi will be earning $16MM annually, while Bismack Biyombo will get $18MM per year — and all of those free agents signed longer-term deals than Aldrich or Hill.

Along with Aldrich, Hill will provide the Wolves with solid veteran depth in a frontcourt that also features Nikola Pekovic, Gorgui Dieng, Nemanja Bjelica, and reigning Rookie of the Year Karl-Anthony Towns.

Speaking to SiriusXM NBA Radio (SoundCloud link) in Las Vegas, Sixers general manager Bryan Colangelo acknowledged that his team’s roster is “top-heavy,” with a logjam of young talent at the center position. Although Colangelo said the Sixers like Nerlens Noel, Joel Embiid, and Jahlil Okafor, he suggested, half-jokingly, that he’s “absolutely not” comfortable heading into the season with all three still on the roster.

“What we are comfortable doing is saying we’re not going to make a bad deal just to make a deal,” the Sixers GM said. “I think we could be a better basketball team if we could distribute that talent better, and maybe take one of those assets and address other needs on the roster. But I think right now, it’s best to say we like all of them [and] we want to see if we can make the most out of each of them in terms of their contributions to this team. At the end of the day, the reality says one probably has to go at some point — but only when the deal is right.”

Here’s more from out of the Atlantic division:

Jazz center Rudy Gobert believes “something good is going to happen” in Utah after the trade for Boris Diaw, relays Jabari Young of The San Antonio Express-News. The Spurs were looking to deal the versatile veteran to create cap room to sign Pau Gasol, and Utah jumped at the opportunity. “He understands the game very well,” Gobert said of his fellow Frenchman. “He’s like a point guard in a big man’s body. It’s like having another coach on the floor. It’s great. I’m very excited.” Diaw, 34, will make $6.5MM next season and a non-guaranteed $7MM for 2017/18.