Jordan Mickey To Play In Russia

JULY 27: Mickey’s one-year deal with Khimki is official, the team announced today in a press release.

“Jordan has ambitions and big desire to play at the highest level,” head coach Georgios Bartzokas said in a statement. “I’m sure, we will help him also as well as he will help Khimki to achieve our goals. I wanted to sign him even last year but didn’t have a chance.”

The 24-year-old forward appeared in 23 games after signing with Miami prior to the start of last season, averaging 4.0 PPG in about 12 minutes per night. He was a second-round pick by the Celtics in 2015 and spent two seasons in Boston before being waived.

If Mickey finalizes a deal with Khimki, he will likely replace Thomas Robinson, who played five NBA seasons before heading overseas in 2017.

The Heat have elected to turn down Jordan Mickey‘s team option for the 2018/19 season, reports Shams Charania of Yahoo Sports (Twitter link). The option would have paid Mickey a salary of approximately $1.6MM. Instead, he’ll become a free agent.

Mickey, who was selected 33rd overall in the 2015 draft by the Celtics, signed with the Heat during the 2017 offseason. In his first – and potentially only – season in Miami, the 6’8″ forward averaged 4.0 PPG and 3.6 RPG in 23 games (12.3 MPG). Mickey wasn’t part of the Heat’s rotation down the stretch, appearing in just six games after the All-Star break.

Although Mickey will now be eligible for restricted free agency, I wouldn’t expect the Heat to extend him a qualifying offer, which would be worth more than his team option. He’s more likely to hit the open market on July 1 as an unrestricted free agent.

With Mickey’s option no longer in play, the Heat have 10 players under contract for the 2018/19 season, including nine guaranteed salaries and Rodney McGruder‘s non-guaranteed deal. Mickey will join Dwyane Wade, Wayne Ellington, Udonis Haslem, and Luke Babbitt as Miami’s free-agents-to-be.

The Heat doubled down on a committee of above-average role players last summer and have leveraged their depth into unexpected success after a dismal 2016. With an elite head coach and an established culture of winning, Pat Riley and Erik Spoelstra have no reason to believe that they can’t continue to field a winner so long as they’re willing to invest in solid players.

The downside of a team built in this fashion, however, is that it lacks the ceiling to be truly dangerous in the postseason and the financial flexibility to change that. Not helping matters, of course, is the fact that the Heat’s highest paid player, Hassan Whiteside, could barely get off the bench in the club’s most recent first-round playoff exit.

The Heat are on pace to cross the luxury tax threshold in 2017/18 thanks to dramatic escalations in the contracts of players like Josh Richardson and Tyler Johnson, making it inevitable that a dramatic roster move is forthcoming.

Is the on-court product good enough to justify the luxury tax expenses? Not likely, so all that’s left is for the franchise decide what direction to go when the dominoes start falling.

Luke Babbitt, SF, 29 (Up) – Signed to a one-year, $2MM deal in 2017
The Heat brought Babbit aboard in a minor deal at the deadline and it wasn’t hard to understand why. The career 40.2% three-point shooter is an attractive niche add and he shot 44.1% on threes through the first half of the season with the Hawks. Unfortunately, he didn’t make enough of a splash in an inconsequential stint with Miami to warrant major interest from the franchise this summer. Babbit will have suitors as an unrestricted free agent in the offseason and could end up plucked by a team able to invest slightly more. 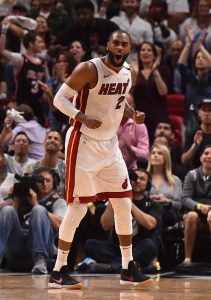 Ellington represents this Heat roster as well as anybody — he’s a reliable veteran that can consistently get the job done. In the hands of the right coach and surrounded by the right players, that’s invaluable. If the Heat decide to continue pushing to contend in the East, it would make sense to retain Ellington for a few more years as a solid rotation piece. That being said, simply bringing back Ellington is no small feat considering the luxury tax implications of such an investment. If the Heat suspect their window is closing, all parties might be better off if the nine-year vet latches on with another contender elsewhere.

Udonis Haslem, C, 38 (Down) – Signed to a one-year, $2MM deal in 2017
The Heat don’t have to worry about long-time big man Haslem testing the waters anywhere other than South Beach, the question is whether or not the 15-year veteran will opt instead for retirement. Haslem seems to have enough in the tank to continue playing in his drastically reduced role and, despite the luxury tax implications making even a minimum deal painful for ownership, there’s no reason to believe the franchise wouldn’t be happy to have him.

Jordan Mickey, PF, 23 (Down) – Signed to a four-year, $5MM deal in 2015
Despite cracking the team’s rotation for a few weeks last December, Mickey didn’t make much of an impact with the Heat during his first season in Miami. One thing that the young big man does have going for him, however, is that his team option is for a modest $1.6MM. At a time when the franchise will be hard-pressed to fill out its 15-man roster without going into tax territory, cheap deals will be of particular interest.

Dwyane Wade, SG, 36 (Up) – Signed to a one-year, $2MM deal in 2017
After an awkward season and a half with the Bulls and Cavaliers, Wade returned to Miami. Immediately, the franchise icon fell back into a rhythm and outplayed his minimum contract. If the Heat opt to continue competing in the East, bringing Wade back is practically essential – from a marketing point of view as much any. While he’s more than a simply symbolic figure, he’s not quite a leading man either, so a deal in the same vein as Dirk Nowitzki‘s $5MM annual with team options could be a solid starting point. If Wade is willing to sign another minimum contract, that’d be all the better for the cap-strapped Heat.

James Johnson may be the latest addition to the Heat’s long list of injured players, writes Ira Winderman of The-Sun Sentinel. Johnson will have an MRI today to determine the extent of a lower-leg issue that forced him to leave Saturday’s game. He is in the midst of another productive season, averaging 10.9 points, 5.2 rebounds and 4.1 assists in 28 games, and an extended absence would be a significant blow to a team already reeling from injuries.

Miami is without center Hassan Whiteside, who has missed two weeks with a bone bruise on his left knee and won’t join the team for a two-game road trip, along with Justise Winslow [strained knee], Okaro White [foot surgery] and Rodney McGruder [leg surgery]. The injuries have created more playing time for rookie Bam Adebayo and free agent additions Kelly Olynyk and Jordan Mickey.

“I’ve spent a lot of time with J.J. He’s talked to me a lot,” Mickey said. “He’s always said, ‘Eventually your number will get called.’ I’m not happy in this particular position [with Johnson out], but I’ll be ready, Coach needs me and I’m already ready.”

The Heat handed Kelly Olynyk a four-year, $46MM contract this offseason and one rival Eastern Conference GM is not impressed with the transaction, as he tells Barry Jackson of The Miami Herald.

“Not a huge fan of Olynyk and think they overpaid by about 20 percent. I have no idea why he got a player option. But basketball wise he’s a good fit,” the anonymous GM told Jackson.

Olynyk’s contract contains a player option worth slightly over $12.2MM for the 2020/21 season. That same GM also offered his opinion on Jordan Mickey, whom the team signed to a two-year contract in August. “End of the bench NBA player [that] can play for 8-10 years in the right system as a shotblocker, rebounder, energy guy,” he said.

For a team that brought back nearly all its key players over the offseason, the Heat head into training camp with a lot of unanswered questions. Barry Jackson of the Miami Herald examines position battles and several other topics in his latest column:

Dwyane Wade may soon find himself on the free agent market if he and the Bulls can agree to a buyout. It was recently reported that a reunion with the Heat remains a realistic option, as the 35-year-old recently moved his children back to the Miami area.

The Heat appear to already have a starting shooting guard in place after inking Dion Waiters to a four-year, $52MM deal this summer, though the former No. 4 overall pick is open to playing alongside the future Hall of Famer. Waiter previously told Barry Jackson of the Miami Herald that he admires Wade and would like to learn from the experienced veteran.

Miami brought back Waiters along with other pieces from its 2016/17 lottery campaign after failing to land a star in free agency yet again. While Wade can no longer be categorized as a star, adding him to the unit should only help the team to climb higher in the standings. Regardless of whether or not the franchise adds Wade, it has a decent chance of avoiding the lottery this season, as ESPN statistician Kevin Pelton projects Miami to end up with the No. 7 seed in the conference.

As we wait to see where Wade ends up playing, check out some notes from Miami:

The Heat’s decision to sign forward Jordan Mickey on Sunday will not impact their ability to make another roster addition, as Ira Winderman of the Sun-Sentinel points out. Mickey signed a $1.5MM contract for the upcoming season and Miami holds an option on a second year. The Heat were already over the salary cap, so it didn’t eat into any available space. Miami still has its $4.328MM room exception available to fill out the roster.

In other items related to the Southeast Division:

The Heat have officially signed former Celtics forward Jordan Mickey, the team announced on its website. The contract has been reported as a two-year deal with a $1.5MM veteran’s minimum guaranteed for the first season and a team option on the second.

The 33rd pick in the 2015 draft, Mickey spent two years with Boston, but played most of that time in the G League. He appeared in 25 games for the Celtics last season, averaging 1.5 points in 5.6 minutes per contest.

The signing gives the Heat 17 players for training camp, three under the maximum. Miami now has 13 players with guaranteed money for the 2017/18 season, along with one on a two-way contract.