Dwight Howard and Joakim Noah both worked out for the Lakers Thursday and “left impressions that they could be helpful to the team,” tweets Adrian Wojnarowski of ESPN. Marreese Speights, who is also being considered for a roster spot, will hold his workout today.

L.A. is scrambling to find a replacement for free agent addition DeMarcus Cousins, who suffered a torn ACL last week. No timetable has been established for Cousins’ recovery, but it’s possible he will miss the entire season.

Howard is still under contract with the Grizzlies, but they have no plans to keep him on the roster after acquiring him from the Wizards this summer in a trade to cut salary. Memphis granted permission for Howard to audition for a role with the Lakers.

Noah remains unsigned after averaging 7.1 PPG and 5.7 RPG in 42 games for the Grizzlies last season. Speights spent the past season playing in China.

The Lakers plan to work out free agent centers Joakim Noah and Marreese Speights as well as the Grizzlies’ Dwight Howard this week in Los Angeles, Adrian Wojnarowski of ESPN tweets.

Another NBA free agent, Marcin Gortat, could also come in for a look, Wojnarowski adds. The Lakers want to evaluate the physical condition and mindset of each player as they seek to replace DeMarcus Cousins.

Cousins suffered a torn ACL this month after he signed a one-year contract with the Lakers. Cousins could miss the entire season.

The Grizzlies had already granted the Lakers permission to meet with Howard. Memphis acquired him from the Wizards this offseason but he’s not part of their plans. The Grizzlies could make a trade or reach a buyout on his $5.6MM contract if the Lakers want him.

Noah averaged 7.1 PPG and 5.7 RPG in 41 games for Memphis last season after his woeful stint with the Knicks. He hasn’t drawn much attention on the free agent market, though he reportedly was being very selective about his next NBA destination.

Speights, who played in China last season, worked out in front of numerous NBA executives last month in Las Vegas.

Gortat was waived by the Clippers at the trade deadline last season and didn’t get picked up.

The Lakers currently have 14 players with guaranteed deals.

With Guerschon Yabusele set to hit waivers, the Celtics don’t have a set plan in place for their 15th roster spot, per Adam Himmelsbach of The Boston Globe (Twitter link).

As Himmelsbach explains, Boston could simply fill that spot in the coming weeks with a player, but there’s still a good chance that there will be more change coming to the roster before opening night. It’s even possible that the Celtics will add multiple players and enter training with more than 15 players on guaranteed contracts, Himmelsbach notes (via Twitter).

While Tacko Fall has been a standout for the Celtics during Summer League play, there are currently no plans for him to slide into that 15th roster spot, according to Himmelsbach, who says the plan is still for Fall to enter training camp on an Exhibit 10 contract and proceed from there (Twitter link). The Celtics are currently back to exploring the free agent market for minimum-salary targets, tweets Mark Murphy of The Boston Herald.

As Boston considers its options, here’s more on free agency:

Representatives from nearly half of the league’s teams were in attendance for a workout that included former NBA stars Amar’e Stoudemire and Monta Ellis, Chris Haynes of Yahoo Sports tweets.

The Lakers, Clippers, Warriors, Knicks, Thunder, Bucks, Pistons, Kings, Nuggets, Blazers, Magic, Hawks, Wolves and Wizards were all in attendance. Haynes adds that 15 international teams from Europe and Asia also had representatives in Las Vegas for the workout.

It’s a six-month, $2MM deal for Speights, according to Pick, who first reported two weeks ago that the big man was close to reaching a deal with the Chinese club.

Speights, who will turn 31 next month, has bounced around among several NBA teams over the course of his 10-year career, spending time with the Sixers, Grizzlies, Cavaliers, Warriors, Clippers, and Magic. In Orlando in 2017/18, he averaged 7.7 PPG and 2.6 RPG. The veteran has also improved his three-point shooting in recent years, making 1.7 threes per game at a 36.9% clip last season.

Since the Chinese season ends before the NBA season does, Speights could have the opportunity to collect $2MM and then return stateside to catch on with an NBA contender down the stretch in 2018/19.

This would be an interesting move for Speights, who is once again entering unrestricted NBA free agency next month. It suggests the offer must be substantial, since he could still fit the bill for an NBA team seeking a stretch four and veteran leadership.

Speights has bounced around the league in recent seasons and played on a veteran’s minimum contract — approximately $2.12MM — with the Magic last season. The cap hit on the contract was $1.47MM and the league paid the difference.

Speights, whose career began in 2008/09 with the Sixers, is best known for playing with the Warriors for three seasons. He won a ring in 2015.

The 6’10” Speights shot an above-average 36.9% from long range while taking a career-high 4.5 attempts per game.

Despite some unsavory long-term contracts, the Magic have plenty of cap space lined up for the 2018/19 season. For that reason, and the obvious one that they haven’t sniffed a .500 record the last six seasons, the franchise is very much a blank canvas heading forward.

Last season was the first year at the helm for new president of basketball operations Jeff Weltman and general manager John Hammond, and they played things rather safe, inking a handful of serviceable, if forgettable, veterans to modest deals and calling it an offseason. This summer we may get our first look at what their long-term plans for the franchise are.

Arron Afflalo, SG, 32 (Down) – Signed to a one-year, $2MM deal in 2017
While the once-vaunted perimeter defender previously came with a hefty price tag, the Magic managed to snag Afflalo on a cheap deal this past season. You can’t fault the squad for the speculative leadership add considering the lack of identity on the roster, but there’s no obvious reason to expect the veteran to want to return after a forgettable 2017/18. Afflalo played just 12.9 minutes per game this season and literally can’t do any worse on the open market than he did last time when he landed a minimum contract on a terrible team that couldn’t even be bothered to give him consistent playing time. That’s not a knock on either party — sometimes things just aren’t a good fit — but I expect the journeyman to seek a more substantive role for the first time since his stint in Denver.

Aaron Gordon, PF, 22 (Up) – Signed to a four-year, $18MM contract in 2014
The Magic have all the flexibility in the world to accommodate a sizable Gordon deal and the combo forward is intriguing enough to convince at least one other team to make a generous offer. While it’s hard to say with certainty that Gordon can carry this franchise on his back given that he hasn’t really done so in four seasons, it’s equally hard to fault a team for pouncing on the opportunity to lock in an All-Star-adjacent asset that hasn’t even turned 23 yet. Could Gordon yield the max contract that he’s said to be seeking? It seems within reach, even if the Magic or any other team that commits to it ends up slightly underwhelmed. 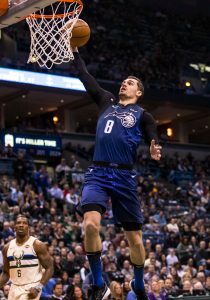 The Magic turned down the fourth-year option on Hezonja’s rookie contract and the swingman responded with the most memorable season of his young career so far. In 11 February contests Hezonja averaged 15.5 points and 5.0 rebounds per game, briefly showcasing that he could potentially be relied upon as an offensive weapon if given the opportunity. Nothing precludes the Magic from putting an offer on the table to bring him back this summer, but they can’t give him a starting salary higher than the value of the option they turned down ($5.17MM). Regardless, declining that option suggests the front office may have already made up its mind about his future with the team. Hezonja should draw interest elsewhere and could end up as a modest rotation player.

Marreese Speights, C, 30 (Up) – Signed to a one-year, $2MM deal in 2017
Speights went from chipping in for four straight Western Conference contenders to a decidedly less competitive Magic squad, but don’t overlook the fact that the veteran established himself as a leader on a team in his home state. While there won’t be a shortage of space or money to bring Speights back in 2018/19, it’s reasonable to believe he’ll at least consider offers that could put him back in a position to contend. Speights was, and remains, an intriguing stretch big capable of filling the stat sheet in limited minutes off the bench. He won’t be any team’s top priority but he’s worth more than what he made this year.

The Heat will be eligible to apply for a hardship exception after tonight’s game, writes Ira Winderman of The Sun-Sentinel. To qualify, teams must have at least four players miss three consecutive games with injuries and be ruled out for at least two more weeks by an independent medical specialist. Dion Waiters will sit out his third straight game tonight with a sprained ankle, joining Justise Winslow, who has missed eight games with a left knee sprain, and Rodney McGruder and Okaro White, who are both recovering from surgeries.

Miami, which signed White under similar circumstances last season, has a roster candidate playing for its G League affiliate, Winderman notes. Veteran swingman Alonzo Gee is averaging 17.8 points in five games with Sioux Falls. The 30-year-old, who last appeared in the NBA when he signed a 10-day contract with the Nuggets in January, has played for six teams in eight years.

Marcin Gortat, who expressed doubt about his future with the Wizards during his exit interview in May, now says he’s fully committed to the team, relays Chase Hughes of CSNMidAtlantic. Gortat, who usually spends summers in Poland, joined the team for its informal summer mini-camp this year. Now in his fifth season with the team, Gortat is signed through the 2018/19 season.

“First of all, I knew it right away that I would be coming back,” Gortat said this week on the Wizards TipOff Podcast. “I still have a contract and at the end of the day, I’m a Wizards player. I still have two fully guaranteed years. When I went for the exit interview, I was just preparing myself for the worst. You’ve gotta be ready in this business. You’ve gotta be ready that one day you might get a phone call saying that ‘Hey, I appreciate everything that you did, but we’re going to go in a different direction and trade you.’ I’ve been traded twice in my life. I know how it is. So, at the exit interview I just said I was going to talk to my agent and whatever is going to happen. That doesn’t mean I wanted to be traded.”