“I’ve been hearing those things,” the Cavaliers forward said. “But I’m just focused on my basketball because you cannot control that. That’s why whenever I stepped on a court I was just working on my game and trying to get better. It’s been six years since coming over, six years in Cleveland. I’m happy here and this is my home.”

Those rumors persist and the franchise would like to upgrade at small forward, if possible, though the fact that Cleveland is close to the luxury tax line complicates the issue, Fedor adds.

Khris Middleton won’t be ready to play by opening night as he recovers from wrist surgery. Joe Ingles is still rehabbing from a major knee injury.

So who will step up in their place? Eric Nehm of The Athletic examines potential lineup combinations the Bucks may use in their absence. Pat Connaughton will likely start until Middleton returns, though Jordan Nwora and MarJon Beauchamp will have opportunities to establish themselves as rotation pieces. Wesley Matthews and Grayson Allen will fight for minutes at shooting guard.

Free agent guard Dennis Schröder continues to make a case to NBA teams for a contract offer. He scored a team-high 26 points and added five assists until he got ejected in the late going of Germany’s 107-96 victory over Giannis Antetokounmpo and Greece in the EuroBasket quarterfinals, as Eurohoops.net relays.

Bill Russell‘s No. 6 will be retired throughout the league and another Hall of Famer, Alonzo Mourning, said it was much-deserved honor, Marc J. Spears of Andscape writes.

“We still need to celebrate his name, because he paved the way during a time where he had to deal with so many different obstacles,” Mourning said. “Not just on the court, but off the court. He paved the way for all of us.”

Mourning and Jerry West were on stage at the Hall of Fame’s annual ceremony over the weekend to honor Russell before the Class of 2022 was inducted.

JULY 11: The Knicks and Pistons have officially completed their trade, the teams announced today in a pair of press releases. 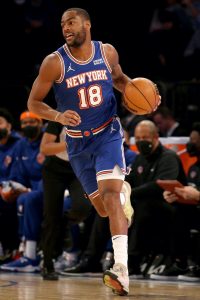 As expected, the Pistons acquired Noel, Burks, cash, and the team’s own 2023 second-round pick. The second pick Detroit received will be either Minnesota’s or New York’s 2026 second-rounder, rather than the heavily protected Miami 2024 second-rounder described below.

The Knicks, meanwhile, received the draft rights to 2015 second-rounder Nikola Radicevic and a protected 2025 second-round pick. That pick will have top-55 protection, tweets Fred Katz of The Athletic.

New York will send Detroit back its 2023 second-round pick, plus the Heat’s 2024 second-round pick (top-55 protected) and $6MM in cash as sweeteners to take those contracts off its books, Wojnarowski reports in a separate tweet.

The Pistons can absorb those salaries without sending out any contracts, since they were projected to have more cap space than any other team. The Knicks, meanwhile, should have now the cap room necessary to sign Jalen Brunson in free agency.

The Knicks and Pistons were also involved in a three-way draft-night agreement that included the Hornets. In that trade, Detroit took Kemba Walker‘s contract off New York’s books and acquired the draft rights to Jalen Duren.

The Pistons plan on keeping Burks and Noel, according to Wojnarowski (Twitter link). Burks, a 38% career 3-point shooter, will give the Pistons a perimeter threat on the wing who can help mentor the young backcourt of Cade Cunningham and rookie Jaden Ivey. Noel provides depth in the middle behind Isaiah Stewart and Duren.

Although the Hornets fired him as head coach following the 2017/18 season, Steve Clifford still had a good relationship with general manager Mitch Kupchak and owner Michael Jordan, writes Steve Reed of The Associated Press. Those ties resulted in Clifford getting his old job back after Warriors assistant Kenny Atkinson pulled out of an agreement to coach the team.

“You want to evolve and get better at what you do,” Clifford said Tuesday at his introductory press conference. “I have coached a lot more games than I had when I was here the first time and worked with another team. You learn a lot from that.”

Clifford was brought in to fix a defense that ranked 22nd in the league this season, and he told reporters that will be an emphasis. Clifford doesn’t plan major changes to the offense, which will continue with a fast-paced philosophy led by LaMelo Ball.

“We are going to play offensively with a very similar emphasis that they have played with the last couple of years,” Clifford said. “Offense starts with playing through the strengths of your best players and Ball is a great talent with a passion for the game and a flair for playing in the open court and we want to take advantage of that.”

4:53pm: The Mavericks have believed for the last couple weeks that Brunson is headed to the Knicks, according to Tim Cato of The Athletic, who tweets that it’s viewed as a virtual “certainty” at this point. 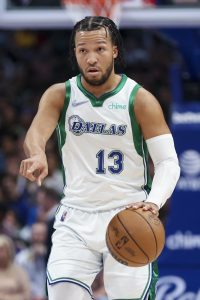 Marc Stein has heard similar rumblings, tweeting that there’s a “growing resignation” from the Mavericks‘ end that New York is Brunson’s first choice and his inevitable destination.

The Knicks project to have about $17MM in cap room if they waive Taj Gibson and his non-guaranteed salary, so they’d need to make at least one move to create the flexibility necessary to offer $25MM+ per year to Brunson. However, they could realistically get there by trading either Alec Burks or Nerlens Noel — both players have been involved in recent trade rumors, with Ian Begley of SNY.tv suggesting the Nets and Raptors are among the teams to register some interest in Noel.

Brunson and the Knicks have been linked to one another for months. As has been repeated ad nauseam, Knicks president of basketball operations Leon Rose is Brunson’s former agent, Rose’s son Sam Rose is Brunson’s current agent, and Brunson’s father Rick Brunson was recently hired as a Knicks assistant.

Still, the Mavericks had long projected confidence in their ability to re-sign Brunson. Although the point guard will be an unrestricted free agent, Dallas holds his Bird rights, giving the team the ability to offer him more money and more years than any other suitor. But the Mavs’ confidence appears to be waning with free agency right around the corner.

According to Chris Mannix of SI.com (Twitter link), part of the Knicks’ pitch to Brunson is the ability to be the full-time starting point guard. In Dallas, he’s more of a secondary option at the position, with Luka Doncic running the show.

The Knicks don’t view Brunson as a “potential franchise-altering savior,” per Begley, but rather as an important piece of the process. The 25-year-old is considered to be a good fit for the timeline of some of New York’s other young players, Begley adds.

The Mavs project to be far over the cap, limiting their ability to secure an adequate replacement for Brunson if he does head to New York. If Dallas knows Brunson is leaving, the team could attempt to work out a sign-and-trade agreement with the Knicks, but may not have much leverage to do so if New York has cap room available for a $100MM+ offer.

The Clippers and Knicks have engaged in “exploratory” discussions about a possible trade involving center Nerlens Noel, league sources Michael Scotto of HoopsHype.

The Knicks are attempting to clear the cap room necessary to make a serious run at free agent point guard Jalen Brunson and have a surplus of future draft picks to offer a team willing to take on Noel’s contract, which will pay him $9.24MM in 2022/23. Moving Noel would increase their projected cap room to approximately $25MM.

The Clippers, meanwhile, have a trade exception big enough to take on Noel’s contract without sending out any salary and may view him as a solid rotation option at center, especially if free agent big man Isaiah Hartenstein doesn’t remain in Los Angeles.

The Clippers already project to be a taxpayer and would increase their luxury tax bill exponentially by adding another $9MM+ contract to their books, but Steve Ballmer is one of the richest owners in sports, so that may not be a pressing concern. The opportunity to help an Eastern Conference club pry away a key free agent from a Western rival may also provide some extra incentive as the Clippers mull a potential deal.

Here’s more from Scotto on free agency and the trade market:

The Knicks have “legitimate optimism” about their chances of signing free agent point guard Jalen Brunson, Ian Begley of SNY.tv reports, citing people in touch with the organization since the draft.

Jake Fischer of Bleacher Report conveyed a similar sentiment during his latest podcast, suggesting that the Knicks may have moved ahead of the Mavericks as the favorites to lock up Brunson long-term this offseason (hat tip to HoopsHype).

As Begley observes, the Knicks still have some work to do if they want to create the cap room necessary to make Brunson a strong offer — trading either Alec Burks or Nerlens Noel may be the most likely path to opening up that space.

Burks underwent foot surgery this spring after the Knicks’ season ended, and while that procedure has reportedly hurt his trade value, Begley says there are still multiple teams with some interest in the veteran guard, including the Celtics.