When the Heat make the anticipated Dewayne Dedmon signing official, his contract will cover the rest of the season rather than just 10 days, writes Barry Jackson of The Miami Herald. Miami opted for a longer deal, according to Jackson, because it doesn’t expect anyone better to become available on the buyout market. Players who have appeared in at least one NBA game this season must be waived by Friday to be eligible for the postseason with their new team.

The Heat were looking for a big man who would accept not playing every game, which ruled out DeMarcus Cousins, who has since joined the Clippers on a 10-day deal. Jackson lists Ian Mahinmi, Thon Maker, Dewan Hernandez, Skal Labissiere, Tyler Zeller, Kyle Alexander, Trey Mourning, Kyle O’Quinn, Justin Patton and Anthony Tolliver as some of the names Miami considered before reaching an agreement with Dedmon.

In 2019, Dedmon signed a three-year, $40MM contract with the Kings, but he quickly lost his job as starting center. Poor three-point shooting is a major reason that Sacramento soured on him, Jackson adds, and he was eventually traded to the Hawks and then the Pistons, who released him in November.

The Heat face a deadline to add a 14th player to their roster by Thursday. If Dedmon signs then, his contract will carry a cap hit in the neighborhood of $433K. Miami would be about $314K below the tax line and could add a 15th player later this season without going into luxury tax territory.

There’s more on the Heat, all from Jackson: 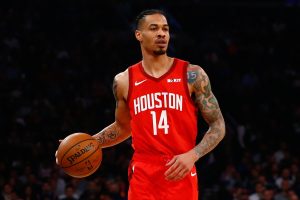 DECEMBER 15: Forward Trey Mourning will sign with the Rockets in the coming days, according to Kelly Iko of the Athletic (Twitter link). Mourning is a former Georgetown Hoya like his father, Hall-of-Fame center Alonzo Mourning, a seven-time All Star who won a title with the Heat in 2006.

Trey Mourning went undrafted in 2019, but joined the Heat’s 2019 Summer League roster. Miami’s G League affiliate, the Sioux Falls Skyforce, subsequently selected the 6’9″ forward with the No. 2 pick in the 2019 G League draft.

Mourning, who figures to sign an Exhibit 10 contract with Houston, could end up joining Houston’s G League club, the Rio Grande Valley Vipers, in Edinburg, Texas. The Vipers would have to acquire his NBAGL rights from Sioux Falls.

Lawrence played for the Cavaliers during Summer League, then signed with Hapoel Be’er Sheva in Israel. However, he parted ways with the team earlier this month after one preseason game.

Some other notable selections include:

Mourning, who spent four years at Georgetown, is the son of Hall of Fame center Alonzo Mourning. He played for the Heat during Summer League. Duval, once a highly touted point guard at Duke, was a two-way player for the Bucks for most of last season and appeared in three NBA games.

Mac, formerly known as Sheldon McClellan, got into 30 games for the Wizards during the 2016/17 season. Thabeet, the second player chosen in the 2009 NBA Draft, worked out extensively with the Knicks this summer and is hoping to return to the NBA at age 32.

Other prominent draftees include former Celtics and Lakers guard Vander Blue, the 13th pick in the second round by Santa Cruz, and Trey Phills, son of former NBA player Bobby Phills, who went to Windy City with the 18th pick in the fourth round.

The full results of this year’s draft can be found here.

Trevon Duval has signed a G League contract and is eligible for this Saturday’s draft, Adam Johnson of 2 Ways & 10 Days tweets. Duval was a two-way player for the Rockets last season and became a free agent when the team didn’t give him a qualifying offer this summer. He was claimed by Houston in March after the Bucks waived him. The former Duke guard made three cameo appearances with Milwaukee.

Power forward Jarnell Stokes has decided to remain in China for a third consecutive season, according to Emiliano Carchia of Sportando. Stokes will sign a $1.9MM contract with Xinjiang. Stokes has appeared in 28 NBA games for the Grizzlies, Heat, and Nuggets. He played five games with the Trail Blazers in the Las Vegas Summer League last month and averaged 10.6 PPG and 6.4 RPG.

We have more news from around the basketball globe:

The Heat hosted Rayjon Tucker for a three-day audition last week, according to Barry Jackson and Anthony Chiang of The Miami Herald. However, no agreement was reached because Tucker is looking for a two-way deal and Miami isn’t willing to offer more than an Exhibit 10 contract, which would have brought him to training camp with a $50K guarantee.

The 6’5″ guard was considered one of the NCAA’s top grad transfers after averaging 20.3 points and 6.7 rebounds per game at Arkansas-Little Rock last season. He committed to Memphis in May, but later decided to keep his name in the NBA draft.

Tucker played for the Bucks‘ entry in the Las Vegas Summer League and was reportedly going to sign a partially guaranteed deal with Milwaukee. However, that arrangement fell apart as the Bucks filled both two-way slots with Frank Mason III and Cameron Reynolds.

The Heat recently worked out former St. John’s guard Justin Simon, the authors add, and they believe other players have been given an opportunity as well.

There’s more out of Miami, all courtesy of Jackson and Chiang:

The Kings are known to be looking for a starting center when free agency begins on June 30, but does that mean that it’s time for Sacramento and former No. 6 overall pick Willie Cauley-Stein to part ways?

Jason Jones of The Athletic opines that even though the Kings have the ability to make Cauley-Stein a restricted free agent with a qualifying offer of just under $6.3MM, it might be best after four seasons for both sides to see what else is out there, especially if the Kings can pick up someone like Nikola Vucevic.

The 25-year-old big man had some bright spots during the 2018/19 campaign, including a hot start that helped make the Kings one of the NBA’s surprise teams to start the season. But, the Kings still feel that Cauley-Stein is an average to below-average rebounder for a big man, and his blocks per game this past season were the lowest of his career.

Perhaps more importantly, the Kings really like what they already have from young, cheaper big men like Marvin Bagley and Harry Giles, and questions still remain, fairly or not, about Cauley-Stein’s desire and focus, which the Kings aren’t sure will now suddenly change after four seasons in the NBA.

There’s more out of Sacramento this weekend:

Zion Williamson, Ja Morant, R.J. Barrett, Darius Garland, De’Andre Hunter, Jarrett Culver, Coby White, Cam Reddish and Jaxson Hayes were the first nine prospects invited to sit in the Green Room at the NBA draft, ESPN’s Jonathan Givony tweets. There were no surprises on the list, as the first eight comprise Givony’s top 8 prospects and Hayes is ranked No. 11. The invites reinforce that all nine will be selected in the lottery and probably the top 10. Another 11 invites are expected to be made, Givony adds.

We have more draft news:

We have more Southeast Division news: