8:29pm: The roster moves are official, according to a team press release.

6:56pm: Wenyen Gabriel will have his two-way contract converted to a standard contract as part of the Kings’ roster tinkering, James Ham of NBC Sports Bay Area tweets.

An opening on the 15-man roster will be created by waiving forward Tyler Lydon. As previously reported, Sacramento has claimed undrafted swingman DaQuan Jeffries from the Magic.

Jeffries will take Gabriel’s previous spot on a two-way deal, according to Ham. Rookie guard Kyle Guy has the other two-way contract.

Gabriel, 21, averaged 6.8 PPG and 5.4 RPG as a sophomore in 2017/18 at Kentucky but was not drafted. He signed a two-way contract with Sacramento last July, but has yet to make his NBA debut, spending his rookie season with the Stockton Kings. He averaged 4.8 PPG and 2.5 RPG in 12.9 MPG during four preseason games this fall.

The Kings have claimed rookie swingman DaQuan Jeffries off waivers, Shams Charania of The Athletic tweets.

Jeffries was one of five players waived by the Magic on Saturday. The 6’5” Jeffries, who played college ball at Tulsa, was ranked by ESPN’s Jonathan Givony as the fourth-best prospect who wasn’t drafted in 2019. He posted 13.0 PPG, 5.6 RPG, 1.2 BPG, and 1.0 SPG in his final college season, shooting .502/.366/.755. Jeffries made five brief appearances during Orlando’s preseason games but didn’t score.

Tyler Lydon will likely be waived to clear a roster spot for Jeffries, James Ham of NBC Sports Bay Area tweets. The former Nuggets forward signed a two-year, minimum-salary pact with Sacramento in July but only $50K was guaranteed in the first year.

As the last restricted free agent on the market this summer, Kelly Oubre may have preferred to resolve his free agency situation a little sooner. However, as Gina Mizell of The Athletic relays, Oubre – who didn’t have to wait until the fall to get a new deal like other RFAs have in recent years – had no complaints about the process after signing a new two-year, $30MM contract with the Suns.

“It was a little prolonged due to the things of the business,” Oubre said. “I was blessed enough to be able to watch it happen. Everything works out for people who put the right energy into the world. So I can’t really complain. It’s been a great two weeks.”

The Suns, meanwhile, made Oubre a priority this offseason due to the way he approaches the game, as general manager James Jones told reporters, including Mizell, this week.

“When you watch the games, you watch effort,” Jones said. “You watch the competitiveness. You watch the passion. That’s who you are. (Oubre) was consistent every game, every day. … Those are the foundational characteristics and traits that you look for in players when you talk about building a core, building a foundation.”

JULY 17: The Kings have officially signed Lydon, the team announced today in a press release.

JULY 14: The Kings have agreed to a two-year deal with free agent forward Tyler Lydon, according to ESPN’s Adrian Wojarowski (Twitter link).

The agreement is for the league minimum and also contains a partial guarantee, Sean Cunningham of ABC10 Sacramento tweets.

Lydon appeared in 25 games with the Nuggets last season, seeing an average of 3.8 minutes per contest. He was traded to Denver shortly after being selected No. 24 overall in the 2017 draft by Utah, spending part of his professional career in the NBA G League.

“I feel like I’m good enough to play in this league, and I’ll believe that ‘til the day I die,” Lydon said last week before agreeing to his deal, according to Stephen Haynes of the Poughkeepsie Journal. “It’s like, ‘Give me one chance to prove that I belong.’”

Lydon started his career with a deep Denver team that was unable to give him a clear role. His season was cut short after undergoing surgery to repair a torn meniscus, with the 23-year-old working extensively to improve his strength and shooting skills since then.

Sacramento now has 18 players on its active roster, including two-way players Kyle Guy and Wenyen Gabriel.

Tyler Lydon, Nuggets, 22, PF (Down) – Signed to a two-year, $3.45MM deal in 2017
Lydon was the 24th overall pick in 2017 and acquired from Utah in a draft-day deal. He didn’t make much of an impression as a rookie, as the Nuggets declined his third-year option in October. Lydon has appeared in 21 games this season, mostly during garbage time. At the G League level, Lydon has averaged 5.3 three-point attempts and made 36.7%. He’s also rebounded well (8.5 in 31.3 MPG). He’ll be seeking a fresh start this summer, most likely with a rebuilding team that can offer him a greater opportunity. 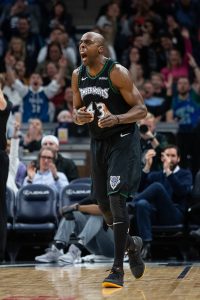 Anthony Tolliver, Timberwolves, 33, PF (Down) – Signed to a one-year, $5.75MM deal in 2018
Tolliver carved out a steady role under former Pistons coach Stan Van Gundy and delivered a career year last season. He averaged 8.9 PPG in 22.2 MPG and shot 43.6% from distance, and when he hit the free agent market, he drew interest from the Clippers, Mavericks, and Sixers as well as the Timberwolves. It hasn’t gone well in Minnesota, as Tolliver completely dropped out of Tom Thibodeau’s rotation in mid-November. He’s seen more action under Ryan Saunders but hasn’t made an impact. He’ll likely have to settle for the veteran’s minimum this summer to stay in the league.

Nerlens Noel, Thunder, 24, PF (Up) – Signed to a two-year, $3.74MM deal in 2018
Noel has a player option worth less than $2MM and it’s likely he’ll decline it and take his chances on the open market. Noel has carved out a steady bench role with the Thunder and provided a defensive presence, along with an occasional scoring outburst. His Defensive Box Plus/Minus rating, according to Basketball-Reference, is an outstanding 5.8. He posted a 22-point, 13-rebound stat line in 22 minutes in a loss to New Orleans on Thursday. Noel, the sixth overall pick in 2013, has revived his career to some extent after a lost season in Dallas.

Al-Farouq Aminu, Trail Blazers, 28, PF (Up) — Signed to a four-year, $30MM deal in 2015
The quintessential glue guy, Aminu never puts up big numbers but he does a little bit of everything for a playoff-bound team in the West. He’s averaging a career-best 7.9 RPG in 29.0 MPG and his defensive versatility makes him indispensable on a team lacking in stoppers. He’s also become a respectable – if not prolific – 3-point shooter (35.8%). It certainly wouldn’t be surprising if Aminu re-signs with Portland but he’ll have several suitors in July and shouldn’t have any trouble getting a multi-year deal.

Royce O’Neale, Jazz, 25, SF (Up)– Signed to a three-year, $3.8MM deal in 2017
O’Neale, undrafted out of Baylor, has been a rotation player all season for Utah. He’s often the the last offensive option on the court but he’s pumped up his production this month. He averaged 13.8 PPG and 4.3 RPG in the last four games prior to the All-Star break. He’s shooting an outstanding 43.9% from long range and advanced defensive metrics are also kind to him (2.2 Defensive Box Plus/Minus). O’Neale’s $1.62MM salary for next season isn’t fully guaranteed until next January but the Jazz might do that a lot sooner and perhaps even negotiate an extension with the swingman.

The Nuggets won’t pick up the third-year option on power forward Tyler Lydon, tweets Mike Singer of The Denver Post.

The 24th pick in the 2017 draft, Lydon was acquired from the Jazz as part of the return for Donovan Mitchell, who finished second in last season’s Rookie of the Year voting. Lydon spent most of the season in the G League appearing in just one game for Denver. He has played twice this season, averaging 2.0 minutes per night.

Lydon, who would have made $2,190,720 for the 2019/20 season, will instead become an unrestricted free agent next summer. The Nuggets can still re-sign him, but can’t exceed the value of his option in the first year of any new contract.

The Nuggets have officially exercised their 2019/20 team options on Jamal Murray, Juan Hernangomez, and Malik Beasley, the team confirmed today (via Twitter). Michael Scotto of The Athletic had reported on Monday that Beasley’s option would be picked up, and the other two were viewed as locks. 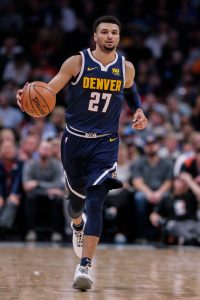 Murray, the seventh overall pick in the 2016 draft, is one of the Nuggets’ core pieces. So far this season, he’s averaging 16.7 PPG, 4.3 RPG, and 2.8 APG in six games (31.2 MPG). Hernangomez and Beasley have more modest roles in Denver’s rotation, but have been seeing fairly regular playing time in 2018/19. They’re each averaging just over 15 minutes per contest.

The Nuggets’ announcement doesn’t mention Tyler Lydon, whose third-year option for 2019/20 must also be picked up by tomorrow to avoid making him an unrestricted free agency next July. Lydon has been unable to carve out a role in Denver’s crowded power forward picture, appearing in just three games since being selected 24th overall in the 2017 draft, so the club seems likely to pass on his option.

The Hornets are expected to get  Cody Zeller involved in team scrimmages in a matter of days Rick Bonnell of The Charlotte Observer writes. The forward has been sidelined since undergoing surgery to repair a torn meniscus in mid-December.

Zeller was a critical piece of the Hornets’ rotation before his injury and will look to settle back into his new role of manning the backup center position behind Dwight Howard as soon as he’s cleared to do so.

In 19 games of action for the Hornets, Zeller has averaged 7.2 points and 5.5 rebounds per game. His return will be much appreciated by a team that’s struggled mightily in the first half of 2017/18.

There are other injury updates to report on this evening:

Here are Monday’s G League assignments and recalls from around the NBA: