Anfernee Simons‘ recent play has justified former Blazers executive Neil Olshey’s faith in him, Jason Quick of The Athletic writes. Olshey maintained that Simons was the most talented player he had ever drafted, even though he had also selected Damian Lillard, Blake Griffin and CJ McCollum during his career. A late first-rounder in 2018, Simons has averaged 28.3 PPG and 8.2 APG in his last six games. Simons will be a restricted free agent this summer.

Sixers center Andre Drummond has exited the NBA’s health and safety protocols and was in attendance at the team’s practice on Wednesday, per Keith Pompey of The Philadelphia Inquirer (Twitter link).

Drummond had been one of three Sixers players in the protocols, along with Shake Milton and Danny Green. While Green is still listed as out for Thursday’s game in Brooklyn, the team is hopeful that Milton will be able to clear the protocols and play in that game, tweets Pompey. Milton is currently considered questionable.

The hits keep coming for the NBA. While some good news has arrived regarding the health status of a handful of players, several more have been sidelined in the league’s coronavirus protocols. Here are the newest developments concerning which players have entered or exited the health and safety protocols:

Derrick Favors didn’t expect to be traded to the rebuilding Thunder, but he’s trying to make the most of the situation, as he told Tony Jones of The Athletic.

“At first, I was kind of confused,” Favors said. “I was caught off guard. But, I knew it was nothing personal. When I reflected on it from a business standpoint, I knew that something had to happen. I accepted it, and I’m in a great place.”

Favors, who scored just four points while grabbing nine rebounds against his former team on Wednesday, was a member of the Jazz for over eight years from 2011-19 before being traded to New Orleans. He re-signed with Utah in 2020 and then was traded again this offseason. The Thunder were motivated to make the deal with the Jazz by adding another future first-rounder to their stockpile of picks.

Since he hadn’t played a road game in Utah since first leaving the team in 2019, the Jazz put together a tribute video for Favors that was displayed during the first half, Sarah Todd of The Deseret News writes.

After being traded from a title contender in Utah to a fully rebuilding team in Oklahoma City this offseason, Derrick Favors admitted on Monday that the idea of not reporting to his new team and/or asking to be sent elsewhere crossed his mind. However, he said he didn’t “want to be that guy,” as Joe Mussatto of The Oklahoman relays (via Twitter).

Favors likely isn’t part of the Thunder‘s long-term plans, but he’s under contract for another year beyond this season, so the team likely won’t consider buying him out or releasing him anytime soon. As they did with veterans like Chris Paul and Al Horford, the Thunder will likely try to build up Favors’ value as much as they can before perhaps pursuing a trade at the 2022 deadline or next summer.

Here’s more out of Oklahoma City:

The Jazz remain on track to finalize an agreement on a three-year contract with Mike Conley once free agency officially opens tonight, reports Tony Jones of The Athletic. Previous reports have indicated that Utah is the strong frontrunner to bring back Conley and that the team is preparing a three-year offer in the neighborhood of $75MM for the veteran point guard. Based on Jones’ report, it sounds like that hasn’t changed and a deal could be in place later today.

The Timberwolves‘ second stint with former No. 5 overall pick Ricky Rubio wasn’t the fairy tale reunion either side hoped for, writes Jon Krawczynski of The Athletic in a breakdown of the team’s trade with Cleveland and what it means for the Wolves moving forward.

While the Wolves are receiving solid three-and-D wing Taurean Prince as the return for Rubio, Krawczynski writes that Prince isn’t viewed as the solution to the team’s long-running search for a starting power forward, but rather as a rotation wing.

One benefit to the deal is an added $4.8MM in cap flexibility, which could allow the Wolves to use their entire taxpayer mid-level exception while possibly adding last year’s first round pick Leandro Bolmaro as well. Kracwzynski writes that the team explored trades into the draft and for Hawksforward Danilo Gallinari, but in the end were satisfied with the return of Prince.

11:58am: The Thunder have officially confirmed the trade, announcing in a press release that they received Favors and a future first-round pick in exchange for a 2027 second-rounder and cash. 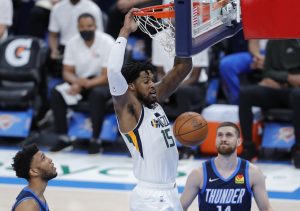 7:10am: The Thunder and Jazz are in agreement on a trade that will send Favors and a future first-round pick to Oklahoma City in exchange for a future second-rounder, reports ESPN’s Adrian Wojnarowski (via Twitter).

Utah is sending its 2022 first-round pick (top-six protected) to Memphis in another deal, so the first-rounder going to Oklahoma City figures to be in 2024 or later due to the Stepien rule.

6:40am: The Thunder and Jazz are engaged in serious talks on a potential trade that would send center Derrick Favors from Utah to Oklahoma City, according to Shams Charania and Tony Jones of The Athletic (Twitter link).

Favors, 30, signed a three-year contract with Utah last fall and posted modest numbers in his first season back with the team after a year in New Orleans. Favors averaged a career-low 5.4 PPG to go along with 5.5 RPG and 1.0 BPG in 68 games (15.3 MPG). It was his first NBA season in which he didn’t start a single game.

Favors’ contract isn’t especially onerous — he has a $9.7MM guaranteed salary for 2021/22, followed by a $10.2MM player option for 2022/23. However, it’ll likely be considered a negative asset given his dip in production last season and the fact that the Jazz are facing a serious cap crunch. If Utah re-signs Mike Conley and doesn’t dump any salary, the team will face a substantial tax bill next season.

As a point of comparison, when the Pistons agreed to send Mason Plumlee to the Hornets on Thursday, Detroit moved down 20 spots in the draft to do so (from No. 37 to 57). Plumlee was more productive in 2020/21 than Favors and is owed less guaranteed money going forward.

The Thunder are no strangers to accommodating salary dumps, having used that approach multiple times to add to their stockpile of future draft picks within the last couple years. They could take on Favors without sending any money back to the Jazz by using one of their trade exceptions or by opening up cap room once the new league year begins.

It’s unclear what sort of asset the Jazz might attach to Favors to get a deal done. There were rumors earlier in the week that they were discussing possible trades involving the big man and the No. 30 pick, but a 2021 selection is less likely to be involved now that all of those picks have been made. As such, Utah and Oklahoma City may be discussing a future draft asset.

Within his latest mock draft, Kevin O’Connor of The Ringer confirms a few items we’ve heard elsewhere in recent days. According to O’Connor, Jalen Green‘s workout with the Pistons last week was “outstanding,” the Jazz are willing to attach the No. 30 pick to Derrick Favors in a potential trade, and league sources widely expect Scottie Barnes to be the Magic‘s pick at No. 5.

O’Connor also reiterates that the Rockets continue to explore moving up to No. 1 and says the Thunder have made efforts to trade up, with Green, Cade Cunningham, and Evan Mobley among their presumed targets.

Here are a few more notes of interest from O’Connor’s latest article: