After a report earlier this week suggested the Bucks would be willing to trade starting point guard Eric Bledsoe, Jon Horst told Howard Beck of Bleacher Report in no uncertain terms that’s not the case.

“We have no talked to any teams about trading [Bledsoe], since the day that we traded for him,” the Bucks GM said. “And I think it’s evident, pretty strongly, in the fact that we extended Eric, what he means to us.

“The fact that we currently have the best record in the NBA, had the best record last year in the NBA, he’s an All-NBA First Team defender and a guy that we feel strongly should be an All-Star for the Milwaukee Bucks this year. We have not had those conversations, and we are not going to trade Eric Bledsoe.”

It’s hard to imagine the Bucks doing anything too drastic to shake up their roster at the trade deadline next month, considering the team is on a 71-win pace. Bledsoe did struggle in the postseason last spring, so he’ll be under the microscope in this year’s playoffs. If he underperforms again, perhaps Horst’s stance changes, but the veteran point guard looks safe for now.

The Warriors got a scare tonight involving D’Angelo Russell, who remained on the ground for about five minutes after colliding with the Mavericks‘ Luka Doncic while chasing a loose ball, tweets Anthony Slater of The Athletic (video link).

A stretcher was brought out, but Russell was eventually able to walk off under his own power. After being checked in the locker room, he was diagnosed with a right shoulder contusion, according to Kerith Burke of NBC Sports (Twitter link), and eventually re-entered the game.

A right fibula avulsion fracture will sideline Bucks guard Eric Bledsoe for at least two weeks, according to Ben Steele of The Milwaukee Journal Sentinel. The team announced the injury after last night’s game.

Bledsoe was hurt during the third quarter Friday in a collision with teammate Wesley Matthews. Bledsoe underwent an MRI Saturday in Milwaukee and was examined by the team doctor.

He is averaging 15.0 points, 4.9 rebounds and 5.7 assists for the Bucks, who have begun the season at a sizzling 24-3 pace. He had started all 26 games before last night.

In Bledsoe’s absence, Donte DiVincenzo moved into the starting lineup, just as he did when Khris Middleton missed seven games with a left thigh bruise.

“We got to wish Bled a fast recovery,” Giannis Antetokounmpo said. “Come back healthy and this team is going to be exactly how it is now when he gets back. “We did it (when) Khris missed a lot of games. We were able to win games without him. We got to to it without Bled. If I ever miss games, they got to do it without me. We built a winning culture around the team and everybody knows what they got to do when we step on the floor.”

Eric Bledsoe is expected to be ready for the Bucks‘ opener on Thursday, Matt Velazquez of the Milwaukee Journal Sentinel relays.

“I kind of knew what it was, in a sense,” said Bledsoe, who suffered a rib cage injury earlier in the preseason. “I knew it wasn’t nothing serious… I knew I was going to bounce back.”

Bledsoe will join Brook Lopez, Giannis Antetokounmpo, Khris Middleton and newcomer Wesley Matthews in the Bucks’ starting lineup, Velazquez adds in the same piece. Matthews will take over for Malcolm Brogdon, who was traded to the Pacers this offseason.

Pacers star Victor Oladipo scrimmaged with teammates Saturday for the first time since suffering a ruptured quad tendon in his right knee last season, Scott Agness of The Athletic writes.

“I felt good,” Oladipo said, according to Agness. “I ain’t played in nine, nine and a half months, so it felt pretty good. It felt good just being out there and making a pass, shooting a jumper, shooting a floater, layup, something. It feels like I never left at all, honestly, but I’m just taking my time.”

Oladipo, a two-time All-Star, appeared in just 36 games with Indiana last season due to the injury. He was coming off a 2017/18 campaign that saw him average a career-high 23.1 points in 75 games, holding shooting marks of 48% from the floor, 37% from deep and 80% from the charity stripe.

“You can’t really simulate playing,” Oladipo said about finally scrimmaging. “No matter how hard you try, no matter if you imagine it, dream about it, you got to go out there and actually do it — and then your body will adapt. My wind is actually really good. Probably the hardest part is not doing too much. Everything else will come. I’ve been out for nine months, so you’re not going to see any ounce of frustration on my face. S–t, I’m just happy I can play again.”

The Pacers will need a healthy Oladipo to maximize their chances of competing for a playoff berth this season, adding the likes of Malcolm Brogdon, Jeremy Lamb and T.J. McConnell in free agency to a core that already includes Oladipo, Myles Turner, T.J. Warren and others.

Oladipo plans to travel with the team for most road games, according to Agness, though it’s unclear when he’ll make his official return to the court. Indiana opens its season with a home game against Detroit on Wednesday, followed by a three-game road trip against Cleveland, Detroit and Brooklyn.

12:03pm: Bucks GM Jon Horst clarifies that Bledsoe technically fractured the cartilage between two of his ribs, and doesn’t have any broken bones, tweets Matt Velazquez of The Milwaukee Journal Sentinel. It’s possible that Bledsoe will beat his projected two-to-three-week recovery timeline, since it will come down to pain tolerance, Velazquez adds.

9:23am: Eric Bledsoe may not be available for the Bucks to start the season, according to Shams Charania of The Athletic, who reports (via Twitter) that the veteran point guard suffered a small fracture of his rib and is expected to miss up to two or three weeks.

Because he signed a four-year extension during the ’18/19 campaign though, Bledsoe is set to enter the season as Milwaukee’s starting point guard for the foreseeable future. He’ll earn about $15.6MM in 2019/20, the first year of that four-year deal.

If Bledsoe has to miss time to start the season, George Hill figures to slide into the starting five in his place. Donte DiVincenzo and/or two-way player Frank Mason could also see a bump in minutes, while Giannis Antetokounmpo might assume increased ball-handling responsibilities.

Derrick Rose signed with the Pistons this summer in pursuit a championship, he said in a Sirius XM NBA Radio interview (Twitter link). Rose, who inked a two-year, $15MM contract, feels the Pistons can contend in the Eastern Conference behind the big man duo of Blake Griffin and Andre Drummond. “While I’m in the game, I want to win a championship,” he said. “That’s what I really want to do. I’ve got all the accolades I wanted.  Now it’s time for me to get the one I really, really want. I’ve won at every level except for this level.”

We have more from around the Central Division:

The NBA has officially announced its All-Defensive teams for the 2018/19 season, with Jazz center Rudy Gobert once again coming in as the leading vote-getter. 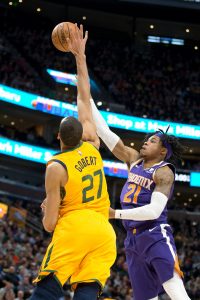 Gobert, a candidate for Defensive Player of the Year, was listed on 99 of 100 ballots, with 97 of those ballots giving him a First Team vote, for a total of 196 points (two points per First Team vote; one point per Second Team vote). The All-Defensive nod ensures that the big man receives a $500K bonus, which had been considered likely since he was named to an All-Defensive team last season, tweets ESPN’s Bobby Marks.

Pelicans guard Jrue Holiday secured a $100K bonus by earning a spot on the All-Defensive Second Team, notes Marks (via Twitter). Like Davis, he was an All-Defensive player last season as well, so that bonus had been considered likely — his cap hits for this year or next won’t be impacted by him earning it.

Raptors guard Danny Green actually totaled 66 points, including 19 First Team votes, while Clippers guard Patrick Beverley had 48 points (14 First Team votes). However, All-Defensive teams are determined by position, so they didn’t make the cut because they ranked fifth and sixth in voting among guards.

The final year of Eric Bledsoe’s $70MM contract extension with the Bucks has a $3.9MM partial guarantee in the final season, Shams Charania of The Athletic tweets. The extension became official on Monday.

Bledsoe, who is not eligible to be traded until September 4, will rank 13th in salary next season among point guards around the league, and that doesn’t include impending free agents Kemba Walker, Kyrie Irving and D’Angelo Russell, Marks adds.

We have more news from around the Central Division:

MARCH 4: The Bucks have officially signed Bledsoe to his new extension, according to NBA.com’s transactions log. 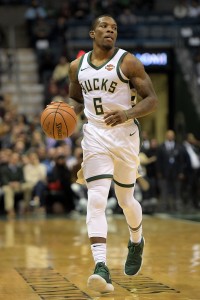 MARCH 1: Ahead of an important summer in Milwaukee, the Bucks have gotten a head start on free agency, reaching an agreement with point guard Eric Bledsoe on a four-year, $70MM contract extension, league sources tell ESPN’s Adrian Wojnarowski (Twitter link).

While Giannis Antetokounmpo is locked up through 2021, many of the Bucks’ other most important players – including Bledsoe, Khris Middleton, Malcolm Brogdon, and Brook Lopez – are in contract years. As Wojnarowski tweets, Bledsoe could have tested the market in unrestricted free agency this July, but was “determined” to stay in Milwaukee and was in position to get something done early.

Middleton and Brogdon are also technically eligible for in-season veteran extensions, but are unlikely to sign them, given their respective contract situations. In Bledsoe’s case, he was eligible to receive up to a 120% raise on his 2018/19 salary of $15MM for the first year of his new deal.

Although his starting salary could have maxed out at $18MM, it sounds – based on the reported terms – like Bledsoe will get a little less than that in 2019/20, which will help allow the Bucks to maximize their cap flexibility. Meanwhile, Milwaukee remains in good position to secure Middleton and Brogdon in the offseason, with Middleton viewed as the team’s top priority.

The Bledsoe extension is the second noteworthy Bucks move that has been reported today. The club is also set to sign Pau Gasol, who has finalized a buyout with the Spurs.

For teams eyeing the point guard market this summer, one top option is now off the board. Bledsoe probably ranked behind Kyrie Irving, Kemba Walker, and D’Angelo Russell among FA-to-be point guards, but would have been at the top of the next tier. Clubs that miss out on those top three options now figure to focus on the likes of Terry Rozier, Ricky Rubio, Derrick Rose, and Darren Collison.