Former Pistons big man Jon Leuer has announced his retirement after spending eight seasons in the NBA, the 31-year-old wrote on social media. 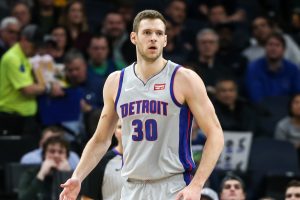 Leuer, who made stops with Milwaukee, Cleveland, Memphis, Phoenix and Detroit across his career, officially bid farewell to the game on Sunday.

“I love the game of basketball. I still want to play, but I know deep down it’s not the right decision for my health anymore,” he wrote on Instagram. “The past three years I’ve dealt with a number of injuries, including two that kept me out this whole season. It’s taken me a while to come to grips with this, but I’m truly at peace with my decision to officially retire.

“As disappointing as these injuries have been, I’m still thankful for every moment I spent playing the game. Basketball has been the most amazing journey of my life. It’s taken me places I only could’ve dreamed about as a kid. The relationships it brought me mean more than anything. I’ve been able to connect with people from all walks of life and forged lifelong bonds with many of them. What this game has brought me stretches way beyond basketball. I’m grateful for this incredible ride and everyone who helped me along the way.”

Leuer was the No. 40 pick in the 2011 NBA Draft and last played with the Pistons in April of 2019. Detroit traded him to Milwaukee last June; the Bucks later waived him in early July.

Leuer ended his career holding per-game averages of 6.4 points and 3.8 rebounds, mostly serving as a player off the bench. Perhaps his best season came during the 2016/17 campaign, which saw him average 10.2 points, four rebounds and 25.9 minutes per game in 75 contests.

Eric Nehm of The Athletic recently sat down with the Bucks’ award-winning GM Jon Horst to discuss the team’s free agency this summer. Here are a few noteworthy passages from Horst’s interview.

Regarding the team’s ability to bring back Khris Middleton on a five-year deal:

“Khris was always a focus… He’s our second superstar, our second star. He’s an All-Star. He’s been one of our best players for a long period of time here… Khris was a target obviously and he got a contract that represents that and we think it’s a great contract because we got our second All-Star locked up for the next five years.”

Regarding the team’s trade of Tony Snell and a first-round pick for Jon Leuer in order to create the requisite cap space needed to re-sign Brook Lopez:

“When we got Brook last offseason, we understood, at some level, how important he was going to be to us… (and) we also understood if he’s as good as we think he’s going to be, it’s going to present a lot of challenges.”

“So, we spent the entire year trying to prepare for that… Just different things we did throughout the year were in preparation to position ourselves to either be prepared to keep Brook, be in a position to keep Brook or be prepared to react if we couldn’t… I don’t know if a lot of people saw it coming, maybe after the Tony Snell deal. Then, maybe they were like, ‘Okay, this is how they’re going to try to do it.’ But before that, I don’t think people saw the moves we lined up to position ourselves to hopefully keep Brook and I’m very thankful we were able to.”

Regarding the decision to trade RFA Malcolm Brogdon to Indiana and whether the luxury tax was a factor in that decision:

“I think there’s a lot that goes into restricted free agency. It’s a monster. Malcolm is very, very important and we knew how important he was to our team. It will be hard to replace him. I think we’ve done the best that we can and we’ll continue to work in ways to be creative and fill that gap.”

“I would say the luxury tax was only part of the consideration for not matching or not being willing to pay Malcolm the market that he was able to get from Indiana. Whether or not he had that market from anywhere else besides Indiana, I don’t know. The decision on Malcolm was much more about our internal evaluations, the roster fit, the ability to be flexible and have options going forward and just building a team that, as I always say, can sustain success over a long period.”

There’s more from the Central Division this afternoon:
Retweet 1 Share 0 Send via email0

As expected, the Bucks have released veteran big man Jon Leuer, tweets Shams Charania of The Athletic. He’ll clear waivers and become an unrestricted on Thursday.

Leuer, 30, averaged 3.8 PPG and 2.4 RPG in 41 games (9.8 MPG) last season for the Pistons. Detroit sent his expiring contract to Milwaukee last month in exchange for Tony Snell and the No. 30 overall pick in the draft.

Because Leuer is earning less than Snell and only has one year left on his contract instead of two, waiving and stretching his expiring salary ($9,508,043) will be more manageable for the Bucks. That move was necessary in order to create the cap room to re-sign George Hill.

While stretching Leuer’s contract generates additional flexibility this year, the Bucks will have to be wary of the cap charges it creates in future seasons ($3,169,348 annually through 2021/22). Milwaukee’s roster only figures to get more expensive down the road, especially if Giannis Antetokounmpo signs a super-max extension that goes into effect in ’20/21, so Leuer’s dead money could eventually help push team salary into the tax.

Bulls executive VP John Paxson insists that Kris Dunn still has a role despite the addition of North Carolina point guard Coby White with the team’s lottery selection, K.C. Johnson of Chicago Tribune reports. “We still value Kris very much,” Paxson said. “But competition is a part of this business. You have to have that. The goal for us is to be deeper, more talented. You see in our game today, the successful teams have versatile rosters. … And, hey, if he comes in, as we hope, in training camp in great shape and ready to roll, he has every chance to earn any spot he wants — just like any of our guys do.”

JUNE 20: The trade is now official, according to a press release from the Bucks. The 30th pick was used to select Kevin Porter Jr., but the Pistons are flipping his rights to the Cavaliers.

JUNE 19: The Bucks have reached an agreement to trade Tony Snell to Detroit, tweets ESPN’s Adrian Wojnarowski. Milwaukee will get Jon Leuer in return and will also send the 30th pick in tomorrow’s draft to the Pistons (Twitter link).

Milwaukee will save about $2MM next season, along with a $1.9MM cap hold for pick No. 30, notes Matt Velazquez of The Journal-Sentinel (Twitter links). The larger savings come from having Snell off the books in the future.

Milwaukee is entering a crucial summer with Brook Lopez, Malcolm Brogdon, Khris Middleton and Nikola Mirotic all headed for free agency. Every dollar the team can unload will help with luxury tax concerns. Once the deal with Detroit is complete, the Bucks can create up to $14MM in cap room that could be used to re-sign Lopez, notes Bobby Marks of ESPN (Twitter link).

Snell, 27, was a rotation player for the Bucks this season, averaging 6.0 points per night in 74 games. Leuer appeared in just 41 games for the Pistons last season and played less than 10 minutes per night.

It’s only a matter of time before Bulls center Robin Lopez and forward Jabari Parker are either traded or bought out, suggests Darnell Mayberry of The Athletic. The Bulls are in fire sale mode and the Justin Holiday deal with the Grizzlies is just the start, Mayberry continues. Lopez has an expiring contract, while Parker has lost his rotation spot under new coach Jim Boylen. Lopez jokingly referenced in practice Friday how he could be the next shoe to drop with the front office in a seller’s mode, K.C. Johnson of the Chicago Tribune relays. “There’s kind of been a little shoe-dangling over the past couple years,” Lopez said.

The Pistons are willing to move assets to become more competitive in the Eastern Conference, but they’re not inclined to make a trade simply to dump a bad contract. That’s what senior advisor Ed Stefanski told Vince Ellis of the Detroit Free Press in a recent Q&A.

Second-year guard Luke Kennard and future first-round picks are the most likely enticements to acquire another impact player, Ellis continues. The Pistons are close to the luxury-tax line and won’t exceed it unless they can get that type of talent.

“(Pistons owner) Tom Gores would go into the luxury tax only — and I agree with this — if it would move the needle for us to be a team that would allow us to compete in the conference,” Stefanski said. “If we’re asked to give up a big asset like a first-round pick to help the growth of the franchise, we would consider it. … If we weren’t sure of that, to make a big commitment with assets, I think could really hurt us. We can’t make a deal to set the franchise back.”

The Pistons have shown a willingness to trade a first-round pick in order to get an All-Star caliber talent. They traded their 2018 first-rounder last winter as part of the Blake Griffin deal.

Pistons guard Langston Galloway has reemerged as a rotation player under new coach Dwane Casey. Galloway was a forgotten man entering camp with Reggie Bullock, Stanley Johnson, Luke Kennard and free agent signee Glenn Robinson III seemingly ahead of him at the wing positions. But Casey’s emphasis on 3-point shooting has helped Galloway, who averaged 26 MPG during the preseason, gain a rotation spot.  “I’m one of the snipers on the team,” he told me in a Detroit Free Press story. Galloway is coming off a disappointing first year with the Pistons after signing a three-year, $21MM contract in free agency. He only appeared in 58 games under former coach Stan Van Gundy, averaging 6.2 PPG in 14.9 MPG.

Pistons center Andre Drummond doesn’t plan to shoot a lot of threes but he’s thrilled that new coach Dwane Casey has given him the green light, as he told the Detroit Free Press. Casey believes if Drummond hits a couple of long range shots every game, it will create more space for everyone offensively. “The 3-point shot is something I’ve added six years ago,” he said. “I just never had a coach that allowed to me to shoot it. It’s something I’ve worked on consistently for a long time, so I guess now is my time to really showcase it.” Frontcourt partner Blake Griffin doesn’t want Drummond to stray from the basket too often.  “We still want to use Dre to his strengths because he’s one of the most dominant centers, one of the best finishers, one of the best rebounders,” Griffin said. “So it would be doing him a disservice to keep him away from the rim and doing the things he does best.”

We have more from the Pistons:

Injuries have sidetracked Jon Leuer‘s career but the Pistons will likely need him to provide minutes at both frontcourt spots during the upcoming season, Keith Langlois of Pistons.com writes in his latest mailbag. The Pistons have only two true centers and three power forwards on the roster, including Leuer, Langlois notes. He missed most of last season with an ankle injury that required surgery in January, then underwent a knee procedure this summer for a meniscus injury that occurred during a workout. He is expected to be ready by opening night.