Former NBA players Mario Chalmers and Josh Smith have both signed on to play in Ice Cube’s BIG3 basketball league this summer, according to a series of tweets from the league.

Chalmers, a two-time NBA champion with the Heat, currently plays with Virtus Bologna in Italy and is expected to join the BIG3 once his contract ends in June, as noted by Sportando. The BIG3 schedule is set to begin on June 22.

Chalmers played 66 games with the Grizzlies last season, starting in 10 contests and averaging 7.7 points, 3.7 assists and 21.5 minutes per contest. He played a key role on the Heat’s 2012 and 2013 championship teams, giving the team quality minutes as a starting point guard on both ends of the floor.

Smith, a versatile forward drafted 17th to Atlanta in 2004, holds 13 seasons of NBA experience with the Hawks, Pistons, Rockets, Clippers and Pelicans. He appeared in three games with New Orleans last season, getting waived two weeks after he was signed.

Longtime NBA veterans Joe Johnson and Al Jefferson also signed on to play in the BIG3 on Thursday, adding to a mix of talent that already includes Lamar Odom, Gilbert Arenas, Kendrick Perkins, and others.

The deadline for players to sign with the league is Tuesday, March 19. More player signing announcements are expected to be made in the coming weeks.

With the NBA G League continuing to grow season by season, there are now more ways than ever (e.g. two-way players, affiliate players, etc.) for a G League franchise to build its roster. Accordingly, Adam Johnson of 2 Ways & 10 Days asks whether the NBA’s G League draft has ultimately already run its course.

Because G League teams already have enough players committed to the season before the draft is even conducted, it’s an uphill battle for drafted players to make the team. Johnson ultimately opines that the draft should now only consist of two-to-three rounds, with only one required pick per team.

TNT analyst Charles Barkley has been outspoken about his desire to run an NBA team and he said in a recent interview that he thought the Magic were going to give him a chance last year, relays Bryan Kalbrosky of HoopsHype. Barkley told radio station 98.7 FM Arizona that he was hoping for an interview in Orlando before the organization decided on Jeff Weltman as president of basketball operations and John Hammond as GM.

“They hired another one of those analytical idiots instead of just getting the best players,” Barkley said.

Barkley expressed interest in taking over the Sixers‘ front office in 2012 and the Suns‘ in both 2010 and 2013. Barkley didn’t indicate whether he wants to be a candidate to replace Phoenix GM Ryan McDonough, who was fired earlier this week.

The Pelicans have waived veteran forward Josh Smith, according to Shams Charania of The Vertical (Twitter link). The move reduces New Orleans’ roster count from 16 to 15, since the team made use of a hardship exception to initially sign Smith.

Smith, who will turn 32 next month, barely saw any action during his two weeks with the Pelicans, appearing in three games and playing just 12 total minutes. New Orleans had added him using an extra roster spot the club was granted due to having at least four players who had missed three or more games.

It’s not clear if any of the injured Pelicans players are on the verge of returning. Based on recovery timetables announced by the team, Frank Jackson and Solomon Hill will likely be out for a while yet, but Rajon Rondo and Alexis Ajinca may be closer to getting back on the court. Omer Asik has also been sidelined this season due to health issues.

Smith, signed on October 28, received a non-guaranteed deal, so the Pelicans will only be on the hook for a small prorated portion of his minimum salary. The club will carry a cap hit of approximately $211K for Smith’s brief stint in New Orleans, as Bobby Marks of ESPN tweets.

The veterans minimum contract for Josh Smith, who formally signed with the Pelicans this afternoon after several days of waiting, will cost the team $13,156 per day, tweets Bobby Marks of ESPN. With a team salary slightly more than $122.7MM, New Orleans was roughly $1MM below the luxury tax before adding Smith. He is the latest veteran signing for a team that added Rajon Rondo and Tony Allen over the offseason, then reached a deal with Jameer Nelson after he was waived by the Nuggets.

“Being able to get this call, I feel like it was a second chance and a breath of fresh air,” Smith told Christian Boutwell of The Advocate. “I thank the New Orleans Pelicans organization for believing in me and giving me an opportunity to continue to do what I love to do.”

October 28, 4:51pm: The move is official, the Pelicans announced on their website. Smith will be available for tonight’s game against the Cavaliers.

October 28, 1:44pm: Smith will sign with the Pelicans Saturday after receiving a letter of clearance, Shams Charania of The Vertical tweets. The letter was required because Smith last played overseas, Bobby Marks of ESPN notes.

October 26, 9:34pm: Smith is in town for the Kings-Pelicans game but didn’t end up signing a contract before the game as he had hoped, Marc Spears of The Undefeated tweets. It sounds as if the deal will be finalized on Friday.

October 26, 7:17pm: Smith has flown to Sacramento, hoping to sign a contract with the Pelicans before their matchup with the Kings at 9:30 CST, Marc Spears of The Undefeated tweets.

October 25, 5:51pm: Free agent forward Josh Smith plans to sign with the Pelicans, reports Shams Charania of the Vertical (via Twitter). According to Charania, a corresponding roster move won’t be necessary for New Orleans, since the team will be granted an extra roster spot via an injury hardship exception. 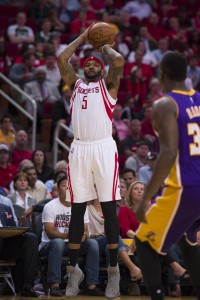 Smith, who will turn 32 in December, didn’t play in the NBA at all last season, last appearing in the league during the 2015/16 campaign. He played in 55 total games that year for the Clippers and Rockets, averaging 6.0 PPG and 3.5 RPG in 16.0 minutes per contest, with a career-worst .364 FG%.

In search of an NBA opportunity this year, Smith worked out for the Pelicans in late August. Although that audition didn’t lead to anything at the time, New Orleans is now circling back to the former first-round pick in an effort to add some depth to a roster hit hard by injuries.

Currently, the Pelicans are without Solomon Hill, Rajon Rondo, Omer Asik, Frank Jackson, and Alexis Ajinca. Anthony Davis is also banged up for New Orleans — an MRI on his injured knee reportedly showed no structural damage, but that doesn’t mean that he’ll be able to get back on the court right away.

The Pelicans are eligible for a hardship exception because they have four or more players who have missed at least three consecutive games apiece due to injury or illness. As Bobby Marks of ESPN notes (via Twitter), Smith qualifies for that 16th spot on the roster because he’s signing a non-guaranteed deal. With Smith set to join a group that already includes Rondo, DeMarcus Cousins, and Tony Allen, the Pelicans’ roster will feature some of the NBA’s most interesting personalities.

The Pelicans worked out a number of veteran players that could potentially be used to fill the void at small forward in the wake of Solomon Hill‘s hamstring injury, Adrian Wojnarowski of ESPN revealed on his podcast. Included in the workout were Josh Smith, Chase Budinger and Martell Webster.

While Wojnarowski questions the decision to bring in a handful of players with spotty track records to fill such a vital role for a Pels team with playoff intentions, New Orleans will need to come up with a solution if they can’t quickly lock down Dante Cunningham.

As we discussed on Tuesday, the Pelicans are trying to bring Cunningham back on a minimum deal but are facing strong competition from Tom Thibodeau and the Timberwolves. Cunningham has served as a spot starter for the Pels on and off over the course of the past three seasons.

Of the three vets Wojnarowski mentions to have worked out for the franchise, it’s Smith who had the most significant NBA tenure but he’s also likely the least natural small forward of the three as well.

For nine seasons Smith helped anchor a Hawks team that gradually became one of the Eastern Conference’s most reliable contenders but things began to unravel when he signed a free agent deal with the Pistons ahead of the 2013/14 campaign.

Since then, Smith has bounced from the Pistons to the Rockets and Clippers and has found himself out of the league altogether since 2015/16.

Famously criticized for his tendency to shoot long twos, Smith’s inclusion in a Pelicans rotation already built around two traditional big men causes consternation and, in the eyes of Wojnarowski, won’t exactly help the franchise woo superstar Anthony Davis, whose name has come up as a coveted trade target for the Celtics.