The Knicks fired David Fizdale earlier today while also relieving Keith Smart of his duties as assistant coach. The move comes after a 4-18 start, which ties a record for worst in franchise history.

While Fizdale repeatedly told reporters that he had owner James Dolan’s backing, Jabari Young of CNBC.com hears from an agent who represents coaches around the league that the firing was “inevitable.” Assistant coach Mike Miller will now take over as the interim head coach with 60 games to go in the season.

Former Warriors coach and Knicks guard Mark Jackson has been linked to the team as a long-term candidate for the role (any major hire is likely to come in the offseason) and Young reports that Spurs assistant Becky Hammon would be interested in the job should the team be willing to offer her a long-term deal. Young mentions four or five years as the necessary length of the contract.

Young also mentions former Coach of the Year (2007) Sam Mitchell as a good candidate for the short-term, as Mitchell has a reputation for getting top effort out of players.

After starting the season with a record of 4-18, the Knicks have fired coach David Fizdale, as Adrian Wojnarowski of ESPN.com reports. The team also fired assistant coach Keith Smart. 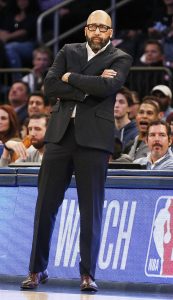 New York had another embarrassing loss on Thursday at home vs. the Nuggets, falling 129-92 to Denver and becoming only the seventh team in NBA history to lose back-to-back games by 35 points or more. Fizdale labeled the team’s effort “sickening” after the game, and was also asked by the media if the Knicks’ struggles would fall on him.

“I don’t care about all of that, I don’t even think about that really,” Fizdale said.

Back when he took the gig in 2018, Fizdale chose New York over other offers, such as positions in Charlotte, Phoenix, and Atlanta, Wojnarowski adds. Perhaps another franchise would have been more patient with Fizdale, but nevertheless, the coach finishes his New York stint with a record of 21-83.

According to Wojnarowski, Fizdale’s .202 winning percentage is the fifth-worst mark for a head coach with a single team (minimum 100 games) over the last 30 years.

Fizdale has appeared to be on the hot seat for much of the season, particularly after a November 10 postgame press conference in which executives Steve Mills and Scott Perry publicly discussed their disappointment in the club’s slow start to the season.

Fizdale becomes the first head coach to be fired during the 2019/20 NBA season, and will be replaced in the interim by Mike Miller (not the former NBA player), as we detail in a separate story. Since Fizdale was only in the second season of a four-year, $22MM deal, the Knicks will be on the hook for his remaining salary.

The Knicks continue to internally discuss the future of the franchise and whether coach David Fizdale should be a part of it. However, several factors make a mid-season firing seem unlikely.

Aside from Fizdale stating that he receives assurance from owner James Dolan after every game, Marc Berman of the New York Post hears that a lack of faith in the assistant coaches on the team is a major deterrent in letting Fizdale go. Promoting one of the assistants—Jud Buechler, Keith Smart or Kaleb Canales—is considered a “sketchy alternative” by the front office.

Fizdale has another guaranteed year on his contract after this season, so that likely plays a role as well. Unless the Knicks somehow land a superstar this offseason, it may not make sense for the team to pay the full salary of two coaches when the team is not winning games.

Developing young talent is a major goal of the franchise right now and Fizdale has produced some results early this year. He has helped install confidence in Frank Ntilikina and has given RJ Barrett an opportunity to grow. The coach isn’t going to fix everything. Players like Kevin Knox may never come around, as he’s having a second straight dreadful season, but Fizdale is getting consistent effort from his team, which can only help his cause to remain the coach of the Knicks.

Aron Baynes, who is set to hit unrestricted free agency this summer, has previously declared his interest in returning to the Celtics. Baynes once again reiterated that desire, but said he understands that the business side of the game may prevent a reunion, Adam Himmelsbach of the Boston Globe writes.

“I always want a big role. I want more of a role and I want to be able to contribute to the team more. That’s always one of those big things. That was one of the big reasons for coming here. And then how the family is. You definitely have to look out for them. And also just the living situation,” Baynes said. “Money comes into it. That’s the business side of things, but I don’t think it’s the only side of things either. So I think I showed that when I came here at the start of the season as well. I’m looking forward to it, but at the end of the day my agent is going to be doing most of the work and it’s not on me.”

Baynes signed a one-year deal with Boston last summer and produced a solid 6.0 PPG and 5.4 RPG in 81 games for Boston. However, with a healthy Daniel Theis expected to return and the Celtics possibly wanting to allocate his potential salary elsewhere, Baynes is not a lock to return.

Grizzlies assistant Keith Smart is expected to become a top assistant on David Fizdale’s staff with the Knicks, tweets ESPN’s Ian Begley. Smart was an assistant with Fizdale for two years in Miami and came to Memphis with him when he was hired as head coach in 2016.

Smart, who appeared in just two NBA games as a player, began his coaching career in 2000. He has also been an assistant with the Cavaliers, Warriors and Kings and eventually became head coach of all three franchises, compiling a 93-170 career record.

J.B. Bickerstaff, who recently had his interim tag removed by the Grizzlies, has started interviewing potential replacements in anticipation of Smart’s departure, according to Begley.

Fizdale may want to bring Howard aboard, but he remains under contract to the Heat. They would have to give him permission to leave, which Begley calls “highly unlikely.” Howard, who also interviewed for the head coaching job in New York, worked with Fizdale for several years in Miami, both as a player and a fellow assistant. He has been a Heat assistant since his playing career ended five years ago.

Begley confirms that Keith Smart, who worked with Fizdale in Memphis and Miami, is expected to join his staff. Another strong candidate is Clippers assistant Mike Woodson, who also interviewed to be the Knicks’ head coach and expressed a willingness this week to be part of Fizdale’s staff if he got the job.

Another possibility Begley mentions is Adam Johansen, a scout for the Grizzlies who also spent time with the Heat while Fizdale was there.

Markelle Fultz has been relegated to bench duty for the Sixers‘ past four postseason games as T.J. McConnell has taken over the point guard position. Fultz, the first overall pick in last year’s draft, missed most of the regular season due to a shoulder ailment that impacted his ability to shoot.

Keith Pompey of the Philadelphia Inquirer writes that Fultz’s significant time missed and the Sixers’ preference for stability is the reason for his lack of playing time. After all, Fultz missed 68 games in his rookie year and then had just 10 games regular season games to get back into a groove. Head coach Brett Brown said the team is being cautious with Fultz and will continue to do so.

“To say he’s dead and buried, that’s not true,” he said. “But I got a decision to make, and I’ve made a decision. That doesn’t mean it’s etched in stone.  It’s always something that you review and I think about. And the care for Markelle Fultz and his future is always on my mind.”

With David Fizdale and the Knicks in agreement on a four-year contract that will make the former Grizzlies coach the new head man in New York, Fizdale will now be tasked with filling out his coaching staff.

Michael Wallace of Grizzlies.com recently suggested that Fizdale could recruit some of his old Grizzlies assistants to join him elsewhere, and Stefan Bondy of The New York Daily News agrees with that assessment, tweeting that a list of potential Knicks assistants should start with Bob Bender, Keith Smart, and Nick Van Exel.

Meanwhile, Bryan Kalbrosky of HoopsHype attempts to identify a few more candidates to join the Knicks as assistants, including Juwan Howard, who spent plenty of time with Fizdale in Miami.

Here are a few more items related to the Knicks’ decision to hire Fizdale:

The Wizards announced today that the team has named Tony Brown, Sidney Lowe, Chad Iske, Mike Terpstra and Maz Trakh as assistants on head coach Scott Brooks’ staff. Eric Sebastian, director of coaching operations, and Kamran Sufi, advance scout, were also named by the team while David Adkins will stay on as the team’s director of player development, according to the press release.

“The staff we have put together here in Washington is an impressive group of basketball minds with extensive coaching experience and knowledge of the game,” said Brooks. “I look forward to working alongside this versatile group every day in our quest to bring the best out of our players.”

Here’s more of the latest from the NBA’s coaching ranks:

Hawks point guard Jeff Teague relayed today that he played the entire 2015/16 campaign with a torn patellar tendon in his knee and that he “could barely jump or stop,” Mike Mazzeo of ESPN.com writes. Teague won’t require surgery this offseason and is expected to be ready to go when training camp commences, Mazzeo adds. “He is kind of, for lack of a better word, managing his knee,” coach/executive Mike Budenholzer said. “I don’t know if it is knees and ankles. I would say it is hard to know what he shares and what he doesn’t. I think he was relatively healthy and he was good so many nights and he is such a good player. I do think he was managing it a little bit like a lot of NBA guys do.”

Teague, 27, appeared in 79 games in 2015/16, averaging 15.7 points and 5.9 assists and shooting 43.9% from the field and 40% from 3-point range. He has one year remaining on his current deal and is a potential trade candidate this offseason. Here’s more from the Eastern Conference: