Hoops Rumors is breaking down the 2019 offseason for all 30 NBA teams, revisiting the summer’s free agent signings, trades, draft picks, departures, and more. We’ll evaluate each team’s moves from the last several months and look ahead to what the 2019/20 season holds for all 30 franchises. Today, we’re focusing on the Los Angeles Lakers.

Leave it to the Lakers to pack about four offseasons’ worth of drama into a single summer. The franchise was at the center of many of the offseason’s biggest stories, experiencing some of the highest highs and lowest lows of any NBA team in June and July.

The club made one of the biggest trades in recent NBA history when it acquired Anthony Davis from the Pelicans in a blockbuster deal that saw the Lakers surrender six players, four draft picks (including three first-rounders), a pick swap, and cash. It was a huge price to pay, but Davis’ ceiling is “best basketball player in the world” and all indications point to him re-upping in Los Angeles when his current contract expires, so for now it’s hard not to call the deal a major win for the organization.

While there were still a handful of details to sort out on the Davis trade, a tentative agreement with the Pelicans was in place on June 15, less than 48 hours after the NBA Finals ended, making it one of the first moves completed this offseason. By the time June 30 finally rolled around, it was practically old news, and the Lakers had their sights set on another All-NBA target: Kawhi Leonard.

As the rest of the league’s top free agents came off the board during a 24-hour window at the start of free agency, Leonard took his time, meeting with the Lakers, Clippers, and Raptors over the course of the week and finally making his decision on the night of July 5. Despite rumblings all week that the Lakers might be the leading contender for the Finals MVP, Kawhi ultimately chose to join L.A.’s other team, giving the Clippers a rare chance to gloat at the expense of their Staples Center cohabitants — and leaving the Lakers scrambling to use their cap room on the few quality role players who remained unsigned.

After failing to secure perhaps the most talented Big Three in NBA history, the Lakers filled out their roster primarily with veteran free agents, earning mixed reviews on some of those signings. One of those newly-signed players is already on the shelf for the entire 2019/20 season, as DeMarcus Cousins suffered a torn ACL.

Still, from the moment the Lakers agreed to acquire Davis in June, any other successes the team enjoyed in the offseason were just a cherry on top of that sundae. After a disappointing 2018/19 campaign and a tumultuous spring which saw Magic Johnson abruptly resign from his president of basketball operations job, GM Rob Pelinka managed to get LeBron James a superstar running mate, adding championship upside to the roster.

Having watched D’Angelo Russell become an All-Star in Brooklyn, the Lakers will have to hope that 2016’s and 2017’s second overall picks don’t follow the same career trajectory as 2015’s No. 2 pick. Of course, if Davis can help deliver the team a title, Brandon Ingram‘s and Lonzo Ball‘s play in New Orleans may be irrelevant from the Lakers’ perspective, but it will still be fascinating to see how the duo looks away from Los Angeles.

Ingram was enjoying the best run of his career before he was diagnosed with a blood clot, averaging 22.5 PPG on .558/.406/.748 shooting in his previous 17 games. Ball, meanwhile, missed at least 30 games in each of his first two NBA seasons due to injuries and still hasn’t proven he can shoot the ball with any consistency, but has had a few moments of brilliance. The two players are entering their age-22 seasons, so there’s still time for them to deliver on the star potential they exhibited as draft prospects.

Josh Hart struggled in his sophomore season and Moritz Wagner and Isaac Bonga didn’t show a whole lot as rookies, so their departures shouldn’t shake up the Lakers’ rotation. They’re three more under-25 prospects whom the team will no longer have to worry about developing as a result of the AD blockbuster.

Elsewhere, veteran free agents Reggie Bullock, Tyson Chandler, Mike Muscala, and Lance Stephenson all departed after spending no more than a single season with the Lakers. Chandler stabilized the Lakers’ frontcourt upon his arrival early last season, but had his minutes reduced in the second half. Stephenson didn’t have a bad season, but was no longer an ideal fit in 2019/20 as the Lakers focused more on shooters than play-makers to surround James and Davis.

Meanwhile, Bullock saw his numbers slip after arriving in a pre-deadline trade, while Muscala, unfortunately, may be best remembered by Lakers fans as the underwhelming return in the Ivica Zubac trade. 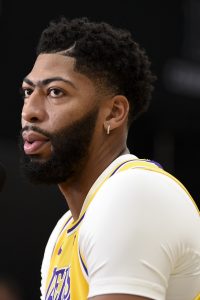 Davis’ reputation was sullied to some extent by the way his tenure in New Orleans ended, but he arrives in Los Angeles determined to put that saga behind him and to prove he should be perennially included in the MVP conversation.

He certainly has the skill set to win an MVP award — he has averaged 27.5 PPG and 11.6 RPG over the last three years, and filled up the box score by averaging 2.7 APG, 2.4 BPG, 1.4 SPG, and even 0.7 3PG during that stretch. The Lakers will simply have to figure out how to maximize the talent on their roster now that their three best players – James, Davis, and Kyle Kuzma – are all power forwards.

After missing out on Leonard, the Lakers moved quickly to sign his longtime teammate Danny Green to a lucrative two-year contract, which was a savvy move. At age 32, Green may be slowing down a little, but he has championship experience and is the sort of capable two-way wing the Lakers badly needed. He’ll help the team spread the floor on offense and can more than hold his own on the defensive end.

Speaking of defense, Avery Bradley should help improve the Lakers’ backcourt on that end of the court too. Once considered one of the league’s best perimeter defenders, Bradley hasn’t looked like his old self over the last couple seasons, but if he’s healthy, he could be a free agency steal. The club raved about his performance in camp this fall.

Quinn Cook, Troy Daniels, and Jared Dudley are among the newly-added veterans who will help fill out L.A.’s rotation. I especially liked the addition of Dudley, whose value extends beyond his modest per-game numbers.

Finally, the signing of Cousins for $3.5MM was a low-risk play, which is good, since he likely won’t suit up at all for the Lakers. Following his ACL injury, the club signed Dwight Howard to take his place on an even lower-cost, lower-risk deal — Howard’s minimum-salary contract is fully non-guaranteed.

By all accounts, Howard – who spoke after his signing about his willingness to accept any role asked of him – has been a consummate professional for the Lakers so far and looks ready to back up his comments on no longer needing to play significant minutes.

It’s difficult to get a read on the Lakers heading into the 2019/20 season. Any team with James and Davis should be taken seriously as a title contender, but there was a lot of turnover on the roster, which could create continuity issues. And it remains to be seen how the club will handle its rotation and its crunch-time lineups.

If new head coach Frank Vogel can figure things out quickly and the positional overlap of James, Davis, and Kuzma doesn’t hurt the team, it’s easy to imagine the Lakers competing for the No. 1 seed. On the other hand, if there are growing pains that extend well into the season or if LeBron or AD misses significant time with an injury, it’s not out of the question that the club will have to fight just to make the playoffs.

I expect the Lakers to snap their six-season playoff drought, and as long as they stay healthy, they look like a good bet to win at least one postseason series. How far they can go beyond that may come down to how much they get out of the supporting cast around James and Davis.

One thought on “2019 Offseason In Review: Los Angeles Lakers”