While the NBA often plays preseason games in China and regular season games in Mexico and Europe, that won’t be possible during the 2020/21 season due to the coronavirus — plans for a regular season contest in Paris had to be tabled. However, as Tim Reynolds of The Associated Press writes, the league is looking into scenarios that would allow games to be played overseas again in ’21/22.

“We do anticipate that once it becomes healthy and safe to be able to do that that we’ll return to a schedule of international preseason and regular-season games,” deputy commissioner Mark Tatum said.

Meanwhile, the 2021 All-Star Game is also in jeopardy as a result of the coronavirus pandemic, but it sounds like the NBA hasn’t entirely ruled out the possibility that some sort of All-Star event could still take place. Commissioner Adam Silver said on TNT on Tuesday that the status of the All-Star Game is “yet to be decided depending on how things go,” as Adam Zagoria of Forbes tweets.

Here are more odds and ends from around the NBA:

The NBA will resume its 2019/20 season in July, with the league’s top 22 teams taking part in the restart at Walt Disney World in Florida. However, not every player on those 22 clubs’ rosters will be participating in the resumption of the season.

Players will be permitted to voluntarily opt out of the restart for any reason without facing a fine or suspension from the NBA or their respective teams. A player who opts out would lose a portion of his pay for 2019/20, forfeiting 1/92.6th of his salary for each game missed (up to a maximum of 14 games). Otherwise though, he wouldn’t receive any additional penalty.

If a player voluntarily opts out anytime before August 14, his team can sign a “substitute player” to replace him. The replacement player will receive a rest-of-season, minimum-salary contract and will become an unrestricted free agent at season’s end, regardless of how many years of NBA service he has. Meanwhile, the player being replaced becomes ineligible to participate in the remainder of the ’19/20 season.

We’ll use this space to keep tabs on the players opting out and the substitute players replacing them. Here are the players who have voluntarily withdrawn from participating: 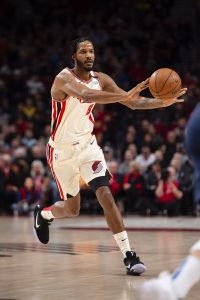 Ariza would have missed a one-month visitation period with his son if he had opted to play this summer, since family members aren’t permitted to join players on the NBA’s Disney campus until the end of August.

Jaylen Adams, who finished second this season in NBA G League MVP voting, will take Ariza’s spot on the roster as a substitute player.

Bradley is the most intriguing player to have opted out so far, since he’s the only one who’s a member of a legitimate championship contender. Although Bradley has been among the players voicing concerns about the resumption of the season drawing attention away from the fight for social justice, family considerations – including the well-being of his three children – were said to be the primary factor in his decision.

Bradley has a $5MM player option for 2020/21, so he could return to the Lakers next season. As for his replacement, L.A. has signed J.R. Smith to a rest-of-season deal.

The first player to opt out of the restart, Bertans did so because he has a history of ACL injuries and doesn’t want to jeopardize his health ahead of a potentially big payday this summer. He projects to be one of 2020’s top unrestricted free agents, following a career year, and his decision won’t affect the Wizards’ desire to re-sign him — it’s still considered a top priority for the franchise.

If Washington were higher in the standings, Bertans may have made a different decision, but the team faces long odds to even make the playoffs. And even if the Wizards do defy those odds and claim the No. 8 seed, the Bucks would likely make quick work of them in round one.

Point guard Jerian Grant has replaced Bertans on the Wizards’ roster as a subsitute player.

Cauley-Stein and his partner are expecting a newborn child in July, prompting him to skip the restart to spend time with his family. With a $2.29MM player option for 2020/21, he could still return to Dallas next season.

Despite missing Cauley-Stein and injured big man Dwight Powell in their frontcourt, the Mavs didn’t make it a priority to add another center. With Courtney Lee and Jalen Brunson also on the shelf due to injuries, Dallas instead focused on adding backcourt depth, reaching a deal with veteran guard Trey Burke to become the substitute player for Cauley-Stein.

An unrestricted free agent at season’s end, Chandler has decided to use the summer to spend more time with his family, including his grandmother (who raised him) and his three children.

Like the Mavs, Brooklyn has been hit hard by injuries, with Kevin Durant, Kyrie Irving, and Nicolas Claxton also sidelined for the return to play. Those injured players aren’t eligible to be replaced by a substitute player, but Chandler is. That substitute player is Lance Thomas, who has now signed with the Nets.

Sefolosha, who opted out on July 1, had previously expressed concerns about heading to Walt Disney World for an extended duration of time, away from his family with the coronavirus pandemic still on the rise, calling it a “huge commitment.” He’ll be an unrestricted free agent this fall, so it’s possible he has played his last game with Houston.

The Rockets have signed Luc Mbah a Moute as a replacement player for Sefolosha. Mbah a Moute has previous experience with Houston, so it should be a quick readjustment for the veteran forward.

Swanigan cited person reasons when he decided to opt out of the NBA’s restart back on July 1. He rarely saw any action for the Blazers, who decided not to sign a substitute player to replace him. Swanigan will be an unrestricted free agent this fall.

In addition to the players who are voluntarily opting out of the restart for a wide variety of reasons, there will also be players who opt out or are replaced as a result of a COVID-19 diagnosis. Here are the players who won’t participate in the remainder of the season due to a positive COVID-19 test:

Players who have been ruled out of the restart due to injuries won’t forfeit their salaries and aren’t eligible to be replaced by substitute players, so they’re not listed here. However, that growing list of players is not insignificant — it includes Bradley Beal, Kevin Durant, Kyrie Irving, and John Wall, among others.

New Trail Blazers trio Trevor Ariza, Caleb Swanigan and Wenyen Gabriel are excited for their opportunity in Portland, according to Casey Holdahl of Blazers.com. And their new teammates are looking forward to integrating them into the team’s system as 19-27 Portland competes for the eighth seed in the West.

The Trail Blazers are currently the No. 11 seed, just 2.5 games shy of the current eighth seed, the 21-24 Grizzlies. The 34 year-old Ariza appears the most likely new player to be incorporated into the current rotation. He is in the first of a two-year, $25MM contract he signed with the Kings in 2019.

“At this point, we’ve really simplified everything that we’ve done over the years, so… I don’t think it will be that hard to catch on to,” said star Trail Blazers point guard Damian Lillard. “Like today at practice, they put in some of the sets that we’ve been running, the things that we do a lot and we didn’t have to stop practice to be like ‘Alright, this what we gotta do.’ [Ariza] just kinda remembered it, it was pretty simple for him.”

JANUARY 21: The trade between the Kings and Trail Blazers is now official, according to press releases issued by both teams. 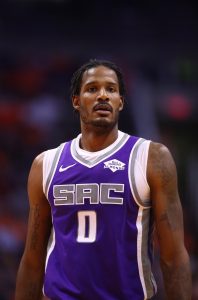 JANUARY 18: The Kings and Trail Blazers have agreed to a trade that will send Kent Bazemore and Anthony Tolliver to Sacramento in exchange for Trevor Ariza, Wenyen Gabriel, and Caleb Swanigan, reports ESPN’s Adrian Wojnarowski (via Twitter). Shams Charania of The Athletic first reported (via Twitter) that the Blazers are trading Bazemore to Sacramento.

The Kings will also receive Portland’s second-round picks in 2024 and 2025 as part of the deal, a source tells Sam Amick of The Athletic (Twitter link). ESPN’s Bobby Marks notes (via Twitter) that the swap can’t be officially completed until Tuesday, when Gabriel’s trade restriction lifts.

For Portland, the deal represents a cost-cutting move that shouldn’t impact the team’s on-court performance too drastically, if at all. Both Ariza and Bazemore have had down years so far, but Bazemore’s drop-off has been more precipitous —  he has posted a career-worst .347 FG% to go along with a .327 3PT%. Ariza is at least still knocking down his threes (.352 3PT%) at his usual career rate, even as his role was reduced in Sacramento.

Bazemore and Tolliver are earning a combined $20.89MM, compared to a total of $15.68MM for Ariza, Swanigan, and Gabriel. Besides trimming more than $5MM off the Blazers’ team salary, the deal will also reduce the organization’s projected tax bill by $12.6MM, according to Marks (via Twitter).

Additionally, the Blazers will create a pair of traded player exceptions, including one worth just over $7MM, since they have a disabled player exception available to acquire Swanigan. The team will have the opportunity to keep Ariza for the 2020/21 season if he finishes the year strong. His $12.8MM salary for ’20/21 is partially guaranteed for $1.8MM, per Basketball Insiders.

It’s not clear if Swanigan and Gabriel fit into Portland’s plans, though it’s worth noting Swanigan was originally drafted by the Blazers before being traded to the Kings a year ago. Both players are on expiring contracts. Portland won’t need to cut anyone to make room to accommodate the three incoming players, since the club already had an open roster spot.

As for the Kings’ side of the deal, Amick observes (via Twitter) that it opens up a roster spot immediately and also creates slightly more flexibility moving forward, since Bazemore and Tolliver are on expiring contracts. The Ariza signing hadn’t worked out like the franchise had hoped, so Sacramento will hope that Bazemore can bounce back and that Tolliver looks more he did when he was a member of the Kings in 2016/17 and shot .442/.391/.744.

There are no plans to buy out Bazemore, according to Chris Haynes of Yahoo Sports, who tweets that the veteran swingman has a “great relationship” with head coach Luke Walton and the Kings’ front office.

Even if the Kings’ new additions keep slumping, the team will come away with a pair of future assets in the trade by picking up the Blazers’ 2024 and 2025 second-round picks. Sacramento had already acquired multiple extra second-rounders for 2020 and 2021, so the team is building up quite a stash of draft picks, which could be useful in future deals.

Here are Sunday’s assignments and recalls from around the NBA G League:

Here are Friday’s G League assignments and recalls from around the NBA: