After briefly having no players in the NBA’s health and safety protocols for the first time in weeks, the Raptors placed Svi Mykhailiuk and Yuta Watanabe in the protocols today, tweets Eric Koreen of The Athletic.

According to Josh Lewenberg of TSN.ca (via Twitter), only three players on the Raptors’ roster have avoided entering the protocols in the last month. Two of those players – David Johnson (injury) and Goran Dragic (personal) – have been away from the team, leaving Chris Boucher as the lone active player not to be affected.

Celtics reserve point guard Dennis Schröder has entered the NBA’s health and safety protocols and will not play in today’s Christmas game against the Bucks, the team has announced (Twitter link). He joins eight other Celtics in the protocols.

In a more positive twist, Juancho Hernangómez, Jabari Parker, and Brodric Thomas have exited the league’s COVID-19 protocols and are available for today’s game, per Jared Weiss of The Athletic (via Twitter). Guards Marcus Smart, who has been dealing with a hip injury, and Romeo Langford, who has missed time due to an Achilles injury, are also available. Boston center Al Horford is out of the league’s coronavirus protocols but is still working on his conditioning and has been ruled out for the contest.

Celtics center Enes Kanter Freedom has entered the NBA’s health and safety protocols, according to Shams Charania of The Athletic (Twitter link). Freedom was out of the rotation during the first month of the season, but had appeared in 19 straight games for Boston and even played 40 minutes in his first start of the season on Monday vs. Philadelphia.

As our tracker shows, the Celtics now have eight players in the COVID-19 protocols. They’re probably still a few days away from some of those players returning, since all of them have entered the protocols in the last week.

“He’s the best player in the league, for sure,” Randle raved on Monday. “[I’ve] never seen a 7-footer that skilled… [He can] do anything, everything, on the court. No weakness. That’s him. He’s tough. Great player, but I love competing against him.”

Lakers superstar LeBron James offered his thoughts about the comments recently made by Celtics big man Enes Kanter, addressing the ongoing feud between the two after Saturday’s game.

Kanter recently called out James on social media, writing, “Money over Morals for the “King.” Sad and disgusting how these athletes pretend they care about social justice. They really do “shut up & dribble” when Big Boss says so. Did you educate yourself about the slave labor that made your shoes or is that not part of your research?”

When asked about the post, James noted that he typically doesn’t bother engaging. But, as mentioned previously, this isn’t the first time the pair has had an issue, which includes a face-to-face altercation during a game back in 2017.

“I think if you know me, you know I don’t give too many people my energy,” James explained, as relayed by Analis Bailey of USA TODAY. “He’s definitely not someone I would give my energy to. He’s trying to use my name to create an opportunity for himself. I definitely won’t comment too much on that.

“He’s always had a word or two to say in my direction, and as a man, if you’ve got an issue with somebody, you really come up to him. He had his opportunity tonight. I seen him in the hallway, and he walked right by me.”

Entering Monday’s game, Celtics center Enes Kanter has appeared in just two games this season, logging less than total 10 minutes in his latest stint in Boston. Kanter, who has been an outspoken critic of the Chinese government, published a social media post on Sunday implying that there may be a connection between his limited role on the court and his political stances off of it.

Speaking to reporters on Monday, Celtics head coach Ime Udoka dismissed the idea that Kanter has been out of the rotation due to his comments in the press and on social media.

“My thing is strictly basketball,” Udoka said, per Chris Forsberg of NBC Sports Boston (Twitter link). “We’re switching a lot and doing some things that probably are not as natural for him and that’s limited his time to some extent … Nothing basketball-related will be based on [social media].”

Kanter ended up seeing a little action on Monday in Cleveland, scoring five points in eight minutes as Boston defeated the Cavs by a score of 98-92.

Knicks guard Evan Fournier made an impressive debut against his former team, posting 32 points, six rebounds, four steals and three assists in a double OT victory over the Celtics on Wednesday. Fournier struggled with his shooting in preseason games, but coach Tom Thibodeau wasn’t fazed, according to Zach Brazilier of the New York Post. “I was never worried about him making shots,” he said. “To me, he has proven throughout his career that that is who he is.” Fournier was acquired in a sign-and-trade with his four-year contract worth up to 78MM.

Stevens pointed out that Boston has 16 players on standard contracts (15 guaranteed salaries, plus Jabari Parker‘s non-guaranteed deal) and said he’s comfortable bringing this group to training camp, noting that any additional moves will likely be “tweaks around the edge” (Twitter links via Keith Smith of Spotrac).

The Celtics do still have one open two-way slot, and Stevens said the team is still considering how to fill it. There’s no rush to do so, since Boston could end up targeting a player who gets waived by another team this fall, according to Stevens (Twitter link via Smith).

AUGUST 13: Kanter has officially signed his contract, according to a team press release. 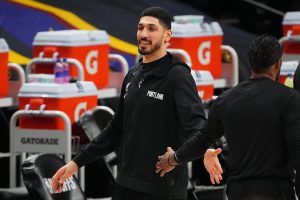 “Enes has a unique ability to both score and rebound. Beyond his on-court contributions, he is a great teammate. We are thrilled he chose to return to Boston,” Celtics president Brad Stevens said in a statement.

AUGUST 4, 11:21am: Kanter’s one-year deal will be worth $2.7MM, according to Adam Himmelsbach of The Boston Globe (Twitter link).

The veteran’s minimum for a player with Kanter’s 10+ years of experience is about $2.64MM, so it sounds this will be a minimum-salary contract.

However, Jared Weiss of The Athletic (Twitter link) says there’s still a chance the C’s could bump up that number and use part of the mid-level exception to complete the signing, depending on how the rest of the week plays out. Mark Murphy of The Boston Herald (Twitter link) hears that the club has “three or four balls still in the air,” albeit nothing too major.

10:58am: The Celtics have reached an agreement to bring back veteran center Enes Kanter on a one-year contract, reports Shams Charania of The Athletic (Twitter link).

Kanter has bounced back and forth between Boston and Portland during the last few seasons. He finished the 2018/19 campaign with the Trail Blazers, spent ’19/20 with the Celtics, rejoined the Blazers for ’20/21, and is now headed back to the C’s for the coming season.

Kanter is a reliable scorer and rebounder, who played in all 72 games for Portland in 2020/21 and averaged a double-double (11.2 PPG, 11.0 RPG) while logging just 24.4 minutes per game. He’s not a strong defender, but he’ll fill a hole in the Celtics’ frontcourt following the departure of veteran center Tristan Thompson, who is being traded to Sacramento.

It’s an interesting signing from an optics standpoint for the Celtics, who essentially salary-dumped Kanter a year ago when they sent his contract to Memphis along with the No. 30 pick in the draft (Desmond Bane) in exchange for two future second-rounders. A year later, new president of basketball operations Brad Stevens is signing up for a reunion with the 29-year-old.

The Trail Blazers made a splash on Thursday by agreeing to acquire Norman Powell from the Raptors. They’ll also add another key piece in-house, as center Jusuf Nurkic is ready to return from a lengthy absence. The big man tweets he’ll be in the lineup against the Magic on Friday.

Nurkic underwent surgery on January 19 to repair a fracture in his right wrist. He suffered his latest major injury against the Pacers while attempting to block a shot. He was cleared to play this week.

Nurkic has a partially guaranteed base salary of $12MM next season. He’s guaranteed $4MM and the Trail Blazers will have to decide whether to give him a full guarantee this summer.

Enes Kanter, who is averaging 12.1 PPG and 11.6 RPG, will return to a second-unit role with Nurkic back in action.